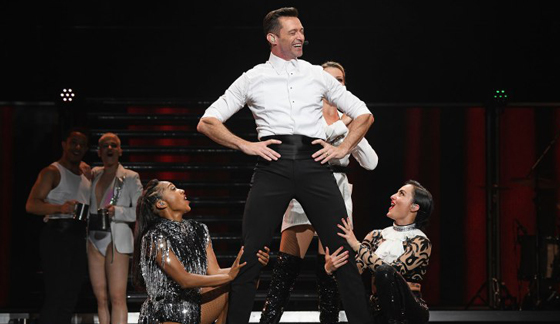 Most people know Hugh Jackman as the claw sprouting X-man known as Wolverine.  And if that’s all they know him as, shame on them.  True fans know him as the Oscar-nominated, Tony Award winning actor whose been singing and dancing for years.  And it was those fans that were in attendance at the United Center in Chicago as Jackman continues his very successful tour.

The show kicked off with a rousing performance of “The Greatest Show,” followed by “Come Alive,” both from the very popular film “The Greatest Showman.”  While performing, Jackman noticed a fan holding up a sign stating it was her birthday.  He very graciously bent down to give her a hug as well as take a selfie with her.  He then noted that it was technically his birthday already in Australia (he turned 51 on October 12).  While addressing the audience he noticed a young boy down below in the floor audience who was dressed up like Jackman in “The Greatest Showman.”  He climbed off the stage to say hello to the boy and received a huge hug from the boy.  Returning to the stage, he explained how his first stage musical was “Beauty and the Beast,” then proceeded to perform the song “Gaston.”

He shared some information about his wife of 23 years and then sat down at the piano to play (and sing) “All the Way.”  After a medley saluting New York City he told a story about how he had worked on “The Greatest Showman” for eight years before it was made.  He also noted how there had been multiple workshops for the film and that Keala Settle had participated in all of them.  He then introduced Ms. Settle, who pretty much brought the house down with a rousing rendition of “This is Me.”  After performing a song from her upcoming album, Jackman returned to the stage and closed the first act with a few numbers from “Les Miserables,” accompanied by an enthusiastic group of singers and dancers.

The second act opened with a clip of Jackman receiving the Tony Award for his portrayal of songwriter and performer Peter Allen in “The Boy from Oz.”  Jackman took to the stage AS Peter Allen and sang a few of the songs Allen had written/co-written in his career.    The amazing dancing continued as he performed a song – “A Million Dreams” – which included sign language which was part of the choreography.  Between numbers, Jackman continually told great stories and would occasionally wander into the audience to greet concert goers.  At one point, he addressed the audience as honestly as I’ve ever head a performer, thanking all in attendance for not only supporting him but for taking the tine and spending the money to do so.  This is a man who not only appreciates his fans but goes out of his way to let him know so.

A couple of Aboriginal songs, complete with Didgeradoos helped close the show, along with Jackman doing a moving version of “Somewhere Over the Rainbow.”  All in all, it was an amazing night with an amazing talent!

Mr. Jackman’s tour is continuing throughout North America.  To see if he’s coming to your town, click HERE!

The Greatest Show, Come Alive, Gaston, All the Way, New York, New York/On Broadway/Empire State of Mind, This is Me, Harder, Valjean’s Soliloquy/I Dreamed a Dream/One Day More, Not the Boy Next Door, Arthur’s Theme (Best That You Can Do)/Don’t Cry Out Loud/ I Honestly Love You/ Quiet Please, There’s a Lady on Stage/ I Go to Rio, Tenterfield Saddler, A Million Dreams, Luck Be a Lady/ Singin’ in he Rain/ I Got Rhythm/Steppin’ Out With My Baby/ Sing Sing Sing, 42nd Street/Thunderstruck, Art Song, Inhibition, Somewhere Over the Rainbow, From Now On, Once Before I Go 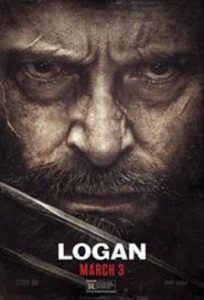 Thank you Deadpool. It was just a year ago when your film came out and you proved to Hollywood that a well-made “R” rated comic book movie CAN make money. Not sure if you planned on doing $135 million opening weekend but God bless you. After years of PG-13 films where there seemed to be no visual consequences from the damages done, filmmakers can now decide on whether to be as graphic as some of the source material they are using. The year’s first entry features everybody’s favorite X-man, the Wolverine, in “Logan.”

The year is 2029. When we first meet up with Logan (Jackman) he is a limo driver whose ride is about to be jacked by a gang of ruffians. Gray-haired and looking haggard, he implores the thieves to try their luck somewhere else, only to be answered with a shotgun blast to the chest. As the Waco kid said to Sheriff Bart in “Blazing Saddles” when talking about Mongo, “don’t shoot him…you’ll only make him mad!” And mad he becomes, springing his adamantium claws and making mincemeat of his attackers. Literally minced meat. Arms are severed, eyes gouged out, blood spurts. And this is only five minutes into the film! This isn’t your father’s Wolverine.

Packed with wall to wall action, “Logan” is a fitting ending to Hugh Jackman’s association with Wolverine. Counting cameos in other films, this is Jackman’s 10th appearance in the role that made him a star and he uses that history to his advantage. He not only knows the character he IS the character. And here he has a little help. Mutants are literally non-existent in the future and he earns his money driving a limo so that he can take care of Professor Xavier (Stewart) who he is hiding in an old junk yard and assisted by Caliban (Stephen Merchant) an Albino whose aversion to the sun is more real than Count Dracula. Logan finds himself constantly being bothered by a young woman asking for his help. He finally comes into contact with Laura (Keen), a precocious pre-teen who also has the ability to spring claws. Unfortunately, unlike Logan, Laura really has no filter on her powers so she might kill you for a can of Pringles. Laura was part of a medical experiment where a Dr. Rice (Richard E. Grant) supervised the creation of children but with the mutant powers he wished them to have. Ironically, the kids have been raised on X-men comics, so they think there is a place for them out in the world.

In a wise choice, this film is directed by James Mangold, who has given us some great personal drams like “Copland” and “Walk the Line” and his presence behind the camera (and with script duties) helps keep the film grounded. In between the violent encounters, and fans with younger children I do urge you to use caution before you bring them to this, is an emotional payoff that will stick with you. But it Jackman’s film and Jackman’s character that you will leave the theatre remembering.