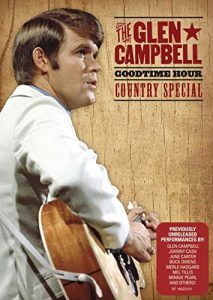 For the first time on DVD join country superstar Glen Campbell for a spectacular celebration of music with “The Glen Campbell Goodtime Hour Country Special”. The DVD is being released via Shout! Factory and features a pair of episodes from Glen’s variety show which aired on January 1st 1972.The release is packed full of laughter and music including performances by Johnny Cash, June Carter, Buck Owens, Merle Haggard, Jerry Reed, Mel Tillis and Minnie Pearl.

A release in this genre is something that’s generally not on my radar being that I am not a huge country fan. However having heard my fair share of classic country growing up something about this DVD caught my attention. What stands out about this release is the caliber of guests who appear. Everyone from Merle Haggard and Jerry Reed to Johnny Cash and Buck Owners are on here performing either solo, with Glen or as a group. This was something I really enjoyed as the show comes off very light and fun. Throw in some skits by Minnie Pearl, Mel Tillis and beardless Merle Haggard and you have a fun 90 minute video.

I can’t say enough good things about Shout! Factory as they truly do a great job bringing back vintage television specials and series. “The Glen Campbell Goodtime Hour Country Special” is no exception as both the audio and video are crystal clear. There were one or two spots where the audio was a touch out of sync however it wasn’t enough to even cause a bump in the entertainment factor. If you grew up watching this show or are a fan of some of the artists I named who appear on this release definitely grab a copy as it’s a fun trip down memory lane. 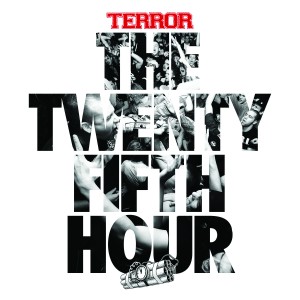 Los Angeles hardcore band Terror is back with a brand new full length album titled “The Twenty Fifth Hour”. This is the bands 6th studio album and the follow up to the groups 2013 release “Live by the Code” which was also released via Victory Records.

“The Twenty Fifth Hour” immediately picks up where the bands previous release left off. Vocalist Scott Vogel hits the ground running with lyrics that speak true to the daily struggles that even someone completely removed from the hardcore scene can relate to. Tracks like “No Time For Fools” with its classic hardcore mid section break down to “Blinded By the Lights” which features a crescendoed ending adds to the proverbial icing on the cake to an already excitable track. “Trust No Face” which features an intense guest performance by No Warning vocalist Ben Cook is definitely worth a listen as is the albums closing track “Deep Rooted”.

Terror once again proves why they are easily one of my favorite hardcore bands out there. The band pulls no punches in its approach both lyrically and instrumentally as “The Twenty Fifth Hour” gives you something to think about while also providing you with some killer opportunities to bob your head to the beat. Though the album only clocks in at just over 22 minutes that brief period of time is utilized to its maximum potential.

Track Listing:
The 25th Hour
No Time For Fools
Bad Signs
Feed the Rats
The Solution
Blinded By the Lights
Trust No Face (Feat. Ben Cook)
Why?
Mind At War
Snap
Sick and Tired
Life Goes On
Both of You
Deep Rooted 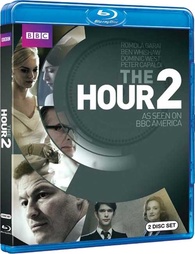 When I saw the first series of “The Hour”, I had no idea about it but fell madly in love. I had known of (and even met) Dominic West and was a big fan but no one else. Since the first season, Ben Whishaw is now one of my favs after his amazing role in “Cloud Atlas” and even “Skyfall”. There has been a huge gap between the first and season series of “The Hour” and I had my fingers very tight for more.  Luckily BBC came to its senses and signed up for more of this very gripping show.  There is something about it that really delivers and keep your entertained from the minute each episode starts. Abi Morgan is the creator of this show and also the screenwriter of the Oscar winning “The Iron Lady”.  She really set you up to sit on the end of every word spoken by this wonderful cast.  I feel that the second series is a nice improvement over the first season and I can’t wait till series 3! I just hope we won’t have to wait as long.

Official Premise: Season Two rejoins “The Hour” team in 1957 with the introduction of two new characters played by Capaldi (The Thick Of It, The Nativity), Tointon (The Inbetweeners) and Burke (State of Play). They strive to broadcast the stories they believe in while grappling with the looming specter of the Cold War and changing social mores. With the emergence of the Space Race and the threat of nuclear annihilation looming, Britain grapples with an era of unprecedented scientific advancement, economic opportunity and cultural change in the face of new immigration from the Commonwealth. The members of “The Hour” team live in a world of cover-ups, sexual intrigues and lurking fascism.

This is the first time that this show has aired on BBC America during its original broadcast and hopefully it left enough of an imprint to grab a new audience.  The episodes on the Blu-ray look much better in their 1080p transfer then they did on television.  The audio on this Blu-ray includes a sharp DTS-HD 2.0 track, which works with the dialogue and the score.  Last series, Daniel Giorgetti delivered some really great music. This season Kevin Sargent take over and continues making this show very intense and nail biting through the score. This two-disc Blu-ray set contains all six second-series episodes. I wish this series was longer than just six episodes but what is good is that they work well for repeat viewings.  The bad part of the release is that there is only one behind-the-scene featurette. 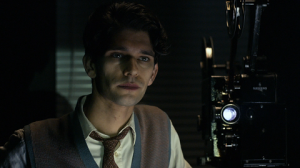 I have not heard of this show until it showed up on my door to review. The only program I watch on BBC is “Doctor Who” but boy, I am glad I had the chance to review this series. The only problem I had with this series is that it is only a six part series like most shows on BBC. I would have loved to see more of this show but don’t worry it is confirmed for a second series. The combination of music, acting and fast dialogue makes this show very interesting. Not only that but it is also funny, it is romantic and it is suspenseful..you can expect that and more within “The Hour” (pun intended).

The series is a period drama set in 1956, it generally follows three people Freddie Lyon (Ben Whishaw), Hector Madden (Dominic West) and Bel Rowley (Romola Garai) as they set out to start a news program called “The Hour”. Hector is the face of the show, Bel is the producer and Freddie is the heart and its driving force. Freddie is trying to investigate the mystery behind the death of his friend, which delves a lot deeper into government conspiracies that he expects.  The trio are also involved in this love triangle is starts subtle and then explodes as the series goes on.  They push the limits with their news as they are under constant watch from the government since they are in times of war.  How far will they go to report the news and who/what will get in their way?

The cast is so phenomonal lead by Ben Whishaw, which is just stunning to watch on the screen and captures you with every word spoken.  Dominic West is such an amazing actor and really shines in this role.  I had the pleasure of meeting him in over 10 years ago before he hit it big with “The Wire” and he is just such a lovely person. Romola Garai is also fantastic playing the strong woman, yet in dire need of love, producer.  She is just so emotionally charged in this series and especially with the events from the finale, I can’t wait to see where her character goes.

Also a must to note is the music, it is so fantastic. It has a noir feel and helps with pacing each episode so well. The picture is fantastic and the sound is superb on Blu-ray. I wish I could say the same for the extras though since they are in SD not HD and there are only two features. The first is a behind the scenes, which runs about 10 minutes and takes a look into the making the series for i.e. it’s production design and cinematography. I did really enjoy the extra “Creating The Hour”, which runs about 20 minutes, which is also a behind the scenes making-of feature. It focuses a lot of the concept of the show and its characters.

Synopsis:
Set behind the scenes of the BBC newsroom, just as an investigative news program is launched, the drama plots the personal lives, professional interplay and jealous ambition between aspiring but renegade journalist Freddie Lyon (Whishaw), the beautiful ambitious young producer Bel Rowley (Garai) with whom he is in love, and his handsome rival Hector Madden (West), the face and lead anchorman of this rising television news team. The Hour plays out as a riveting thriller set against the backdrop of the Cold War.

Viewers witness the decade on the threshold of change – from the ruthless sexual politics behind the polite social façade of the ‘50s to the revelations that redefined the world for a new generation. Over the six episodes, the interplay and intense ambitions between the rising news team plays out against the backdrop of a mysterious murder and Freddie’s controversial and dangerous investigation.