Pete Griffin is a Grammy Award-winning bassist who has worked with everyone from Dweezil Zappa and Steve Vai to Edgar Winter and Dethklok. Griffin’s latest musical endeavor is that of Giraffe Tongue Orchestra a group whose members also include Brent Hinds of Mastodon, Ben Weinman of Dillinger Escape Plan and William DuVall of Alice In Chains. The group released their debut album titled “Broken Lines” in September and is hitting the road this month in support of the release. Media Mikes had the chance to talk with Pete recently about the bands formation, the creation of the album and what fans can expect from the upcoming tour.

Adam Lawton: How did the group initially come together and what is the story behind its unique name?

Pete Griffin: Ben and Brent had been touring together off and on for a decade with their respective bands Dillinger Escape Plan and Mastodon. Even though their sounds are a bit different there groups are both heavy and are very forward thinking. They have been friends and co-workers for some time. Those guys started kicking ideas back and forth and they ended up being better than the average ideas one might pass along. This all started back about eight years ago. The idea for the group has been around for some times and there have been various rhythm sections and recording sessions that didn’t yield any solid results. Last year I got a text from Brent after meeting him while I was out with Dweezil Zappa. I got asked to come and jam with those guys and we started working on a song that would end up being titled “Crucifixion”. They had already started working on things before I got there so I just walked in and just started going. It was at that moment that I think we all agreed there was something there. A month later we tracked the rest of the record with no vocalist. During that time Ben and I were having some pretty hilarious text messages back and forth about who we should get to sing. We were throwing out names like Sting and Paul McCartney which were just pipedream ideas. Around this same time Brent ran in to William in Atlanta and asked him if he would be interested in doing the record. The name of the group was already in place by the time I came along. I think it was one of those flash in the pan ideas where they saw a nature documentary about giraffes and you got to have a band name so there you go. On the flip side you have the abbreviation GTO which when you read it often gives people thoughts of the muscle car which is a hard driving automobile. I think that is a pretty accurate description of our sound as well so in a silly backhanded way it became a good moniker for us.

AL: Are the songs that make up “Broken Lines” ones that were already put together before you joined the group or is this an entirely new group of tracks?

PG: About seventy five percent of the songs were blocked out before I came in. The parts were all there but the bass lines may have needed some tweaking. We also may have done some arrangement changes but Ben had demos for three quarters of the album. When we got together we wrote three more songs as a band and things went from there. The last song we did was put together from three different jams we had recorded. We came up with a way to put them all together and make them work as one song. The interesting thing about that was going back and learning that song in its new form. Now that we have done it a few times its one of the more fun songs to play as it jumps around quite a bit.

AL: The group made some ties recently to “The Walking Dead” television series can you tells us how that all happened?

PG: Bear McCreary who is the composer on the show is a good friend of mine. I have worked with Bear for many years now on a number of his other projects. Have yet to work on “The Walking Dead” but I have done stuff for “Black Sails” and a bunch of other movie score stuff. I had let some of my music friends know about the new album when it came out so they could check it out and a couple weeks letter Bear made a post telling people to go check it out as well. It was cool to get the praise from him.

AL: What can fans anticipate from the upcoming live shows?

PG: So far I know we are going to be performing the full record. With the record being only forty five minutes I am sure we are going to be looking to add some other material or do some extended jamming but we will have to see. At this point we are still experimenting with who we are live. We did two festival shows in England but other than that this is all still very new. It’s definitely going to be a great show though every night we get up there. I am really excited to get things going. A couple days before the tour starts we are all heading out to Ben’s in New Jersey to put everything together so it’s going to be a lot of fun.

AL: This tour runs through mid-December. Have there been any talks of what you and the band have planned for the remainder of the year and into 2017?

PG: Currently after December there isn’t anything else booked for Giraffe Tongue. That doesn’t mean that there won’t be anything else as I would love to keep doing this but nothing is scheduled for right now. Personally for me after this tour wraps up I have a pretty quite rest of the year. Going in to next year I will be working with Paul Gilbert in January and February as we will be going down to Brazil which I am definitely excited for. Ben will be out with Dillinger in Europe promoting their last album and Brent has a new album with Mastodon coming out. It’s going to be a busy 2017 for all of us. That’s something fans should consider when thinking about coming to see Giraffe Tongue Orchestra is this could one of the few times you will get to this project live. That fact also will make the shows even more special. 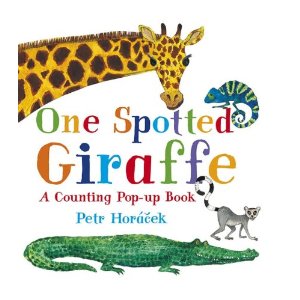 My daughter is only five months old, so she is far away from counting just yet but this book as already gotten her attention her early. In “One Spotted Giraffe”, we get a chance to count from one spotted giraffe to ten darting fish. In this very smart use of a pop-up book, this book takes something that would be concerned learning and makes it fun. It is authored and illustrator beautifully by Petr Horácek. I will be certainly seeking out other books that he has done.

Synopsis: Very young children can identify animals, count them, and discover numerals in this stand-out selection. Spreads filled with realistic depictions of colorful creatures — everything from pandas to lemurs — entice readers to count the animals, then flip the flap to reveal a corresponding pop-up numeral. And then the surprise: the numeral looks just like the animal — fur, spots, stripes, and all! Toddlers and preschoolers will delight in this bold, innovative concept book, a fantastic tool for making numbers noticeable for little learners.

Petr Horácek creates this book since he is inspired by his two daughters. Inspiration is a very powerful tool and when used right can provoke many wonderful results. Some of his other books include “Silly Suzy Goose” and “Strawberries Are Red”. I myself have become very inspired to do many new things in the short five months of having a child, so I believe in this very strongly.