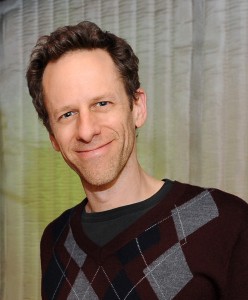 Craig Gerber is the co-executive producer/writer of Disney Junior’s “Sofia the First: Once Upon a Princess”. Disney will introduce its first little girl princess with the debut of “Sofia the First: Once Upon A Princess,” an enchanting, music-filled animated Disney Junior television movie for the whole family, Sunday November 18 on Disney Channel and Thursday and November 22 on Disney Junior, the 24-hour channel. The primetime television movie special stars Ariel Winter (“Modern Family”) as the voice of Sofia, Sara Ramirez (“Grey’s Anatomy”) as her mother, Queen Miranda; Wayne Brady (“Let’s Make A Deal”) as Clover, a wise-talking Rabbit; and Tim Gunn (“Project Runway”) as Baileywick, the family’s Royal Steward. A television series of “Sofia the First”  will debut in early 2013 on Disney Junior, as well. Media Mikes had a chance to chat with Craig about how this show was created and what we can expect.

Mike Gencarelli: Tell us how “Sofia the First: Once Upon a Princess” was born?
Craig Gerber: A few years ago, I was approached by Nancy Kanter at Disney Junior because they were looking to create a TV show centered around a princess for 2-7 year old children. She asked me flat out if I had any ideas, so I said I would think about it. So I got in my car and was stuck in traffic, I guess that is where you do your best thinking in Los Angeles. I started thinking about my own childhood. I grew up in a blended family. My parents divorced. My dad remarried. I have a half-brother. It occurred to me that it would be great to create a fairy tale story that the modern family can relate to. For there, I thought it would also be wonderful to have a princess character that children could closely identify with. I just had my first child at the time and I was watching him experiencing new things and how to get along in the world. I saw him emulating fantasy characters. Fantasy has always been a great way to tell stories and to impart lessons. I thought wouldn’t it be great for kids to be able to use those fantasy stories to provide life lessons to them as they grow up. With all that in mind, I thought “What if, there was an ordinary girl that lived in an enchanted village and her mother fell in love and married the king overnight, which made this young little girl a princess overnight.” She has to learn how to be royal and get to know her step-family. The idea of this blended royal family in an enchanted world is the heart of the show.

MG: What is a princess movie without great songs…tell us about that aspect?
CG: It is funny because I never intended it to be a musical. I got to a part in the script for the TV movie, when Sofia gets the power to talk with animals due to this emulate and they have a chance to give her their piece of mind. Her rabbit friend Clover wants to tell her why woodland creatures have been helping princesses all these years. I thought wouldn’t it be great if they just broke out into song. Like this was the first time that anyone has ever thought about that [laughs]. So I wrote lyrics to the song that would become “A Little Bit of Food”. We find out these furry woodland creatures are helping out princesses since that is where all the great food is. For there the response from the network was so great that they asked me to write three or four more songs. So it became a musical just like that! And I got to tell you…it is one of the best parts.

MG: How was it incorporating classic characters like Flora, Fauna and Merryweather from “Sleeping Beauty” and Cinderella?
CG: It is daunting. It is wonderful. That has been the fun of the show is embracing the Disney legacy and the Disney fairy tale storyboard world. And taking the decades of films and characters and creating our own unique kingdom while still incorporating those characters and elements into our show. To be able to put Flora, Fauna and Merryweather in the show and make them the head mistresses of Royal Prep, the school where Sofia and all the princesses all over the world go, is just great fun. They are great characters and children know them from “Sleeping Beauty”. It is just a blast to be able to have them show up and be a part of our world. When you bring in a classic Disney princess like Cinderella, who makes a cameo appearance to give some princess advise to Sofia, which is really…just an honor.

MG: Tell us about the amazing voice cast including Ariel Winter, Wayne Brady and Tim Gunn?
CG: The voice cast is not only supremely talented but they are genuinely excited to be working on this show. It is partially because they love the characters, the world and the legacy of Disney storytelling. Ariel Winter is a wonderful young actress from “Modern Family” and she breathes life into Sofia. She captured the character immediately. Wayne Brady is hilarious. He has brought a lot of humor both written and unwritten [laughs] to the character of Clover the Rabbit. Tim Gunn, who I believe has had limited if any voice over experience, has really embodied the character of Baileywick, the kings right-hand man. We also have Sara Ramirez from “Grey’s Anatomy”, who is a talent actress and singer. Overall, we just have such a wonderful cast who have come in and brought so much creativity and enthusiasm to the show. It has really elevated everything we done.

MG: This TV movie is set as the pilot to the upcoming animated series, when/what can we expect?
CG: The TV movie follows Sofia’s first two days in the castle, her debut ball and also getting along we her new step-sister Amber. Then in the series, which will launch early next year, will follow her continued adventures being a princess in this royal world. The show at its essence is about Sofia learning that being truly royal is about how you behave and the person you are inside. A lot of the episodes show Sofia learning these lessons or showing others how to learn these as well, especially her step-sister Amber. There are also a bunch of fun adventures that Sofia goes on and a lot of new fun characters we meet. So there are a lot of great things in store for her.

COPYRIGHT ©2012 Disney Junior. All photography is copyrighted material and is for editorial use only. Images are not to be archived, altered, duplicated, resold, retransmitted or used for any other purposes without written permission of Disney. Images are distributed to the press in order to publicize current programming. Any other usage must be licensed.