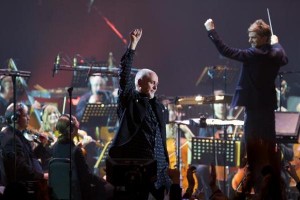 I grew up listening to Genesis before and after Peter Gabriel left the band. So I have always been a fan and this concert aims right at that fan in me and I am sure other. It was filmed at Hammersmith Apollo in March 2011. It features Peter Gabriel performing live with a 46 piece Orchestra. This concert covers versions from his “Scratch My Back” album and also touches on classic tracks from his solo career but in brand new orchestral arrangements. I think the orchestral arrangement really adds an interesting aspect his his songs. It reminds me of when Metallica went on tour with an orchestra almost makes it feel like new spin on classic music.

Of course I have to comment on the presentation of this disc. It looks really great in 3D and works well for this concert. I think they did a really great job with it. The video is really clear and the sound is extraordinary. The special feature includes on the disc is called “Blood Donors”, which is a documentary on the making of the “New Blood” concert. It is worth the watch as it shows how much really went into this event. If you are a fan of Peter Gabriel, this is a must purchase especially if you can experience this is 3D.

The concert’s set list features over twenty songs:
“Intruder”
“Wallflower”
“The Boy In The Bubble”
“Après Moi”
“The Drop”
“Washing Of The Water”
“The Book Of Love”
“Darkness”
“The Power Of The Heart”
“Biko”
“San Jacinto”
“Digging In The Dirt”
“Signal To Noise”
“Downside Up”
“Mercy Street”
“The Rhythm Of The Heat”
“Blood Of Eden”
“Red Rain”
“Solsbury Hill”
“In Your Eyes”
“Don’t Give Up”
“The Nest That Sailed The Sky”