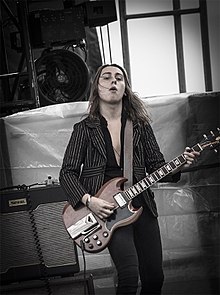 Greta Van Fleet burst onto the rock music scene in early 2017 with their debut EP titled “Black Smoke Rising”. By September the track “Highway Tune” was topping the Billboard charts. To capitalize on this momentum the band has released a second EP titled “From the Fires”. Media Mikes had the chance recently to speak with the bands guitarist Jake Kiszka about the bands new EP, their recent tour with Halestorm and the bands plans for 2018.

Adam Lawton: Can you give us some back ground on Greta Van Fleet and possibly tell us some of your influences?

Jake Kiszka: With Josh, Sam and I being brothers our influences are very similar. We were exposed to music at a very early age. I remember going on trips and listening to bands like The Allman Brothers. We had access to the same vinyl collection so I think that had a lot to do with what we are doing now. Danny also was in to a lot of the same music. Around the time I got into high school I started bringing friends over to jam and eventually Josh would start coming out and singing then a little later Sam started coming out and playing bass. A short time after all that happened Danny started coming over and was basically the last piece of the puzzle.

AL: Can you tell us about the bands new double EP “From the Fires”?

JK: We had put out “Black Smoke Rising” and we still had a bunch of songs that we had either written or recorded so to showcase some other elements of our playing we dipped into those songs. We also wanted to cover some material from a one of our influences Sam Cooke. We had those songs and some live tracks that we picked from for this release.

AL: How does your work on this release compare to that of your debut EP?

JK: The first EP was a spread of songs we had written over the course of five years. “Highway Tune” was actually the first song we had ever written followed by “Safari Song” about a year later. “Flower Power” was another song that was written about two years into the group’s existence and “Black Smoke Rising” was written right before we were set to go in to the studio and record.

AL: What type of process does the band have for song writing?

JK: We write in a lot of different ways. A lot of times one of us will bring something to the table and then we all decide if it is something we want to work on. That’s when the four of us really start to contribute to making one piece of music. We all bring things in to the writing process so it tends to vary.

AL: You guys just wrapped up a tour with Halestorm. Can you tell us about that experience?

JK: It was fantastic! Seeing people singing our songs and just rocking out was really great. I don’t think that was something any of us really expected as our sound is a bit different. The whole experience of that night after night was shocking and humbling.

AL: You guys have a string of sold out shows lined up through December. Can you tell us your thoughts on that?

JK: That’s another thing that was not expected. We really didn’t figure all those shows would sell out so quickly. It’s going to be a great thing that takes us right up until the holidays and then after that we plan to head into the studio in January to record our first full length album.

AL: What can we be expecting from that new album?

JK: The album will probably be another spread of both newer and older material that we have written at different points in time. We hope to have the album done early to mid 2018. With everything that has happened for us this past year we have gained some resources that will help us take things further with this new album. We will be looking to hit bigger venues and festivals as well as hitting some new countries also.