The Paradiso experience begins, if you choose to provide your smartphone number, before you reach the venue with some ominous video messages ‘exposing’ the Virgil corporation who you are due to meet at your appointed time. Everyone in my party also received different clues to help us but to keep secret from each other.

In midtown we met up with our contact in a functioning karaoke bar to begin our experience. Ostensibly we are being welcomed into the offices of the Virgil Corporation who are on the lookout for genetically gifted escape artists. A wonderfully spacey secretary doled out forms and waivers in Virgil’s reception before the “normal” procedures were quickly overridden and the ‘real’ escape experience begins. Cue the Saw-ready voice changer demands from the heavens. Suddenly the office was revealed to be full of puzzles and my team sprang into action.

Chapter 1 features four more spaces after that reception office, each offering their own distinct look. For my money, the best room was a vintage library where we encountered a frantic handcuffed woman who upped the tension and hastily armed my teammate with a pistol. Other thrills included an air duct for us to feel extra John McClane-y and a massive bomb to be disarmed complete with digital countdown clock. The actors, handcuff lady included, make for an extra level of intrigue as they can help or hinder your progress and to this day none of my team can decide on if we allied ourselves correctly.

Teams who have diversified their skills roster get rewarded as the in-game puzzles range from visual clues to math and physical puzzles. If you’ve ever fantasized who would be in your Oceans-type heist amongst friends, that’s the crew to bring. And going into this Halloween weekend, Paradiso provides an excellent alternate to conventional horror houses by getting your heart-racing without scaring you silly. Ultimately my escape team was done in by some algebra in the final room–who knew that would come in handy?!–but we eagerly look forward to many more chapters to come.

View the Paradiso trailer below, and find ticketing information at its official website. 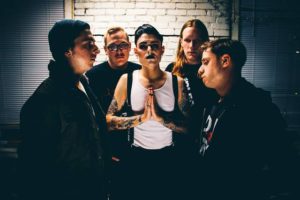 Old Wounds an up and coming hardcore band from New Jersey are out on the 2016 Vans Warped Tour promoting their newest release “The Suffering Spirit”. Being the bands first time on the tour they are eager to show fans both old and new their unique style of modern hardcore through energetic live performances. Media Mikes had the opportunity to sit down with the band and talk about their experience on the tour and what’s next for the band.

Ryan Albro: What made the band decide to do Warped Tour versus a smaller tour on your own?

Mikey: Our label came to us and offered us a spot on the tour. It’s an incredible opportunity to be given. It’s really a no-brainer. If you bust your ass for nearly 6 years doing this and it comes to a point where somebody is pretty much handing you a slot on Warped Tour, you have to say yes.

RA: Overall how do you like the tour thus far?

Mikey: It’s a lot more fun than I think any of us had anticipated. We had a strong feeling it was going to be good, but it’s been a blast. It’s a very unique time.

Matt: I’m having a great time and I love the food. A lot of us are vegan or don’t eat meat and the catering is really great helping us out with our needs and they make really great food. We made a lot of friends and it’s been a good time for sure.

RA: Who are you excited to see play each day?

Kevin: Every Time I Die and Motionless in White.

Matt: There are two bands that play on the Full Sail Stage with us that I love! two One is called Mother Feather and the other band is called Safe to Say. We’ve made great friends with Like Pacific as well. I usually hang close to our stage so I watch a lot of bands on our stage and those are some of my favorites that play every single day.

RA: Any cool stories from the shows so far?

Mikey: Not so much from this one. It seems every other tour we’ve done though a lot of funny and stupid shit happens.

Matt: One thing that sticks out from this tour is the storm we got in New Orleans. We were loading our stuff out and out of nowhere this crazy monsoon hit. A lot of our stuff got completely soaked. . A lot of our gear was drenched and we had to throw out all the cardboard boxes and stuff for our merch away. Everyone except for Kevin and me was just drenched.

Kevin: I always carry an umbrella around just because I don’t want to get tan.

Matt: That umbrella wouldn’t have done you any good anyway

Mikey: Luckily we didn’t lose anything gear wise. All of our cabs, heads, and guitars were totally fine. We got lucky.

RA: You guys are approaching the end of “The Suffering Spirit” tour cycle, what’s next for the band?

Mikey: We do have a tour about a month and a half after this ends. I can’t say what it is just yet though. We’re in the middle of writing a new album right now so that’s going to take priority. We toured a lot on this record and we really want to get the next record out.

RA: What can you tell us about the new material you’re working on?

Mikey: We have actually been playing one of the new songs in our set each day so we’ll be playing that on the remainder of Warped Tour. That’ll give everyone a taste of what’s to come.

Zak: Now that we have Matt as our second guitar player, the dynamics are definitely a little different. There are more harmonious guitar riffs. It’s definitely a combination of everything we’ve been doing. It’s heavy where it should be and there are melodies where they should be. There’s more of a metal influence for sure.

Kevin: It not going to be something where when you hear it you think “Oh that doesn’t sound like Old Wounds.”