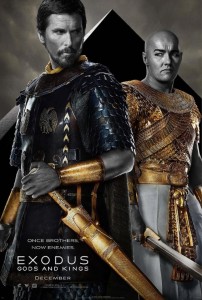 I really had no interest in seeing “Exodus: Gods and Kings” prior to seeing the trailer. They really roped me in with that trailer. It looks action packed and visual entertaining. Well, that trailer certainly had a great editor. “Exodus: Gods and Kings” is a bloated, boring, 2.5 hour mess. I wasn’t convinced by any of the performances at all. I was really hoping for an epic action film but this was very slow paced and when the action came it had little to no pay off.

Everyone should know the story of Moses but in case you don’t, the film follows a once respected General, Moses (Christian Bale), who comes back after being banned by the Egyptian Pharaoh Ramses (Joel Edgerton) to save free the 600,000 slaves that are his people. After warnings to Ramses, the city is taken by a sea of deadly plagues. Moses and his people set out on to escape Egypt and to carry out God’s plan.

When I see a movie in the theaters, I have never fallen asleep ever. This film almost came close to ruining that streak. The visual effects were good when they were happening but I just felt like they really far and few between. There were two cool scenes and when the plagues start and the part of the sea other than that. I really was underwhelming. Same goes for the 3D in the film, that was a real shame and wasn’t used at all. I mean literally nothing. I feel bad for Bale and Edgerton because they really are great actors but this was a very poor choice for them. Save your money and catch this on cable.

Media Mikes has teamed up with 20th Century Fox to give (50) random readers (and their guest) a chance to attend the advance screening of Ridley Scott’s new epic, “Exodus: Gods and Kings” in 3-D.

The screening will be held on Thursday, December 11, 2014 at the Cinemark Theatre in Merriam, Kansas. The screening begins at 7:00 p.m.

All you have to do is go to http://www.gofobo.com/main/sweepstakes/mediaexodus and register. On Tuesday, December 9, 2014, (50) random entries will be selected and those selected will receive a pass for (2) to attend this special screening. 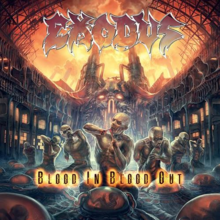 “Blood In Blood Out” is the newest release from bay area thrash legends Exodus. This is the bands 10th studio release and, the first to feature Steve “Zetro” Souza since 2004. The album is being released via Nuclear Blast records and features 11 ear splitting tracks that harkens back to the early 80’s when thrash metal reigned supreme.

Right from the start “Blood In Blood Out” commands your attention as it the track “Black 13” kicks off the album with a thunderous kick drum and eerie overdubs flanked by building guitars riffs that build in to a full on ripping symphony helmed by newly rejoined front man Steve “Zetro” Souza. As the album progresses through tracks like “Blood In Blood Out” and “Collateral Damage” it’s clearly a riff driven album that is unrelenting in its approach. A perfect example of this is the track “Salt The Wound” which features former Exodus guitarist and long time Metallica guitarist Kirk Hammett who lays down his signature styling’s along side Gary Holt and the rest of his former band mates making this track a must listen. The assault continues as you move through tracks like “Wrapped In The Arms of Rage” and “Honor Killings” both of which had me turning the volume up louder as the tracks progressed.

Even though I found some of the lyrical subject matter to be a bit over the top I still enjoyed the album as a whole. All of the musical arrangements were perfectly executed and well thought out as each track kept me on edge due to the sheer power and presentation of all 11 tracks. The overall mix of the album wasn’t too bad however I felt a little more bass guitar could have been brought in the really round out each number. Exodus fan or not the album is worth giving a listen.