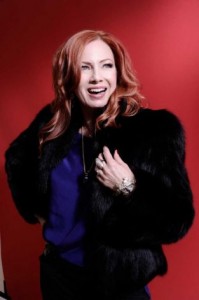 Traci Lords is an actor/singer/producer/director.  She has appeared in films like “Cry-Baby” and “Blade”, as well as the recent “Excision”.  She also released a new compilation album called “Traci Lords Presents: M2F2”. Media Mikes had a chance to chat with Traci about her new film “Excision” and also her new album.

Mike Gencarelli: How did you get involved with a film like “Excision”?
Traci Lords: It happened like “I Hope They Serve Beer in Hell Happened, “Blade” and “Cry-Baby” all happened, through my agent, Stephen LaManna. I saw the short that Ricky Bates Jr. had done years before for his final school project. I thought it was very interesting. We had several meeting and I ended up doing some screen testing for the role. I thought that I had played the role of Pauline, played by AnnaLynne McCord, before in my career. I have also played the role that Ariel Winter plays in the film as well. But I have never played a woman like Phyllis, that was as controlling and uptight. When I read it one of my concerns what how do you make somebody that is this tough in ways – how do you make her likable  – how do you give her humor? That was one of the challenges with this role. I had to figure out how to not make her one note and make her a real person.

MG: Phyllis is one great character, how did you prepare for the role?
TL: I just kept trying to put myself in the frame of mind of a parent that has one of their children dying. The closest experience I had to that, and thank God, is having two cats. The cat didn’t like ended up dying and the one I like survived. It is a terrible analogy but it is the only one I had going into the movie. What does that feel like? Trying to figure out what the other way would feel like? To be a parent and not like one of your children, probably has to be the worst feeling in the world. The torment about that is something that I just chewed on and focused on. There were wonderful actors all around me and that made it easier to come about. AnnaLynne McCord created a very unlikable strange, wonderful, bizarre character in this movie. She would come to the set as that character and it was not hard to be annoyed by her in that sense. So it helps my portrayal of Phyllis, since I just had to look in front of me.

MG:What was it in the script that jumped out of you that made you want to be apart of this project?
TL: I think the aspect that compelled me most had to be the director, Ricky Bates Jr. I think he is a really interesting person. He wrote something, whether you like it or not, it is bizarre enough to make you think. The fact that he as confident as he is as such a young filmmaker, I thought that was very intriguing. I am curious to see what he will do with more experience.

MG: John Waters is this film, you worked with him on “Cry-Baby” & “Serial Mom”, did you get a chance to reunite?
TL: That was really my doing. Ricky was a fan of John Waters and John is very dear friend of mine. I put the two of them together and John said he would do the movie, much to Ricky’s delight. John flew in for a day and we had a fun time on the set. Seeing the film for the first time at Sundance this past January, when John comes on the screen, the whole audience just lost it. You don’t expect him in that role of a priest. Ricky really cast against type in this film. It was just delightful.

MG: What do you enjoy most about working in the horror genre?
TL: I have done a lot of work in the horror genre. It is nice to return here. I liked to bounce around much with different genres like “Blade” and “Cry-Baby”. I haven’t done a real juicy dark drama in quite a while. I think I do something funny next.

MG: Last year your single “Last Drag” was hot on the charts, any plans for new music?
TL: As a matter of fact, I released “M2F2” last week on iTunes. There are ten tracks on the album, eight of which are already charting here and there. That is really great. I have three tracks on it, since it is “Traci Lords Presents”, So it is a compilation of tracks from Sea to Sun Records. It is definitely a love record, meaning that you can put it on in the beginning of a date and play it straight through no matter what happens. That was the idea behind “M2F2” aka “Music 2 Funk 2” [laughs]. I see myself doing more and more compilations like that. Really I want to continue to act and sing but also focus more on writing, producing and directing of my own stuff. I think there are so few wonderful roles for women, especially of my age. So I guess I going to have to write my own now.

MG: What else do you have plans in the cards?
TL: I am also currently adapting my book “Underneath it All”, my life story that came out in 2003 from Harper Collins into a bio pic. 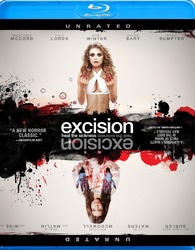 “Excision” is one of those films that doesn’t leave you after watching it.  This film isn’t a horror film per se just a very disturbing thriller filled with some really great blood and gore.  For a genre film, this also packs some really great performances. AnnaLynne McCord went through such a transformation in this film and she really committed to the role. Traci Lords was so mean, she ended up being likable (if that makes sense).  The film is short and doesn’t waste anytime getting started.  If you looking for one hell of a disturbing 80 minutes, look no further.

Official synopsis: A disturbed and delusional high school student, Pauline (AnnaLynne McCord) goes to extremes to earn the approval of her controlling mother (Traci Lords). While dealing with being an outcast teenager and obsession over curing her sister’s cystic fibrosis, Pauline becomes continually deranged as her fascination of the surgery and the human flesh grows into something abysmal and demonic.

Anchor Bay delivers the goods with this Blu-ray. This film looks beyond awesome in its 1080p transfer and its 2.39:1 original aspect ratio. The audio includes a hauntingly perfect Dolby TrueHD 5.1 track. Though the special features are not as exciting. There is an audio commentary track with director Richard Bates, Jr. and AnnaLynne McCord. The only other extras is a short behind-the-scenes featurette.