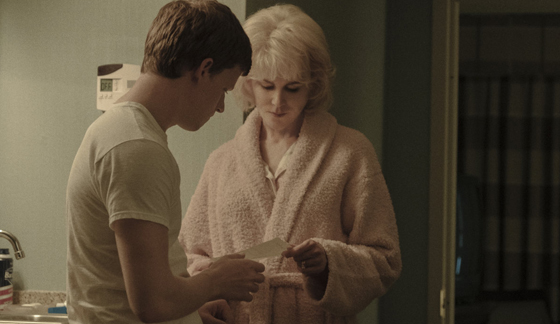 ARKANSAS.  THE LAND OF OPPORTUNITY.

So reads the license plate that is the first thing we see at the beginning of “Boy Erased.”  But opportunity for who?  It’s certainly been good to the Eamons family.  Father Marshall (Russell Crowe) is not only the town preacher, he also owns the big car dealership in town.  Wife Nancy (Kidman) is busy in the community.  And son Jared (Hedges) is a popular high school boy who dreams of being a writer.  But Jared has a secret, one that will pit him against those he loves because of those he loves.

Based on the experiences related in the book “Boy Erased” by Gerrard Conley and written by director and co-star Edgerton, the film follows Jared as he is outed to his parents and made to attend a program that will “cure” him of his supposed misdeeds.  He is taken to a campus run by Victor Sykes (Edgerton).  The rules are strict.  No cell phones allowed in classes.  They are actually confiscated each morning, with the staff informing the owners that they will be checking their contacts and calling random numbers to ensure there is no evil happening on the other end of the line.  No contact, except for the briefest of handshakes.  Heck, you have to take a counselor with you when you use the bathroom.  Most important…you do not discuss the therapy with anyone outside the campus.  Jared wants so much to please his parents but as his therapy continues he realizes that to deny his true feelings is to deny himself.

I was a huge fan of Edgerton’s previous writing/directing project, 2015’s “The Gift” and he continues to show with his work here that he is one of the most gifted filmmakers working today and one to be reckoned with for many years.  It can’t be easy pulling double duty both in front of and behind the camera, but he keeps the story moving while allowing the audience to absorb the happenings on screen.  He also pulls amazing performances out of both Hedges and Kidman, with both of them doing some of their best work in recent years.  Add to the acting kudo list Edgerton himself, as well as supporting work by Flea, Jesse LaTourette, Britton Sear, Theodore Pellerin and David Joseph Craig, whose smug face and attitude made me want to punch him every time he came on screen.

Awards season is coming and “Boy Erased” has easily put itself in the running for some end of the year gold.

Media Mikes has teamed up with their friends at Focus Features to give (50) readers and a guest the chance to be among the first to see one of the most anticipated films of the upcoming season, “Boy Erased.”

The film, written and directed by Joel Edgerton, will be screened on Wednesday, November 7 at the Alamo Drafthouse Cinema in Kansas City.  The screening will begin at 7:30 p.m.

To attend, all you have to do is click HERE.  The first (50) readers to do so will receive a pass for (2) to attend the screening.  This is a first come/first serve giveaway.  Once the (50) passes have been claimed, the giveaway has ended.  Good luck!