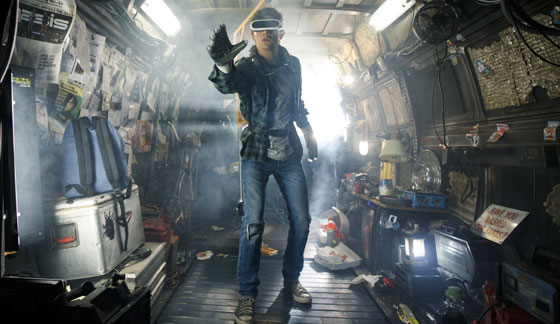 “Ready Player One” is easily my most anticipated film of the year. There was a lot riding on this film for me and a lot of anticipation. This is one of the first times that I have read the book before seeing the movie. I never read one of the “Harry Potter” or “The Lord of the Rings” books to date. Ernest Cline’s “Ready Player One” is one of the best books that I have read (not only once but multiple times). The audio book read by “Star Trek: The Next Generation” star Wil Wheaton is highly recommended. That being said, the movie is MEGA different from the book. I am honestly cool with it because I see how and why most changes were made and I am really happy with the film adaptation. In fact, I would say that is my favorite film that I have seen this year…and I say this because as of writing I have already seen the film twice, once in 2D and once in 3D with 4DX experience, which are two very different ways to experience this film. This is a film that gets better with each follow up viewing and I can’t wait to see it again!

I am just so excited and I can’t hold it in anymore, so let’s just start with how much pop culture is filled in this film. BEWARE, this paragraph ONLY has a few Easter Egg SPOILERS, but then again a few are from the trailers. There are nearly 100 Easter Eggs already that already have been found in this film. Some are super hidden and blink and you miss and some are just in your face awesome like visiting The Overlook Hotel from “The Shining” and getting to relive a few scenes with newly created CG footage. This shit was downright terrifying. “The Shining” is easily my favorite horror film of all time and this really left me saying “WOW!” A few of the brief ones that I literally almost lunged out of my chair were Battletoads, Spawn, the RV from “Spaceballs”, Jason Voorhees, the new live-action Ninja turtles, the ship from “Firefly”, Serenity and reference to “Pilotwings”. I really enjoyed the ability to watch the film and just stare in amazement as to how many amazing cameos their were. I felt the same way about “Wreck-it Ralph” when I first saw it and still to today. I am always looking for something new and I have a feeling I will be doing the same with “Ready Player One”,

Here is the film’s official premise: From filmmaker Steven Spielberg comes the action adventure “Ready Player One,” based on Ernest Cline’s bestseller of the same name, which has become a worldwide phenomenon.   In the year 2045, the real world is a harsh place.  The only time Wade Watts (Tye Sheridan) truly feels alive is when he escapes to the OASIS, an immersive virtual universe where most of humanity spends their days.  In the OASIS, you can go anywhere, do anything, be anyone—the only limits are your own imagination.  The OASIS was created by the brilliant and eccentric James Halliday (Mark Rylance), who left his immense fortune and total control of the Oasis to the winner of a three-part contest he designed to find a worthy heir.  When Wade conquers the first challenge of the reality-bending treasure hunt, he and his friends—called the High Five—are hurled into a fantastical universe of discovery and danger to save the OASIS.

Ok, so let’s talk about the different ways, I have experienced this film. First I saw it in 2D on a decent size screen. Let’s end this quick, this is NOT the way to see this movie. This needs to be experienced in IMAX or on the biggest screen possible. Second time, I saw this film it was in 4DX, which is the ultimate movie going experience with motion seats, environmental & water effects. I went with a friend who has never been to 4DX and he said that this was the perfect way to experience this film. I enjoyed the 4DX experience for “Ready Player One” but I didn’t love it. I felt like it was absolutely perfect for a few scenes like the race to the first key, which was like being in a long-ass rollercoaster ride. I enjoyed the 4DX experience for “Pacific Rim: Uprising” much more it just felt like it was always moving. With “Ready Player One” it was more every once in a while I remembered I was in a 4DX experience and I enjoyed it, don’t get me wrong. The 3D definitely added to the experience. When they dived into the Oasis, the 3D depth really kicked in and blew me away.

The cast I have to admit was an odd to me, since I am not that aware of the young stars Tye Sheridan and Olivia Cooke. I enjoyed their avatar characters and the motion capture used to achieve their performances. I also dug Ben Mendelsohn as the baddie. T.J. Miller appeared as avatar only, no real life character (probably due to harassment issues) but he was useless in the movie. Simon Pegg popped up for a minute here and there but definitely delivered the film’s heart as did Mark Rylance, who just blew it out of the park. I hated that he beat Slyvester Stallone (nominated for “Creed”) for Best Supporting Actor in 2015 for his role in “Bridge of Spies” and then even more after “The BFG” but he was simply amazing as James Halliday! Spielberg was smart for bringing he onto this film. He made me smile every time he spoke.

Let’s get on the topic of the director, Steven Spielberg. I originally thought that this film was not right for him as a director. But after seeing the film twice now, I know it was not ruined and he did a real solid job at trying to deliver the most exciting and satisfying adaption he could for the fans. He even threw in nodes to his own films like “Jurassic Park”. He really captured that nostalgic feeling for me. As we are watching the action unfold in “Ready Player One”, the score switches to cues from “Back to the Future” and you get chills up and down following by the audience screaming “Whoa!!!” That is a great feeling in a movie theater and that is how you know when you have a winner on your hands.

I know I haven’t gone into too much detail about how this is different from the book, cause honestly I really don’t care. The movie is different and I still liked it a lot. I also love the book, which is extremely detailed and dives more deep into the pop culture world. I personally learned so much from the book about tons of film, music and TV references. The film is a slimmed down working of the book. The process finding the keys and the opening of the gates are the biggest change that I recall. I know there are a few other major events that doesn’t carry through in the movie but I appreciate how they molded the world in the book into a fun and exciting popcorn flick!  Like I said, I have a feeling that I am not going to stop at two viewings of this film. It’s very likely I will be seeing this at least once more in the theaters, definitely IMAX 3D and seeking out some more Easter Eggs!