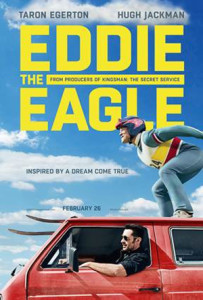 If anyone ever took the slogan “Follow Your Dreams” to heart, it was England’s Eddie Edwards. Even though he grew up with braces on his legs, the young man knew, even as a boy, that he was destined for the Olympics. Too bad nobody let destiny in on the secret.

An enjoyable film, more in the tradition of “Cool Runnings” than “Remember the Titans,” “Eddie the Eagle” follows young Eddie (Egerton) as he tries, repeatedly, to find a sport he can represent his home country of England in the Olympics. His mother (Jo Hartley) does her best to encourage him, even giving him a biscuit tin to “hold all of your medals.” Unfortunately the only thing Eddie is able to collect is a growing number of broken eye glasses. Finally, he discovers ski-walking and is soon excelling in it. However, his odd personality and life class are used to keep him off of England’s Olympic Team. Heartbroken, he stumbles upon a sport where England hasn’t competed in almost 50 years – ski-jumping. If he can handle the landings he just may have his wish granted.

Hollywood loves promoting the stories of the underdog. Ironically, the Jamaican Bobsled Team that was the basis of the film “Cool Runnings” also competed, alongside Edwards, in the 1988 Olympics. Even though the outcome of these films is already known, a good movie will hold your attention. This one does almost in spite of itself. Egerton is fine as Edwards, and he bears a strong resemblance to the awkward young athlete. Supporting Egerton is Hugh Jackman, who plays a former ski-jumper named Bronson Peary now working at the international training facility in Germany. Jackman has always had a way of lighting up a screen when he shows up and he doesn’t disappoint here. What takes you out of the story is how, with the exception of the Finnish team, nobody else apparently needs to train for the games. Eddie pretty much just walks into the facility and begins throwing himself off of 40 meter jumps – nobody stops him. Because nobody is there. Just Eddie, Bronson, the chick who owns the bar and the Finnish team.

That being said, the production values are pretty good, especially the point-of-view shots coming down the ski jumps. “Eddie the Eagle” doesn’t soar as high as it could have, but at least it doesn’t crash.

Shot over the course of three years, GOD BLESS OZZY OSBOURNE is an unrivalled look into the mind of legendary rock icon Ozzy Osbourne.  GOD BLESS OZZY OSBOURNE tells the life story of Ozzy, as seen through the eyes of his youngest child, Jack Osbourne, who worked alongside directors Mike Fleiss and Mike Piscitelli.  During the documentary, Ozzy recounts his troubled youth, his early career with Black Sabbath and the impact of fame and addictions on his first marriage. Viewers will also witness the second chapter of his life as a family man with Sharon, during which his addictions grew to a frightening level, as well as hear Ozzy and his children explain his attempts at staying clean, ultimately resulting in more than five years of sobriety. Music fans will also see live performances from around the world, including rare behind the scenes clips of Ozzy on and off stage, in his dressing rooms pre-show, to his nights in a series of hotel rooms. Throughout GOD BLESS OZZY OSBOURNE, audiences are given an inside look into the life of a rock star, from the good times to the bad.

The DVD and Blu-Ray of GOD BLESS OZZY OSBOURNE also features additional previously unseen footage not seen in the theatrical release including new interviews, classic archive footage of Black Sabbath and OZZY OSBOURNE, along with a Q&A with OZZY and Jack Osbourne and behind the scenes footage from the Tribeca Film Festival.

The New York Times (4-15-11) has described it as a movie that “unblinkingly chronicles the chaotic life and times of rock’s most notorious cut-up, from his miserable working-class childhood…to his latter-day sobriety.”