Unstoppable, Grammy-nominated hardcore juggernaut Hatebreed released their first full-length, the modern hardcore classic Satisfaction Is the Death of Desire, back in November of 1997. The album set the tone for the type of moshable metal that would eventually go on to define the ’00s.

2002’s Perseverance was a perfectly executed, packed-with-anthems follow up that has become emblematic of the era. In fact, the album’s iconic and lyrically uplifting track, “I Will Be Heard,” has become the band’s signature battle cry, securing its place as the quintessential, fist-in-the-air chant of the new millennium, thanks to a call-to-action that starts with “Now is the time for me to rise to my feet…”

In the 20 years since their definitive debut, Hatebreed have rightfully earned their status as hardcore legends. They’ve remained road warriors, touring constantly and reducing venues to pile of rubble and ash while sharing stages with everyone from Slipknot to Slayer and serving as one of the top-tier headliners on multiple festivals, from Ozzfest to Mayhem to Warped Tour.

The band will embark on a headline tour this fall, celebrating the 20 years of Satisfaction Is the Death of Desire and the 15 years of Perseverance by playing a majority of songs from both albums, along with other fan favorites from across the entire Hatebreed catalogue.

Support for the tour is confirmed and will be announced in early September. Tickets go on sale on Friday, August 25.

BEVERLY HILLS, Calif. – (Sept. 27, 2016) – Academy Award® winner Nicolas Cage (Leaving Las Vegas, National Treasure) and Russell Brand (Get Him To The Greek), embark on one hell of a holy mission in the hilarious comedy Army of One, the mostly true story of one man’s quest to single- handedly capture Osama Bin Laden. Directed by Emmy Award® winning director Larry Charles (Borat, Bruno, “Curb Your Enthusiasm,” “Seinfeld”) with screenplay by Rajiv Joseph & Scott Rothman, Army of One will arrive on Blu-ray™ Combo Pack, DVD, and On Demand November 15, 2016 from Anchor Bay Entertainment and on Digital HD November 4, 2016.

Gary Faulkner (Cage) is an ex-con, unemployed handyman, and modern day Don Quixote who receives a vision from God (Brand) telling him to capture Osama Bin Laden. Armed with only a single sword purchased from a home-shopping network, Gary travels to Pakistan to complete his mission. While on his quest, Gary encounters old friends back home in Colorado, the new friends he makes in Pakistan, the enemies he makes at the CIA – and even God and Osama themselves. Wendi McLendon-Covey, Rainn Wilson, and Paul Scheer also star in this hilarious tale of patriotism and one man’s quest for justice.

Army of One Blu-ray™ and DVD include a “Making of Army of One” bonus featurette and will be available for $29.99 SRP and $22.98 SRP, respectively.

To learn more about the film, please visit www.anchorbayentertainment.com.

ABOUT THE WEINSTEIN COMPANY AND DIMENSION FILMS

The Weinstein Company (TWC) is a multimedia production and Distribution Company launched in October 2005 by Bob and Harvey Weinstein, the brothers who founded Miramax Films in 1979. TWC also encompasses Dimension Films, the genre label founded in 1993 by Bob Weinstein. During Harvey and Bob’s tenure at Miramax and TWC, they have received 351 Oscar nominations and won 81 Academy Awards.

Army of One Blu-ray™

Army of One DVD 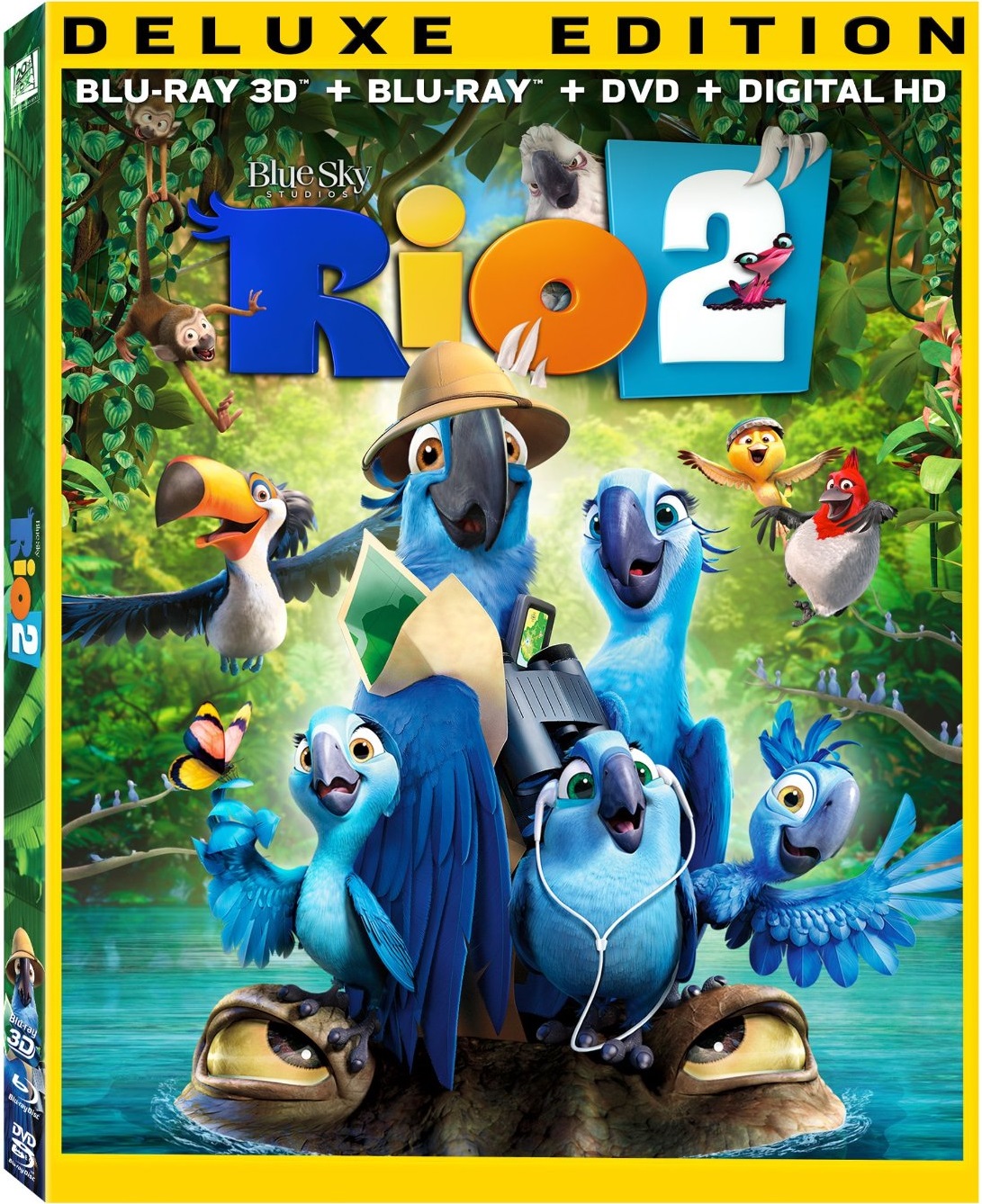 The Blu-ray™ Comes with More Than an Hour of Special Features
Including 15 Exclusive Levels of ANGRY BIRDS RIO and Two Bonus Songs!

LOS ANGELES, Calif. (June 3rd, 2014) – Get ready to shake your tail feathers! Twentieth Century Fox Home Entertainment takes you deep into the Brazilian Amazon Rainforest for the most fun you’ll have all summer, as RIO 2 debuts on 3D Blu-ray, Blu-ray and DVD July 15. Just in time for summer vacation, this “hilarious family adventure” (Jeff Craig, Sixty Second Preview) will samba its way into your home with exciting bonus features and extras everyone will enjoy. Projected to eclipse more than $490 million worldwide at the box office, the animated hit is the must-own family title of the season.

The cast of the animated hit comedy Rio returns — along with a new flock of all-star voice talent, including Bruno Mars, Kristin Chenoweth, Andy Garcia and more — in this high-flying sequel for the whole family. The party continues when Blu (Oscar® nominee Jesse Eisenberg1), Jewel (Oscar® winner Anne Hathaway2) and their three kids take a walk on the wild side and embark on a colorful, comical, music-filled journey through the Amazon. As Blu tries to fit into his new surroundings, he goes beak-to-beak with the villainous Nigel, and meets the most fearsome adversary of all: his father-in-law!

The RIO 2 Blu-ray™ and DVD brings everything you loved from the first Rio, but with even more laughs, excitement and music! Not only will kids get nearly an hour and a half of bonus features on the RIO 2 Blu-ray™, but they’ll also get their groove on with two downloadable bonus songs from the RIO 2 soundtrack: “I Will Survive” and “Poisonous Love,” both performed by Gabi (Kristin Chenoweth) and Nigel (Jemaine Clement). For even more fun, every Blu-ray™ comes with 15 exclusive levels for Angry Birds Rio™ and Music Machine Sing-Along and Dance-Along songs for a whole family party! There’s also Janelle Monáe’s “What is Love” lyric video, a deleted scene, character auditions and much more!

Shot over the course of three years, GOD BLESS OZZY OSBOURNE is an unrivalled look into the mind of legendary rock icon Ozzy Osbourne.  GOD BLESS OZZY OSBOURNE tells the life story of Ozzy, as seen through the eyes of his youngest child, Jack Osbourne, who worked alongside directors Mike Fleiss and Mike Piscitelli.  During the documentary, Ozzy recounts his troubled youth, his early career with Black Sabbath and the impact of fame and addictions on his first marriage. Viewers will also witness the second chapter of his life as a family man with Sharon, during which his addictions grew to a frightening level, as well as hear Ozzy and his children explain his attempts at staying clean, ultimately resulting in more than five years of sobriety. Music fans will also see live performances from around the world, including rare behind the scenes clips of Ozzy on and off stage, in his dressing rooms pre-show, to his nights in a series of hotel rooms. Throughout GOD BLESS OZZY OSBOURNE, audiences are given an inside look into the life of a rock star, from the good times to the bad.

The DVD and Blu-Ray of GOD BLESS OZZY OSBOURNE also features additional previously unseen footage not seen in the theatrical release including new interviews, classic archive footage of Black Sabbath and OZZY OSBOURNE, along with a Q&A with OZZY and Jack Osbourne and behind the scenes footage from the Tribeca Film Festival.

The New York Times (4-15-11) has described it as a movie that “unblinkingly chronicles the chaotic life and times of rock’s most notorious cut-up, from his miserable working-class childhood…to his latter-day sobriety.”