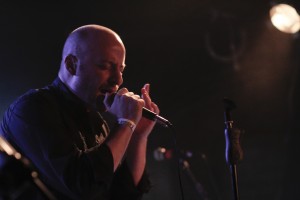 Ben Draiman is a singer-songwriter/pianist who grew up in Chicago, IL. Heavily influenced by a wide variety of music and styles, his music can best be described as strong, emotional, melodic rock, fusing the softness of the piano alongside the intensity and roughness of electric guitar. Media Mikes had the chance recently to discuss Ben’s musical background, his new album and the decision to covers Disturbed’s song “Stricken”.

Adam Lawton: Is music something you have always been interested in?
Ben Draiman: Definitely. As long as I remember, even before I learned piano at age 13 I was a little obsessed with music.  Singing in the shower, raiding my brother’s music collection, and the moment I could play what I heard on the radio I was set!  I’ve been singing and playing ever since. Music has always been a very important part of my life.  It’s where I turn to when I need to work something out, when I need to seek answers, and when I’d like some comfort.

AL: What can you tell us about your debut album, “The Past is Not Far Behind”?
BD: It’s a collection of material that was written over the course of a few years.  Much is based on particular dark periods in my life, which is usually the time I get most inspired. Much of it explores themes of an existential nature.  We are often thrown into painful situations that come all of sudden and for which there doesn’t seem to be much explanation. The more we try to figure it out, the more complicated and often worse things get. It seems at times that the only path to salvation is by accepting the here and now and moving forward as best as one can, clinging to the hope that tomorrow will be better. That is the album in a nutshell. It is some of my most personal material. Some of which I wasn’t entirely comfortable releasing until I did.

AL: Can you tell us about the decision to cover your brother David’s song “Stricken”?
BD: The idea first came about when I was discussing successful covers with my friend and producer, Raz Klinghoffer.  He had said that some of the best covers are ones that change the song 180 degrees and that if I was going to do a slow cover best to choose a fast paced song.  I honestly didn’t think it would work. “Stricken” has long been one of my favorites, something about the hooks and the lyrics that resonate well with me. In fact, from a lyrical standpoint it was exactly the sort of thing I myself would write so it was very easy to connect to.  So that very night I went to the piano and tried it. I play by ear so it didn’t take me long to come up with a basic arrangement. It became instantly clear that the lyrics and the melody lent themselves well to a ballad and I was immediately hooked. I then got together with producer Yuval Kramer and the amazingly talented pianist, Nina Vouraki, both from the Symphonic metal group Reign of the Architect and we began working on it in the studio.

AL: Can you tell us about the video for the song “Avalanche” and why you chose that song as the one to do a video for?
BD: I wrote “Avalanche” in college. I was studying at an Israeli university in a language and culture so different from what I was used to. I had felt incredibly alienated at the time and was having a hard time trying to find my place and make sense of it all.  Following a rather sudden break-up with a girl I had been dating I found myself in kind of a dark place. Around the same time I was also deeply immersed in literature with an existential bent, particularly the works of Franz Kafka. I pretty much read everything he ever wrote, among the more popular pieces was a short story he did called “The Metamorphosis” that deals with a guy who for no reason wakes up as a beetle and spends the rest of the story coming to terms with it. The existential themes he deals with in his work mainly consist of finding a way to deal with an absurd reality. Life can throw all sorts of interesting and rather challenging things your way. The more time you spend trying to figure it out, the more entangled you get in its complex web. The only path to salvation seems to be in accepting things the way they are, not questioning, and in such a way rising above it and moving forward, a task that is never easy.  This was a central focus for the song and ultimately what led to many of the elements for the video, which depicts an absurd reality as indicated by the characters wearing the masks. The only solution was to embrace the absurdity and stop trying to understand or question it. Sometimes wrong is the way things are meant to be, and knowing that and accepting it for what it is can at times be the only path towards salvation

AL: What type of tour plans do you have in place to support the release?
BD: I’m currently still performing locally here in the Middle East but I am planning US shows for February.  The first one that I can officially announce will take place at the BFE Rock Club in Houston, Texas on February 8, 2014.