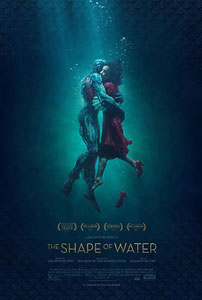 Guillermo Del Toro is known for his love of monsters, creatures, ghosts, ghouls and the macabre beauty of it all. That love takes on a new meaning in “The Shape of Water,” where Del Toro conjures up classic cinema vibes with the setting, cast, and trademark visuals throughout his latest film. After years of scaring and provoking thought, it appears that Del Toro is instead reflecting, not only on himself, but his influences.

On paper, “The Shape of Water” is a curious, if not off-putting, love story between Elisa (Hawkins), a woman made mute by an injury, and an amphibious creature, played by Doug Jones under heavy makeup. Elisa first spots the creature at her janitorial job at a secretive research center. She comes across the creature as it arrives at the base, after recently being captured in a South American river where it was worshipped as a God by local tribesmen. Curiosity gets the best of Elisa as she sneaks in to see the creature first-hand. She quickly becomes enchanted, spending her lunch breaks in the enclosure, to feed it hard boiled eggs and share her love of music with it.

The love story, as usual, has a deeper meaning that speaks volumes, but is unappealing to those who will simply see something else that’s a little too much for average audiences. It’s not necessarily a complaint of mine, but it is a scenario that’s a little rough to warm up to. It also lacks the benefit of necessary build-up and wordless romance that might not be Del Toro’s strong suit. If you can get past the strange romantic entanglement, there is a lot of beauty in Del Toro’s script.

Beyond that, there’s the evil in the world that inadvertently tries to tear the two apart. The creature’s captor, Richard (Shannon), is a dangerous control freak. He takes out his own insecurities on employees and looks to kill what he does not understand. His inflated sense of self-importance is compensation, but he’s looking to attain more power and work his way into the hierarchy of the military and other powers to be.

Because this takes place in the 60’s, there a sense that Elisa and the creature represent the counterculture to Shannon’s violent character. Very few people aid Shannon in his pursuit, while those around Elisa go against their common sense and assist in her attempts to break the creature out of confinement. It’s once the creature is out and Elisa gets to spend some alone time that I begin to feel conflicted about the attitude and direction of the film.

Del Toro’s “Beauty and the Beast” take for adults hits and misses in its third act when everything comes crashing together. There are signs of a cinematic masterpiece in “Shape of Water,” but too often Del Toro seems to cheapen the message about love for those without a voice and those who are alien in a “normal” society. It’s a tricky juggling act that would have been tough for any director, but Del Toro does make it work with his gothic imagery and performances from his cast. “The Shape of Water” should be a stronger film under Del Toro’s direction, but it’s still an emotionally resonant film. 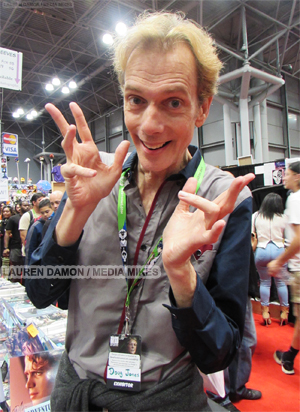 Doug Jones is one of the busiest performers in Hollywood, but he’s often hard to spot under creature makeup. In the Hellboy series he played Abe Sapien, while in Pan’s Labyrinth he played the alluring Faun and completely terrifying Pale Man (You remember the one…big bloody hands, eyeballs in the middle of them? Yeah. He’s actually a super nice guy!) Both these projects saw Jones collaborating with director Guillermo Del Toro, a successful pairing that will be returning to movie screens this Friday in the gothic horror romance, Crimson Peak. Jones will once again be deep under cover as two of Peak‘s resident haunts. The film is holding its NYC premiere today and I caught up with Doug this past weekend at New York Comic Con to discuss his ongoing collaboration with Del Toro and, seeing as it’s the Halloween season, the enduring appeal of the Disney classic Hocus Pocus in which Jones was the benevolent zombie, Billy Butcherson.

Lauren Damon: How many films have you done with Guillermo Del Toro?

Doug Jones: This is my fifth feature film with Guillermo Del Toro, Crimson Peak is, but I also am a recurring ancient vampire on his TV show, “The Strain”. Then there’s more in the works for other projects coming down next year too.

LD: What was your first project together?

DJ: Mimic. I worked a couple days doing reshoots as their long john bug creatures that took over the New York subway system. You know, as they do! [laughs] A big cockroach will do that. And then that was five years before–that was 1997–and then in 2002ish is when I got a call about Hellboy one. And that’s when our relationship was really cinched in. From working on that. And then he came back around to get me for Pan’s Labyrinth and then after that Hellboy 2, and then after that we had plans for me to be in The Hobbit when he was directing that but then he had to pull out. So I was gone too. Had plans for me in…that HP Lovecraft story, At The Mountain’s of Madness, then that ended up not happening either. So we had a couple near-misses, and then Crimson Peak came along and he threw me in there as couple of his ghost ladies. I’ll be the first ghost–I’m the mother ghost and the bathtub ghost. It’ll all make sense if you’ve seen it.

LD: Now when you see the part are called “Mother ghost” and “Bathtub ghost”, are you just like “What??”

LD: Do either of these ghost have particular quirks that you can talk about?

DJ: Well first of all playing ladies was interesting. And the other lady ghosts are played by Javier Botet–another tall skinny guy from Spain. He was the mother–or Mama ghost– in Mama. And so between he and I, Guillermo likes tall skinny guys playing women, apparently! So we’re gonna do that.

LD: Now are these characters actually on set or added in post-production?

DJ: No I was on set, filmed it on set. They probably had CG people –like the visual effects people were on set to supervise a couple of moments because, as you saw in the trailers, the ghosts are kind of see-throughish. So we’re kind of like made out of vapor yet we were filmed practically on set.

LD: Speaking of tall skinny guys in the film, how was working with Tom Hiddleston?

DJ: Taller than I expected! Yeah when I met him, I was like “Oh my gosh!” But oh yeah, delightful. Now we only brushed by each other briefly in one scene, had a near-miss. But Mia Wasikowska was my main focus. Both my characters interacted with her almost exclusively. But someone asked me recently–because Tom Hiddleston has quite a following as you know…so you might appreciate this question–Someone asked me recently in an interview ‘What does Tom Hiddleston smell like?’ Isn’t that precious? And you wanna know! Cause when I met him, I hugged him hello, he’s a very sweet guy, he’s very very accommodating and very sweet. Now mind you, when I met him I was dressed and made up in a five hour makeup job as the Bathtub ghost, my face is covered with latex foam rubber so unfortunately he smelled like latex foam rubber…because everybody did that day to me.

LD: Now, have you seen the completed film?

DJ: I have not yet. I am gonna see it when you do. I was going to be coming back here to New York for the premiere [today] but…I’m filming Quiji part 2 out in LA so I have to be back for filming. So I’m like, ‘ahh! curses!’ Yeah.

LD: Now moving on, last month I was in Walt Disney World where their Halloween party is Hocus Pocus themed…

DJ: Isn’t that wonderful? I know, I saw a clip of that! Yes!

LD: Why do you think that film has caught on and has such life now?

DJ: I don’t know the whys, I’m just very happy that it does. That it has any life. I think…it’s family-friendly, that always sells, it’s Disney, that always sells, it’s Bette Midler, she always sells, right? And it’s—the witches are not glorified, it’s a good winning over evil story told with lots of humor, lots of visuals and it’s timeless. The styling of the film even, it still holds up today…so it can go on and on. I think it’s only grown in popularity over the years instead of fading like most movies do. So I’m very tickled pink about the home video market. I’m tickled pink about the ABC Family Channel running it multiple times every October and its become like the Wizard of Oz. It’s a sit down event film that the family gathers for so now our original fans are all grown up and have kids of their own. so the audience is only getting broader and broader every year. So I’m very happy. I did not expect that.

Crimson Peak opens this Friday, October 16th. You can read my review here.
Thanks to Doug for taking the time at NYCC to speak with me!