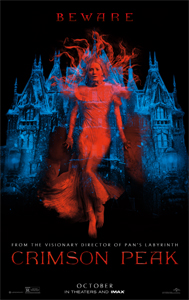 If you’re looking for a getaway this Halloween season, you can probably do no better than the red oozing walls of Allerdale Hall. This ominous edifice nicknamed “Crimson Peak” for the bloody looking clay that stains the snowy terrain outside the mansion is the home of Guillermo Del Toro’s latest haunting tale. More beautiful than terrifying, Crimson Peak is a sumptuous Gothic romance that throws viewers neck deep into a storybook world from the unique director behind Pan’s Labyrinth. It takes a lot of time immersing us into his heroine’s world but our eyes are dazzled even as we wait for any real chills to kick in. Del Toro’s vision is suitably matched by his small cast of characters lead by a positively ferocious Jessica Chastain.

In 1901 Buffalo, New York, the young Edith Cushing (Wasikowska) is struggling with a misogynistic publisher to get her ghost story manuscript to print. He believes the lady needs a love story while she’s striving to be the next Mary Shelley. Edith herself is no stranger to real ghosts as her own cholera-stricken dead mother reappeared to her as a child. Into her bookish world sweeps the tall, dark and angsty Sir Thomas Sharpe from England (Hiddleston) seeking an investment from Edith’s father (Beaver). Apparently the ore deposits in the red clay of Crimson Peak are worth money if Thomas could just get investors to help him complete the machinery he needs to mine the place. Publicly humiliated by Edith’s father, Thomas turns his attentions on Edith herself, sweeping her off her feet with a waltz in front of all society and especially rankling her would-be suitor Allan (Hunnam). Conveniently Thomas’s are the only nearby arms Edith can run into when Edith’s father is mysteriously murdered soon after and it’s off to become Lady Sharpe she goes!

In England, Edith quickly realizes her father’s reservations regarding the Sharpes–Thomas shares his mansion only with severe sister Lucille (Chastain, back to her in a bit)–were not unfounded. Thomas is as terribly off as Mr.Cushing said, with a sinking house that would be optimistically listed as “a well ventilated fixer upper.” It’s got “character” in spades! Did I mention the walls bleed? Still Edith soldiers on because, well did I also mention tall, dark and angsty? Hiddleston wears that (and an array of Victorian era finery) well. Like, maybe-a-couple-ghosts-in-the-bathtub-isn’t-a-deal-breaker, well. The real delights in the move to Crimson Peak however are a tie 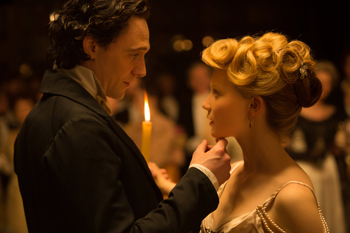 between the cavernous home, with its creaky accompanying sound design and Lucille Sharpe.

As Lucille, in her restrictive gowns and with her deader than deadpan voice tone, Chastain sinks her teeth into the considerable scenery. Her grim presence looms over her brother and his bride in that fun Mrs. Danvers kind of way. Most of the best scenes are the ones with her and Thomas holding tense discussions in the shadows. Their formidable history simmers just below the surface and as in the best Gothic stories, reflects the decaying environment around them. She desperately clings to their status quo while he, with Edith now in the picture, seems to glimpse a change in the winds, but is it too late?

And that’s Crimson Peak’s best achievement really, the oppressive atmosphere that the very walls inflict on everyone. And fortunately for us, young Edith is so apt to explore. Her endless curiosity to seek out all the nooks and crannies of the home to learn their secrets go against all reasonable horror movie rules. She shouldn’t follow that noise, talk to the ghosts or poke that red goo with a stick and yet I too wanted to know everything about the place. The production design and costumes from Thomas E. Sanders and Kate Hawley, respectively, are simply to die for and go a long way in filling in the gaps that the story leaves out. For better or worse, I suspect the house itself warrants repeat viewings of Peak. As for the true horror moments, Del Toro certainly does not shy away from ghouls or gore, but set in Allerdale Hall, they’re more the norm than cause for shock. This is a classic Gothic romance being wholly embraced by everyone on screen.

Crimson Peak is now open and you can check out interview with Doug Jones, the actor behind many of Peak’s ghosts here.