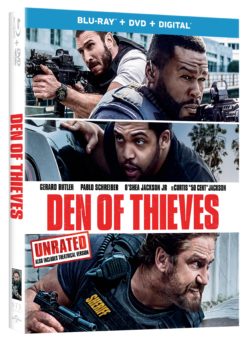 To celebrate the Blu-ray Comb Pack of “Den of Thieves”, Media Mikes would like to giveaway a combo pack to one of our fans! If you want to win this great prize, please leave a comment below your favorite movie with Gerald Butler. This giveaway will remain open until April 24th at Noon, Eastern Time. This is open to our readers in US only. One entry per person, per household. All other entries will be considered invalid. Media Mikes will randomly select winners. Winners will be alerted via email.

Den of Thieves is a gritty Los Angeles crime saga which follows the intersecting and often personally connected lives of an elite unit of the LA County Sheriff’s Department and the state’s most successful bank robbery crew as they plan a seemingly impossible heist on the Federal Reserve Bank of Downtown Los Angeles. Filled with gripping, explosive action and an ending that left audiences stunned, Den of Thieves is an electrifying game of cat-and-mouse.

In addition to both the action-packed theatrical version and the extended unrated version with footage not seen in theaters, Den of Thieves on Blu-ray™, DVD, and Digital also features never-before seen bonus content including an alternate ending, outtakes and deleted scenes, and insightful commentary from the filmmakers.