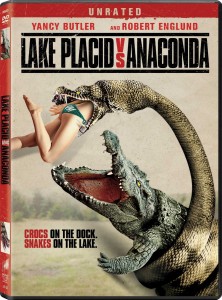 When it comes to giant monsters fighting other giant monsters, I definitely have to admit this is a weak match-up to me. I love all these cheesy dumb Syfy Originals like the Mega Shark and Sharknado franchises. The Lake Placid series was supposed to end with “The Final Chapter” back in 2012, but if you are a horror fan you know that it is never the true end as long as there is a demand. This is now the fifth film in both the “Lake Placid” and “Anaconda” franchises. They are definitely cheesy and nothing special, but all in all they are fun. And who doesn’t want to see these two franchises face off?!

Official Premise: Anacondas large enough to crush an SUV. Crocodiles strong enough to leap onto speedboats. When they’re not hunting for human prey, they’re more than willing to take on each other. Get ready for a non-stop bloodbath unlike anything you’ve seen before in this heart-pounding battle between mutated crocodiles and genetically engineered anacondas. Packed with hot sorority girls, big guns, and jaws massive enough to swallow a human in one bite, this is one screaming good time!

The film was made-for-TV and aired on Syfy earlier this year. It brings back “Lake Placid: The Final Chapter” stars Robert Englund (aka Freddy Krueger) & Yancy Butler (also from Lake Placid 3), so it is cool to see these character return. Englund is always great. This DVD (no Blu-ray planned) brings an unrated version of the film which slightly differs from the TV cut. There are no special features though included on this DVD.