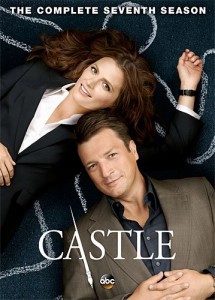 It is really rare for a show to last seven seasons and then actually still be good. “Castle” is a show that gets better with each season. The cast rounds one one of the best ensembles for a show on television. Season seven was easily the best season to date. It featured our couple Castle and Beckett finally getting married, which was a great culmination of the seven seasons. I just love how this show was developed over the years and never ceases to include non-stop laughs as well as very intense drama. This show really knows how to blend the two so well. I can’t wait to see what they have planned for season eight. Bring it on guys! No slowing down!

Official Season Premise: The wedding bells are ringing, but will Castle and Beckett really tie the knot? An astonishing turn of events tears television’s most lovable couple apart in a captivating new season of ABC’s beloved and inspired series. Experience every unforgettable moment with Castle: The Complete Seventh Season. On the biggest day of his life, Castle is nowhere to be found…and it’s not because he has cold feet. Now, in a season of brilliant twists and turns, Castle and Beckett take on New York City’s most fascinating cases while they try to solve the mystery of their own relationship. Join them as they hunt for an “Invisible Man,” travel to the Old West and witness the return of their deadly rival, Dr. Kelly Nieman.

Even though ABC has never released this series on Blu-ray, this DVD has some good special features for us hardcore “Castle” fans. There are two audio commentary tracks included. The first is on the episode, “Driven” with Director Rob Bowman, cast Jon Huertas and Seamus Dever, and Writer David Amann. The other episode is “Reckoning” with Nathan Fillion and Michael Mosley, Creator/Executive Producer/Writer Andrew W. Marlowe and Executive Producer/Director Rob Bowman. There is an uncut webmerical for “Raging Heat” included, which is great.

There is an outstanding never-before-seen DVD exclusive music video created by Ryan and Esposito for Castle and Beckett’s wedding called “Definition of Love” performed under the name of Shay-Jean The Dynamic Duo.  Ryan and Esposito are two of my favorite characters ever and this video is absolutely amazing! Next is “The Cast Behind The Cast”, which goes into the shows background and stand-ins for “Castle” and their essential role in the show introduced by the cast. Lastly, there are some bloopers and deleted scenes, which are a fantastic treat for any fan of the show. You can tell that this cast really has a blast on this show.