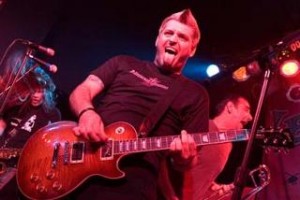 Chris Demakes is the lead vocalist/bassist for the Punk/Ska band Less Than Jake. In November of last year the band released its 8th studio album titled “See the Light”. The band is currently out on this summer’s Vans Warped Tour and  Media Mikes had the chance recently to talk with Chris about the new album, the bands 22 year career and about his recent appearance at the inaugural AP Music Awards ceremony.

Adam Lawton: The band’s latest release came out in November of 2013. With almost 20 years between the two releases what do you feel has contributed most to the bands staying power?
Chris Demakes: I think at some point we stopped believing that we could chase some kind of a trend. We were and still are a 3 piece punk band with a horn section. We worked really hard throughout the years and made a lot of friends along the way. It’s been a crazy ride over the 22 years since the band first started. Right now we are probably the oldest band out on this summer’s Warped tour. I think we are about 6 or 7 years older than the next oldest band. (Laughs)

AL: When you first started out was a career this long something you ever envisioned?
CD: No. I don’t think any band starts out thinking they are going to have a career. We were just a group of guys who got together in a garage to play some music. Next thing we know we were getting asked to play a party, then a bar and so on. Before we knew it we were 3 or 4 years in to this and getting some label attention. I wake out now with 22 years gone by and I am not sure how to totally answer this type of question. Everything sort of blended in to the next thing.

AL: By being the oldest band out on Warped tour this year how do you go about grabbing younger listener’s attention?
CD: There are certainly no delusions of granger on our part in that we aren’t going to make a 13 or 14 year old girl like our band when she isn’t interested. We just go out there and be ourselves no matter what. We have done enough festivals now to where we are comfortable getting up there in front of whoever. It’s hasn’t been too weird this time around. Warped tour is a way for us to get out there and play to people who may have never heard us before. Being involved with the promotional aspect of the tour has been great for us as well as it has really helped get our name out to the mainstream which is something that probably wouldn’t have happened at this stage in careers. We just aren’t that band anymore.

AL: When it comes times to work on a new record how do you go about keeping the music fresh and do you ever feel confined to writing with your specific genre?
CD: We write ultimately for ourselves and then for our core fan base. If you make the same record over and over people say you’re washed up and you haven’t changed. Then on the other hand if you add a keyboard or tambourine part on something you and asshole and a sellout. You really are damned if you do and damned if you don’t the longer you are a band. You can’t really listen to the internet trolls and naysayers. You have to do what comes from your heart. We are not that complicated of a band. We feel every time we put something new out that it has a freshness to it. We try each time to push ourselves a little bit in terms of writing and musicianship but you have to stick close to who you are while making sure that you keep everything fun.

AL: What do you feel has been the bands biggest obstacle thus far?
CD: That is something that I don’t think I have ever been asked before. I think the biggest thing for us has been all remaining friends. We have the same 3 guys that we started with. Our newest member is our saxophone player and he has been in the band 15 years. You learn over the years how to navigate those relationships. You learn which guy is not a morning person or which guy you don’t want to piss off at this time. (Laughs) That’s really just the everyday obstacle of being in a band and learning to communicate with each other. It’s like a relationship accept we don’t screw each other…Yet! (Laughs)

AL: You were just recently a part of the inaugural AP Music Awards. What was that experience like?
CD: I’m not completely sure how we got involved with that but I was asked to present an award and I graciously accepted. We got to go to Cleveland and drink free drinks and act like assholes. (Laughs) I think the idea of the awards is pretty cool and we were happy to be there however at this stage in the bands career I don’t think being a part of the event is going to change a lot of things for us. We had a great time however and again were very happy to be a part of the event.

AL:  What are the bands plans after Warped tour wraps up?
CD: We have some festival shows booked here in the states and a few in Canada as well. We also will be doing a two and a half week Canadian tour run before ending up in our hometown of Gainesville, Florida for a Halloween show. That will about do it for us this year.