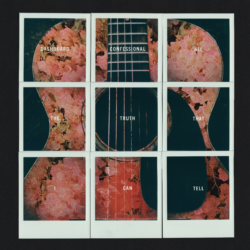 OPTIMISTIC NEW SINGLE HERALDS EAGERLY-AWAITED NINTH STUDIO ALBUM,
ALL THE TRUTH THAT I CAN TELL

EARLY-ALBUMS PRODUCER JAMES PAUL WISNER BACK IN THE FOLD

Dashboard Confessional is setting out towards a brighter tomorrow with today’s premiere of an inspiring new single. “Here’s To Moving On” is available now at all DSPs and streaming services. “Here’s To Moving On” heralds the eagerly awaited arrival of the first all-new Dashboard Confessional LP in four years, All The Truth That I Can Tell, due via Hidden Note Records/AWAL on February 25. The album is available to pre-save and pre-order now. An album trailer premieres today via YouTube.

“I think in this song I find myself understanding what brought me to the mat and what it takes to get up off the mat,” says DC founder, frontman, and songwriter Chris Carrabba. “Sometimes what brought you to the mat are outside forces and sometimes it’s you, yourself. Or it can be all those things. But it does seem the only thing that gets you up off the mat isn’t outside forces – it’s always you.”

All The Truth That I Can Tell will be available in a variety of formats including digital, CD, cassette, standard black vinyl, an exclusive limited edition “Burning Heart” transparent red and black vinyl at the DC official store, a “Cold Night” transparent blue/green vinyl exclusively at participating indie retail, a baby pink vinyl with limited edition “Burning Heart” Flexi disc exclusively at Walmart, a limited edition “Sunshine State” opaque gold nugget vinyl exclusively at Urban Outfitters, and Bandbox will be releasing an exclusive variant of All The Truth That I Can Tell on “Starting to Storm” cloudy dark green vinyl, which is accompanied by the record club’s signature artist fanzine, featuring an interview with Chris Carrabba, his track-by-track guide to the new album, rare photos and much more.

PRE-SAVE/PRE-ORDER ALL THE TRUTH THAT I CAN TELL

Written and recorded pre-Covid, Dashboard Confessional’s ninth studio album, All The Truth That I Can Tell is both a remarkable renewal and fortunate step forward for Chris Carrabba. Having ascended great heights over the past 20 years, Carrabba found himself at a distinct crossroads as the last decade came to an end. Running on fumes, unsure if he’d ever release another album, he waited. The songs eventually came, and though the project might’ve easily come to a screeching halt following a near-fatal motorcycle accident in June of 2020, All The Truth That I Can Tell stands among Carrabba’s finest – both an achievement of vision and a vital burst of artistic clarity, a strikingly potent musical look at Dashboard Confessional through a rediscovered keyhole. For the album’s production, Carrabba tapped James Paul Wisner who produced the band’s first two studio albums, The Swiss Army Romance and The Places You Have Come to Fear the Most.

Dashboard Confessional brought their summer tour to the rolling hills of Big Flats, NY on July 21st for a night of nostalgia that had the mostly millennial crowd on its feet for a majority of the evening. Also on the bill was Oklahoma hit makers All American Rejects, The Maine and new comers The Social Animals. Though the nights unseasonably frigid temperatures had people packing on a few extra layers each of the bands on the bill did their best to keep everyone up and moving.

Opening up the night were The Social Animals who performed a handful of songs of their debut EP “Formative Years” as well as unique version of the Prince hit “When Does Cry” which earned the young band a warm Upstate NY welcome in the way of applause and cheer. The Maine would take the stage next kicking the night’s energy up a notch as vocalist worked the audience like a true professional and at one point during the set brought up a young concert goer to help sing one of the bands songs which the crowd loved. All American Rejects would follow with a hit filled set that included “Dirty Little Secret”, “Swing, Swing” and “Gives You Hell” which was interspersed with semi comedic segues courtesy of front man Tyson Ritter. Thankfully the bands performance was a touch better than Ritter’s jokes as those on hand seemed to prefer the band stick to what it knows best. Closing out the night was the Chris Carrabba fronted Dashboard Confessional a band which wasted no time at all getting their set going with the well know track “Vindicated” which paved the way for other notable tracks such as the crowd requested “Saints and Sailors”, “Ghost of a Good Thing” and “Screaming Infidelities” before the set was closed out with the always popular “Hands Down”. The band looked good and sounded better making for a solid ending to a night of good music.

With this tour package running through mid August there is still time to catch one of the remaining shows as its one half nostalgia and one half new as all the bands on the bill do a great job of playing the songs that made them who they are while infusing just enough new material to peak interest in the bands upcoming releases. If your one of the lucky “select” shows where The Social Animals are on the bill I highly recommend getting to the venue early to catch their set as you won’t be disappointed. 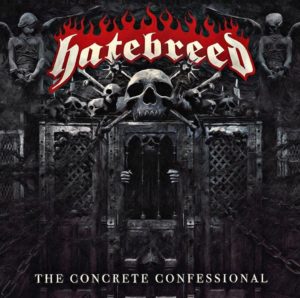 The kings of Connecticut hardcore Hatebreed are back with their first new album in three years titled “The Concrete Confessional”. The album which is being released via Nuclear Blast was produced by Chris Harris features 13 brand new tracks from the New Haven natives and serves as the follow up release to the bands 2013 album “The Divinity of Purpose”.

Hatebreed come out swinging with their latest offering “The Concrete Confessional”. Packed with crushing guitar riffs and brilliant break downs there’s very little (if anything) missing from this release. Front-man Jamey Jasta sounds as powerful as ever while the rest of the band consisting of Chris Beattie, Wayne Lozinak, Matt Byrne and, Frank Novinec provide equally impressive performances over the course of the albums 13 aggressive tracks. Songs like the albums opening track “A.D.” and “Us Against Us” hit you square between the eyes pummeling your senses while tracks like “Seven Enemies” and “Slaughtered In Their Dreams” feature a slightly slower pace yet still retain the bands ferocity and drive. From a production standpoint the album has a solid mix that does a great job showcasing the bands signature sound. Despite a lot of the songs being in lower tuning registers tones sound equally audible and lively on both headphones and larger speakers.

If you are looking for something to kick start your senses grab a copy of “The Concrete Confessional” and go to town! From start to finish the album is pure intensity as it will quickly take your adrenaline levels to the extreme. Any fan of hardcore/metal music will want to check this album out as it is truly a solid piece of musical work.