Chicago Punk’s The Lawrence Arms are set to release their 6th studio album July 17th titled “Skeleton Coast”.  The album which is being released via Epitaph records contains elements of the band’s sound which fans have come to love for nearly two decades. Although it was written and recorded before the Corona virus upended the world, “Skeleton Coast” sounds eerily prescient as it imagines an apocalyptic future where coyotes croon and wolf packs roam free

Coming in at 35 minutes spread over 14 tracks the latest offering from veteran punks The Lawrence Arms provides an upbeat lift during uncertain times. Don’t let the upbeat rhythms fool you as the albums lyrical content cuts deeps leaving a lasting impression that will stick with listeners long after the closing notes ring out. Having caught these guys last year opening for Bad Religion I was anxious to hear what the group’s latest studio album had to offer. Upon first listen I was drawn to tracks like “Quiet Storm”, “Belly of the Whale” and “Last Last Words” which are all straight ahead rockers showcasing the dual vocals of guitarist Chris McCaughan and bassist Brendan Kelly. The mixture of McCaughn’s smoothness with Kelly’s gravelly more rough and tumble approach give the band a solid one, two punch while drummer Neil Hennessy delivers the knock-out blow. For listeners wanting something a little more aggressive and fitting of the worlds current climate check out tracks like “Planes Trains and Automobiles”, “Demon” and “Goblin Fox Hunt” as they will certainly kick up the angst level.

“Skeleton Coast” checks nearly all the boxes fans of melodic punk will be looking for.  As the follow up to 2014’s “Metropole” the album showcases the bands continued growth over the past six years between while still staying true to the sound which has endeared them to fans since the late 90’s. You have to commend The Lawrence Arms along with the countless other bands who are still putting out new music despite the inability to tour and support that material for the remainder of 2020. When an album is as good as “Skeleton Coast” is, I hope to hear these tracks echoing through our hometown venues sooner than later.

Chicago bred trio The Lawrence Arms will release Skeleton Coast, their first album in six years, on July 17. The band offers fans a glimpse at the record with the release of the first single from the new record, “PTA.”

Skeleton Coast was recorded 30 miles east of El Paso, TX at Sonic Ranch Studios with longtime producer Matt Allison. It was kind of like album camp in the sense that we were in this very remote setting for two weeks and really focusing on making the record. That was a very different experience for us because we’ve always made our records in Chicago which is home and all the things about home are in the way,” says vocalist and guitarist Chris McCaughan.

The album contains the elements of the band’s sound that fans have come to love for the past two decades but recontextualizes them in a way that somehow sounds perfectly aligned with this strange time in our collective history. Although it was written and recorded before the Coronavirus upended the world, the band’s seventh studio album sounds eerily prescient as it imagines an apocalyptic future where coyotes croon and wolf packs roam free. “For a band who has been around as long as us, this is about as urgent of a record as we could make,”vocalist and bassist Brendan Kelly explains. “It may be kind of dark but it’s really about searching for light in the darkness and finding it, as small as those moments may seem. That’s sort of where we’re at: Collecting the scraps of things that could make for a bearable existence in dark times.”

The Lawrence Arms have never had any agenda apart from just having fun and making good music. Since forming in Chicago in 1999—the trio of bassist/vocalist Brendan Kelly, guitarist/vocalist Chris McCaughan and drummer Neil Hennessy—have made albums that continually challenge the boundaries of their sound. In the process they’ve carved out a distinctive identity in the punk community that’s simultaneously gritty, beautiful, melodic and mutinous. 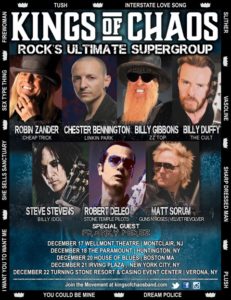 Rock n’ Roll Hall of Fame drummer, Matt Sorum, the creative force behind Kings of Chaos says. ‘ KoC always delivers a badass lineup, and this tour will not disappoint. Where can you hear some of the most iconic songs in rock history packed into one show, performed by the actual artists who created them? Every night is a celebration of rock and roll.”

Tickets are available at www.kingsofchaosband.com