Chicago bred trio The Lawrence Arms will release Skeleton Coast, their first album in six years, on July 17. The band offers fans a glimpse at the record with the release of the first single from the new record, “PTA.”

Skeleton Coast was recorded 30 miles east of El Paso, TX at Sonic Ranch Studios with longtime producer Matt Allison. It was kind of like album camp in the sense that we were in this very remote setting for two weeks and really focusing on making the record. That was a very different experience for us because we’ve always made our records in Chicago which is home and all the things about home are in the way,” says vocalist and guitarist Chris McCaughan.

The album contains the elements of the band’s sound that fans have come to love for the past two decades but recontextualizes them in a way that somehow sounds perfectly aligned with this strange time in our collective history. Although it was written and recorded before the Coronavirus upended the world, the band’s seventh studio album sounds eerily prescient as it imagines an apocalyptic future where coyotes croon and wolf packs roam free. “For a band who has been around as long as us, this is about as urgent of a record as we could make,”vocalist and bassist Brendan Kelly explains. “It may be kind of dark but it’s really about searching for light in the darkness and finding it, as small as those moments may seem. That’s sort of where we’re at: Collecting the scraps of things that could make for a bearable existence in dark times.”

The Lawrence Arms have never had any agenda apart from just having fun and making good music. Since forming in Chicago in 1999—the trio of bassist/vocalist Brendan Kelly, guitarist/vocalist Chris McCaughan and drummer Neil Hennessy—have made albums that continually challenge the boundaries of their sound. In the process they’ve carved out a distinctive identity in the punk community that’s simultaneously gritty, beautiful, melodic and mutinous. 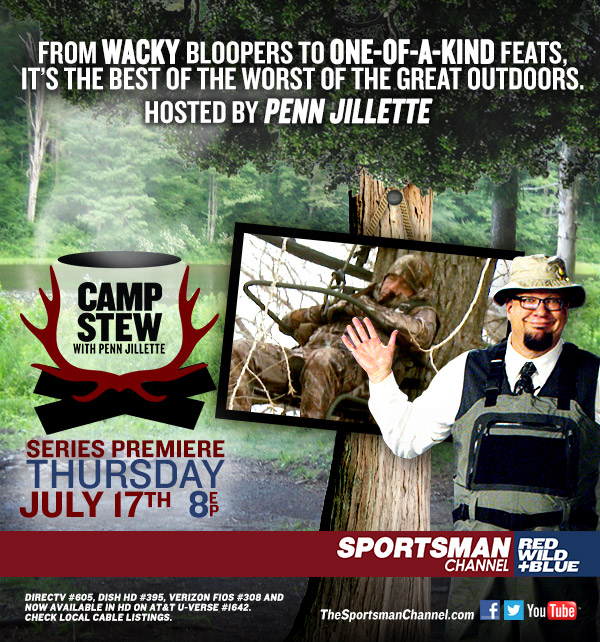 “The Best of the Worst of the Great Outdoors”

NEW BERLIN, WI (July 3, 2014) – Illusionist and magician Penn Jillette is teaming with Sportsman Channel, the leader in outdoor television for American sportsmen and women, for the launch of the network’s newest original program Camp Stew,exclusively premiering on Thursday, July 17 at 8:30 p.m. ET/PT.

Camp Stew – a reference to a favorite hunters’ dish comprised of a mishmash of ingredients including ground beef, chicken, pork, beans, corn, tomatoes and other additions – on Sportsman Channel will comprise of a variety of clips from all facets of the outdoor lifestyle. The new and exciting 10-episode program will showcase some of the craziest outdoor videos ever recorded, with Penn adding his unique brand of commentary to these incredible clips. Each 30-minute episode will feature host commentary from Penn Jillette in front of clips of some of the wildest adventures ever caught on tape.

Clips will include footage involving “Girls and Guns,” “Backyard Rambos,” “Wild Hunts and Cold Outdoors,” “Outdoor Pranks,” “Unreal Shots,” and many more scenes that will elicit a smile, offer a grimace, and even educate. Camp Stew is the third show produced in conjunction with Sportsman Channel and Pilgrim Studios. Executive Producers are Craig Piligian, Jake Shelton and Brett Boydstun.

“A series never tasted so good.  This show will entertain and engage viewers with the sometimes amazing and sometimes humorous side of the outdoor lifestyle,” said Marc Fein, executive vice president of programming and production for Sportsman Channel. “Having Penn Jillette as the host of Camp Stew is magic!”

Additionally, Sportsman Channel has engaged John Deere in a significant partnership for the duration of Camp Stew. John Deereis one of the biggest and most respected brands in the world and will provide a presence in Camp Stew throughout the third quarter.

Sportsman Channel is a part of the nation’s largest multimedia company targeting and created exclusively to serve the information and entertainment needs of outdoors enthusiasts. Sportsman Channel is dedicated to providing the most entertaining and informative hunting, shooting and fishing multimedia content while also promoting conservation and the tradition of the sportsman lifestyle.

Join the Twitter conversation @SPORTSMANchnl and let your voice be heard by using #CampStewTV.

About Pilgrim Studios: Craig Piligian’s Pilgrim Studios produces a wide variety of unscripted and scripted programming for television, including hit series Fast N’ Loud, Street Outlaws and #BikerLive for Discovery; Ghost Hunters and The Wil Wheaton Project for Syfy; The Ultimate Fighter for FOX Sports 1; Down East Dickering for History; Orange County Choppers and Swamp Pawn for CMT; Welcome to Sweetie Pie’s and Raising Whitley for OWN (Pilgrim also produced the eight-part documentary Lindsayfor the network); David Tutera: Unveiled for WEtv; Wicked Tuna and its new spin-off, Wicked Tuna: North vs. South, for National Geographic Channel; and Bring It! for Lifetime. In the scripted realm, Pilgrim’s original movies for Lifetime include Amanda Knox: Murder On Trial In Italy; Abducted: The Carlina White Story, which earned a 2012 NAACP Image Award for Outstanding Writing In A Motion Picture; and the crime thriller Stalkers.  Among Pilgrim’s current scripted projects is the pilot Recovery Road for ABC Family, starring Samantha Logan.

About Sportsman Channel: Launched in 2003, Sportsman Channel/Sportsman HD is the only television and digital media company fully devoted to honoring a lifestyle that is celebrated by millions of Americans. The leader in outdoor television, Sportsman Channel delivers entertaining and informative programming that embraces outdoor adventure, hunting and fishing, and reveals it through unique, surprising and authentic storytelling. Sportsman Channel embraces the attitude of  “Red, Wild & Blue America” – where the American Spirit and Great Outdoors are celebrated in equal measure. The network also is dedicated to promoting our nation’s military heroes and veterans, as well as providing a voice for conservation throughout the United States.Sportsman Channel reaches more than 36 million U.S. television households. Stay connected to Sportsman Channel online at www.thesportsmanchannel.com; Facebook, (facebook.com/sportsmanchannel); Twitter (twitter.com/SPORTSMANchnl and twitter.com/SportsmanPR) and YouTube (youtube.com/TheSportsmanChannel).

To find Sportsman Channel in your area click here.