THE FILM WILL FEATURE THE FIRST LIVE PERFORMANCES OF S&M ARRANGEMENTS IN 20 YEARS PLUS RENDITIONS OF SONGS WRITTEN AND RELEASED SINCE ORIGINAL SHOW.

TICKETS ON SALE FROM AUGUST 7 FROM METALLICA.FILM

Tickets will be on sale on August 7 from metallica.film.

The original S&M concerts were performed by Metallica and San Francisco Symphony and conducted by the late Michael Kamen in spring of 1999 at the Berkeley Community Theatre. 2019’s S&M² concert will feature the first live performances of these arrangements in 20 years, plus the first-ever Metallica and San Francisco Symphony renditions of songs written and released since the original concert, with new orchestral charts by Bruce Coughlin.

Legendary conductor Michael Tilson Thomas completes the first week of his final season as San Francisco Symphony Music Director with a special appearance, conducting a portion of the show.

Kymberli Frueh, SVP for Programming and Content Acquisitions at Trafalgar Releasing has said: “Trafalgar Releasing is excited to give Metallica fans around the world a chance to celebrate this anniversary concert together in local cinemas in October.

The original collaboration between two San Francisco legends—Metallica and San Francisco Symphony became a true moment in music history two decades ago. Reuniting again to perform S&M² is a salute to the legendary collaboration and creates a special moment for Metallica fans to see this iconic pairing.”

The event will be screened in cinemas around the world on October 9. More information can be found at metallica.film, where fans can sign up for event alerts including when tickets go on sale.This announcement follows a busy 2019 in music for Trafalgar Releasing with the upcoming release of Roger Waters Us + Them, Rush: Cinema Stangiato, The 9th Annual Grateful Dead Meet-Up at the Moviescoming to cinemas worldwide for the first time ever and BRING THE SOUL: THE MOVIE, the latest film from K-Pop phenomenon BTS. Recent releases have included Tribeca documentary Between Me and My Mind about Phish front man Trey Anastasio, The Cure – Anniversary 1978-2018 Live in Hyde Park London, Khalid Free Spirit and The Music Center presents Joni 75: A Birthday Celebration. 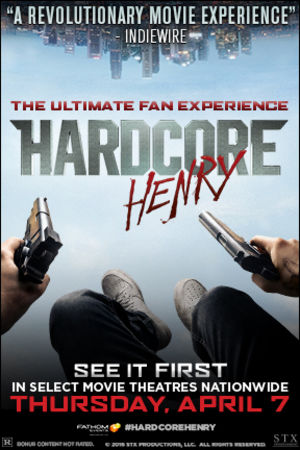 Hardcore Henry is one of the most unflinchingly original wild-rides to hit the big screen in a long time: You remember nothing. Mainly because you’ve just been brought back from the dead by your wife (Haley Bennett). She tells you that your name is Henry. Five minutes later, you are being shot at, your wife has been kidnapped and you should probably go get her back. Who’s got her? His name’s Akan (Danila Kozlovsky); he’s a powerful warlord with an army of mercenaries, and a plan for world domination. You’re also in an unfamiliar city of Moscow, and everyone wants you dead. Everyone except for a mysterious British fellow called Jimmy (Sharlto Copley). He may be on your side, but you aren’t sure. If you can survive the insanity, and solve the mystery, you might just discover your purpose and the truth behind your identity. Good luck, Henry. You’re likely going to need it…

Ticketing: Tickets are available by clicking on the orange “Buy Tickets” button. If online ticketing is not available for your location, you can purchase your tickets by visiting the box office at your local participating movie theater.

Special Fathom Features: Experience an exclusive Q&A with the director and everyone who attends the event will receive a free limited edition comic book.

Be one of the first to see the epic thrill-ride Hardcore Henry before it’s theatrical release, experience an exclusive Q&A with the director and receive a free limited edition comic book.

As an added bonus, fans have the ability to submit questions which may be answered during the Q&A. Tweet your questions using the hashtag #HardcoreFans on or before March 13.

Told in first person point of view, from the eyes of Henry himself, this wild action adventure is one of the first of its kind. Having just been resurrected from death with no memory, Henry must discover his identity and save his wife from a warlord with a plan to bio-engineer soldiers.

The film stars, and is directed by, Matt Thompson, who most recently directed the Cybill Shepherd film “Listen to Your Heart.” Also included in the cast are Kimberly Alexander (“NCIS”), Grainger Hines (“Lincoln”), Jesse Kristofferson (“Melrose Place”) and Gina Comparetto (“How I Met Your Mother”).

“Bloodline” tells the story of Brett Ethos, a young seminary student working towards a pastoral life. However, as his curiosities entice him to embrace worldly pleasures, he learns that self-discovery may be the most terrifying journey of all.

“We are excited to work with a young and successful director such as Matt,” says Osiris Entertainment CEO, Evan Crooke.

“Bloodline” will premiere at five Regal Cinemas throughout the Sacramento, California area, where the film was shot, in late September.