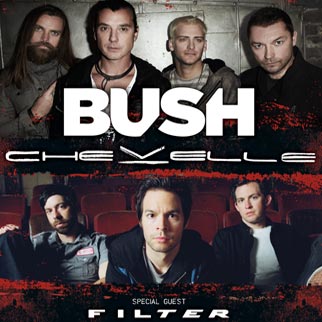 Attending this concert was like heading back in time to the mid 90’s.  I was blasted back to my teens listening to Bush and Filter in the early 90’s.  Chevelle though was more around 2002-2004, during their peak years.  Either way this concert is a great combination of hard rock.  The concert was held at one of my favorite venues House of Blues at Downtown Disney in Orlando, FL.  This venue is very intimate and very accessible.  Overall the concert was decent but not up to par as to what I was expecting.  I felt like it was missing that spark. I think I would have changed the lineup and had Chevelle open followed by Filter and then lead into Bush.

We started off with Filter lead by Richard Patrick.  He had some mega energy and was right in the middle of the crowd…I mean literally.  He was crowd surfing while singing.  It was cool finally getting a chance to see them live.  I have been a fan for many many years and still have my “Short Buss” cassette tape…that’s right kids cassette tape.  The set was only eight short songs running about 30 minutes but they really did amp up the audience and kick off the night well.  They even got all the classics in like “Hey Man Nice Shot”, which was their last song and they went off with a bang.  We even got a chance to meet up with Richard Patrick after their set.  Which is another reason why I love this venue, the bands are very accessible.

Chevelle came on stage next and definitely brought the energy.  The crowd was roaring but I felt they where sort of upstaged by Richard Patrick antics prior from Filter.  There set was loud and intense and the audience was cheering, but I wasn’t totally feeling it.  I used this opportunity to set back from the open pit to get some air and re-collect waiting for Bush.  They definitely played all the hits though and got the best responses from “Send the Pain Below” and “The Red”. Good music but band wasn’t very engaging.

When Bush came on things got a little nuts especially since people were all boozed up by that time.  They blasted out on stage and the energy was very high and they jumped right into it with “Machinehead”.  Everyone was singing along and jamming.  I had one major problem though…Gavin Rossdale was very drowned out by the guitars and backgrounds.  I enjoy loud music but his voice was getting major lost. They mixed in quite a few songs from their new album “The Sea of Memories”…and the energy cooled down.  I don’t blame them for playing them since it is the main reason why they are touring.  I actually enjoy the new album.  The concert did end on a high note as they delivered the goods with the encore covering The Beatles “Come Together” and playing their classics “Glycerine” and “Comedown”.