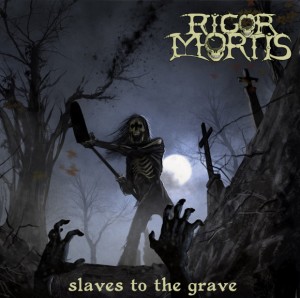 Casey Orr is the bassist for the band Warbeast. He has also been a member of such bands as GWAR, Ministry, Ex-Cops and thrash/metal legends Rigor Mortis. Media Mikes spoke with Casey recently about Rigor Mortis’ new album (their first in 23 years) titled “Slaves to the Grave”. We also spoke about the hardships which occurred during its creation and the whether or not the band plans to continue despite the death of guitarist/founding member Mike Scaccia in 2012.

Adam Lawton: Tell us about the new album and the struggles you encountered during the recording process?
Casey Orr: It’s been a pretty fucked up turn of events. We lost our guitarist Mike Saccia in December of 2012. He had actually been in the studio 3 days before he died and signed off on all of his parts for the album. He had finished everything he had to do and was happy with his work. Even still it was hard to really say that the album was done. We spent a lot of time listening to it and tweaking things and we got it to where we think it’s perfect but Mike’s not here to enjoy it with us. That really sucks because after all the years and ups and downs we were excited to hit the road and work on more new material. It’s bitter sweet. We are glad the record is coming out but it’s the end of an era.

AL: From start to finish how long did the writing/recording process take?
CO: It was relatively short. We had a couple songs we were working on for about a year before they were recorded. The majority of the record was written about 3 months prior to it being recorded. We did do some last minute arrangement stuff. We wanted that type of element to the album. We didn’t want it to be like we spent months and months on the album. That just wasn’t the vibe we were going for. We had a window of studio time become available and we just went in and did it. We did a lot of work and the crew we worked with was really great.

AL: How long after Mike’s passing did you wait to start working again on the record?
CO: We went back in after about two weeks to listen to what we had. We didn’t really do any work that first time back and from there it was kind of a slow process. It was hard to listen to Mike’s playing. There’s some real heartfelt playing on there. Mike could transition from style to style and just sound great. That was really his strong suit. We knew Mike would have wanted us to finish these tracks and that was our drive to get things done.

AL: Tell us about the decision to use IndieGogo to help with the release of the album?
CO: Rigor Mortis never had a business plan or a bank account. At the end of the night we split the money and went to the bar. Things were just so loose and punk rock. It was so wrong. (Laughs) We were going to shop the record to a label and start talking to people however a lot of the interest we had thought was going to be there just wasn’t. We weren’t asking for a lot of money or anything we just wanted to get this record out. Even before Mike died the interest was just sort of gone. We got a lot of positive feedback but because there wasn’t going to be a tour or anything behind it places didn’t want to take the risk. We said “fuck it” and we did it ourselves. We rolled the dice and went for it. We reached our goal and we were able to do things just right. Now I have to fill all the requests for paintings from the campaign as that was one of the things people could choose. I have to do 10 original paintings! It’s going to be fun.

AL: Can you tell us about the bonus DVD which will be included?
CO: There’s a short 30 minute DVD that comes with the record. There’s some behind the scenes stuff from the studio. There’s some other really cool stuff on along with a live song performance. It’s not a full length by any means but we are working on something bigger for the future.

AL: Has the band thought further about performing any of this material live?
CO: After Mike died it wasn’t even a thought. We just weren’t going to perform as Rigor Mortis again because without Mike it isn’t the same. We did a benefit as a one off thing calling ourselves “The Scotchinators”. Doyle our second singer came out as did Mikes guitar tech who really captured Mike’s style and sound. The show resulted in getting offers to do more shows. It’s fine line because we don’t want to come off as a tribute band of ourselves but we don’t want to let the music die either. My thoughts are if we are going to continue on then we start a new band and create new material to go along with the other stuff. Nothing is really long term at this point but the thought is there.

AL: Can you give us a quick update about your other projects?
CO: My band Warbeast will be performing at the House Core Festival this year. We are also slowly in the process of writing a new record. I haven’t been able to be much help as the Rigor Mortis stuff has kept me pretty busy. Shelby our guitarist who’s a brilliant writer has been working hard on that. I also will be reuniting with my punk band The Hellions for a show in December with D.R.I. We might be starting a new version of The Hellions as some of the original lineups aren’t able to continue. Guys will be moving around and we also are changing the name. Things are really busy right now.

One of the more under rated rhythm sections in Heavy Metal is that of Jizmak Da Gusha and Beefcake the Mighty also know as Brad Roberts & Casey Orr from the legendary Gore-Rock band GWAR.  Movie Mikes recently had a chance to speak with the duo in character about their recent tour of Australia and GWAR’s new album “Bloody Pit of Horror.”

Adam Lawton: How did you each join the band?
Jizmak: Well the first drummer Nippleus Erectus over dosed on a huge Red Bull type energy drink. He actually created the very first energy drink which was made entirely of liquid crack. Nippleus drank one of those and went completely crazy and eventually over dosed. They called me because I am Balzac, the Jaws of Death’s cousin. I got the gig based on the whole family principle. I have now been with the band for around 22 million years.
Beefcake: I joined the band by being fucking Bad Ass!  I also walked in with a quarter pound of weed and knew the songs. That was it. I was in. Siding with the Scum Dogs after an immense intergalactic battle didn’t hurt either! They needed muscle! I have been with the group on a few different occasions and I am Beefcake 2, 4, 6 and 8.

AL: What did you think about having to wear the costumes?
Beefcake: I thought it was pretty kick ass! The reason I started playing bass was because I loved Gene Simmons costume. I get to do the next best thing. I had been a fan before I joined so I knew what to expect.

AL: How was it touring Australia for the first time?
Jizmak: I really expected a whole lot of Kangaroo fucking and I was totally disappointed. I did however really enjoy the cuisine. They have these fried koala assholes that are excellent! (Laughs)
Beefcake: It was very expensive! We fucked a wallaby as a bonding experience.

AL: Any crazy moments from this tour?
Jizmak: There was one. We were in Ft. Lauderdale one night and after getting drunk and hanging out with the natives. We started walking along the beach and all of a sudden a dead guy washed up in the surf! So we pulled him out and started beating on him because we figured he was already dead and we shouldn’t save him. Somehow the guy lived! I thought he was dead if I had known he was alive I would have stuck him with something and killed him. The next day I wanted to do a press release stating that GWAR finds a washed up body. Man lives but GWAR feels horrible about it!
Beefcake: We wrestled a shark that turned out to be really cool so we went drinking with him afterwards. It was really cool getting to go to new places and play with a whole bunch of rock stars like NOFX and Megadeth.

AL: What is each of yours favorite track off the new album?
Jizmak: I think it’s the opening track “Bloody Pit of Horror” all four parts.
Beefcake: “Beat You to Death” of course! It’s the best song on there. I also like Tick-Tits which I wrote the music to. The whole record is great.

AL: What was it like being on the Jimmy Fallon show?
Jizmak: Jimmy Fallon was a scared little pussy! He didn’t even come out to visit us.

AL: Any plans for more TV appearances?
Jizmak: I think that’s probably our first and last national TV appearance (Laughs).  Somebody must have gotten fired for putting us on the air. It’s like us getting nominated for a Grammy. Somebody lost their job.

AL: Any plans once the tour is over?
Jizmak: I want to conquer the little people of Japan! I think they are deathly afraid of us. I can’t wait for GWAR to go there and spew bile onto their entire germ-o-phobic nation! Gor-Gor will eat them all alive.
Beefcake: I am going to record a new Hellions record. I also am going to for the first time in 20 years record some new Rigor Mortis songs and start shopping those around. I am going to try and stay real busy.