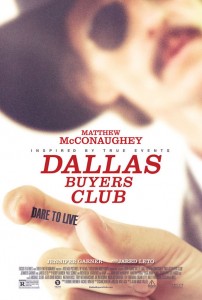 July, 1985. While taking bets on a fellow bull rider at the rodeo Ron Woodruff (McConaughey) glances at the day’s newspaper. The headline notes that actor Rock Hudson has admitted to having the AIDS virus. Muttering an unprintable comment, Woodruff goes on about his business. Sadly, he will soon learn that AIDS is also his business.

Featuring two bravura performances, “Dallas Buyers Club” is a hard hitting drama that takes a look at the world in the early days of the AIDS epidemic. An accident at work causes Ron to go to the hospital, where his blood is tested. When Ron learns that he is HIV positive he goes into denial, claiming to anyone that will listen that he’s not gay. The news goes from bad to worse when he’s told he has 30 days to live. With time running out, Ron does some quick research and learns about the experimental drug AZT. When he discovers it’s not readily available because it hasn’t been approved by the FDA he reacts angrily. “Screw the FDA,” he says, “I’m going to be DOA!” He finds a contact at a local hospital that steals the drug for him in exchange for money but soon that avenue closes. With time running out, Ron learns that the drug is readily available in Mexico and is soon purchasing it from an American physician in the country. As Ron’s life is prolonged, so is his outlook on life and those suffering around him.

In the past couple of years Matthew McConaughey has transformed himself from the smiling guy with the Texas-twang in countless romantic comedies to an actor to be reckoned with. Dropping almost 40 pounds of weight for the role, his sunken eyed character bears almost no resemblance to the smiling, handsome star many fans are familiar with. In fact, if I didn’t know McConaughey was playing Ron Woodruff I may have been hard pressed to identify him. But it’s not just the physical changes that make this performance so good. A definite homophobe, Ron soon finds himself the subject of jokes and innuendo by his former friends when his condition is learned. He soon finds himself attending a support group where he meets Rayon (Jared Leto, in the films second brilliant performance), a cross dresser who is also HIV positive. Despite his prejudices, Ron learns the new rules life is teaching him and soon he’s supplying AZT to others in his situation. The battle to continue to keep himself alive is the story documented in the film.

A powerful film with two equally powerful performances, “Dallas Buyers Club” is a well made, adult change of pace for moviegoers this holiday season.

For one week only, Monday, September 24 through Sunday, September 30, 2012, fans who purchase any Orlando 2013 show ticket will receive a free Pit Pass with every ticket purchased.

Pit Passes are normally $10 each and are good for admission to the “Party in the Pits,” which takes place 2 to 5 p.m. before the show. The pass takes fans behind the scenes to meet the drivers, obtain autographs, get a close-up view of the monster trucks, see special entertainment, take part in games, and more. A show ticket is required along with a Pit Pass for entry into the pit parties. The January 26th Orlando show starts at 7 p.m.

Tickets start at $15. The free Pit Pass offer will be available for purchase at the Amway Center Box Office, through www.Ticketmaster.com or charge by phone at 800-745-3000 (offer not available at Ticketmaster retail outlets) starting Monday, with the offer expiring at midnight Sunday, September 30th. Compete event information is available at www.MonsterJam.com.

The official title of the event is Metro PCS, 1-800-ASK-GARY, Budweiser and Your Southern Ford Dealers present the Advance Auto Parts Monster Jam®.