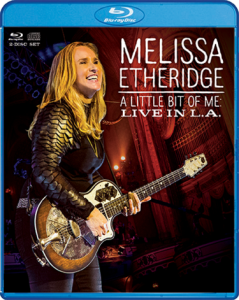 “A Little Bit of Me: Live In L.A.” is the latest live release from singer/songwriter Melissa Etheridge. The performance was recorded on December 12th 2014 at the historic Orpheum Theater in Los Angeles during the last show of Etheridge’s “This is Me” Tour. The package is being released via Shout! Factory and is available on both DVD/CD and Blu-Ray/CD combo’s and Deluxe Digital Edition formats.
2 time Grammy Award winning singer/song writer Melissa Etheridge is back with a brand new concert performance release, Her first new live release since 2001’s “Live and Alone”.

Though “A Little Bit of Me: Live In L.A.” clocks in at just 60 minutes the 13 tracks that make up the set list are pure magic. All the hits are here including “I Want To Come Over”, “Come To My Window” and “I’m The Only One” along with several new tracks from Etheridge’s most recent studio album “This Is M.E.” including “Take My Number” and “A Little Bit of Me”. Though I found the sound and picture to be really great on the Blu-Ray edition I was a little underwhelmed that the entire concert only ran 60 minutes. With Etheridge’s last live release clocking in at over 2 hrs. and packed with bonus footage there was certainly something’s left to be desired. Don’t get me wrong the behind the scenes footage and interviews with the band are ok but nothing that hasn’t already been done.

If you are a long time Melissa fan and have to have everything she release to fulfill your collection then this release is certainly for you. I think this also would make a great piece to have if you saw one of the shows from this tours run. However if you are really looking for a more complete M.E. package then dig into her expansive back catalogue as there are several options that will probably be able to fit what you are looking for.