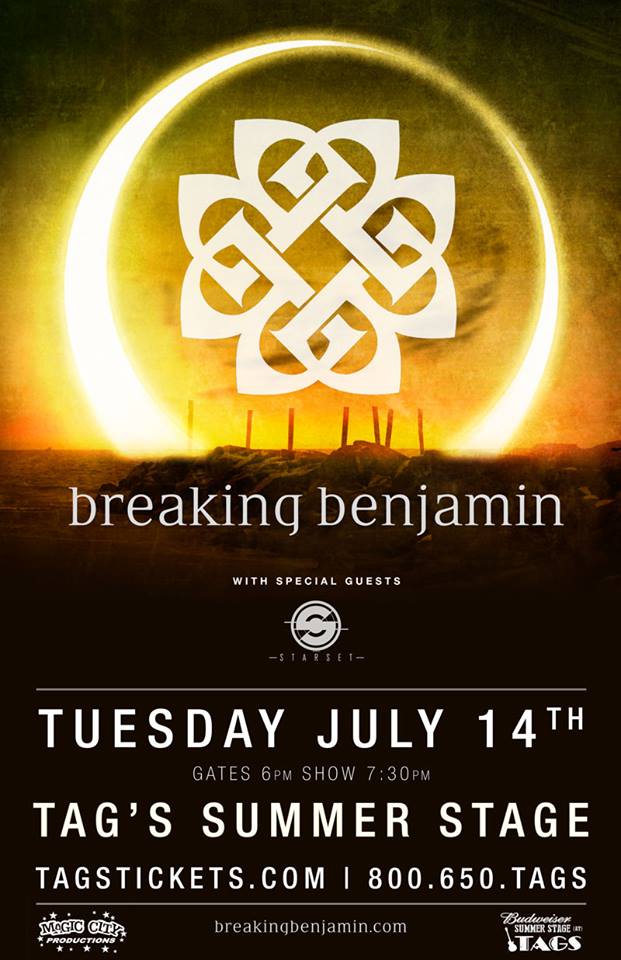 Breaking Benjamin kicked off their summer tour run in support of their most recent album “Dark Before Dawn” at Tag’s Summer Stage in Big Flats, NY on July 14th. Despite torrential down pours which prompted flash flood warnings mixed with heavy periods of thunder and lightning the show seemed to go off without a hitch.

Razor & Tie recording artist Starset would open the night hitting the stage performing their unique blend of techno infused rock. Clad in spacey lighted costume the members of the band laid a solid foundation for vocalist Dustin Bates who split his time behind the microphone and a giant touch screen control panel that seemed to be straight out of an “Iron Man” film. The group performed a variety of songs of their debut album “Transmission” including the hit single “My Demons” prior to the conclusion of the set. After a rather lengthy set change and still under foreboding skies the members of Breaking Benjamin would hit the stage to instant applause as they performed the song “So Cold”.

Throughout the bands 22 song set the band took time to show their appreciation for the crowds support throughout the numerous bouts of bad weather leading up to the bands performance. The nights set list was a combination of both new and old material with a handful of covers including Queen’s “Who Wants to Live Forever” and Tool’s “Aenima” to name just a few. The addition of the covers made me questions the bands decision as with 5 albums worth of material to choose from why not give the fans a little more of your own material as opposed to someone else’s. Either way all the hits were still there including the group’s 2002 break out hit “Polyamorous” which certainly was one of the songs garnering the night’s biggest applause.

With this being the bands first night of the tour I was a bit skeptical as you never know what to expect as things are generally still being worked out 2 to 3 shows into a tour however the band sounded great and right out of the gate seemed to be firing on all cylinders. Breaking Benjamin did not let bad weather hinder their performance and the sizeable crowd was very gracious. The tour runs through August so if you haven’t gotten tickets yet for the show closest to your area what are you waiting for? 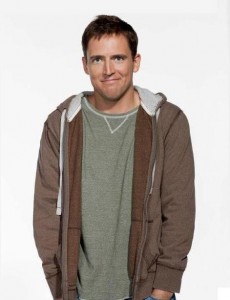 Owen Benjamin is currently co-starring in TBS’ comedy series “Sullivan & Son”.  He is co-starring along with Steve Byrne, Dan Lauria and Brian Doyle-Murray, just to name of few of this amazing cast.  Media Mikes got a chance to chat with Owen about this show and what we can expect from the first season.

Mike Gencarelli: How did you get involved with “Sullivan & Son”?
Owen Benjamin: I have been friends with Steve Byrne for awhile. We used to do shows together and make stupid internet videos. He and Vince Vaughn had been friends and Steve recommended me to tour with those guys. We did a national tour together on 2010 and we just all clicked. When they were putting the show together they wrote me in. I will be playing pretty much a version of myself and they knew they liked me and wanted to hang out with me.

MG: Did you take the role so you didn’t have to remember your characters name?

OB: Yeah we just kind of did that as a lot of comedians have done the same thing. It’s kind of weird. (Laughs)

MG: What has been a highlight for you from working on the show?
OB: Everyday doesn’t feel like work. We all got there early and went to the gym and had breakfast together. The writing staff, producers and studio are all so positive. They just want a good product. It’s really great working in an environment like that. As a comic I am a joke control freak so I thought it was going to be a little weird having someone else write for me. The writers did such a good job that I felt really relaxed and didn’t want to try and pitch any of my jokes. It was a huge weight off my shoulders which allowed me to just focus on my acting.

MG: Was Vince involved on set at all during the shows shooting?
OB: Yeah! He does this because he loves it. He just loves comedy. He got in to producing because his is doing it with his friends Peter Billingsly and Steve Byrnes. Vince gets to be a part of his friend’s careers. He would be on set pitching jokes and checking things out. It’s been an honor working with that dude.

MG: What can we expect from the first season?
OB: The thing that I really like about this show is I am a bar guy. I have been a bar guy all my life. I worked at one when I was growing up and I love drinking and partying. This show is a local bar. I think a lot of sitcoms will land flat because they are missing that authenticity of real life. As touring comics we have a really good sense of what is funny in America and not just in Silver Lake California. The characters can be over the top but there is a good base of love, family and respect that it allows the characters to do some pretty insane stuff.