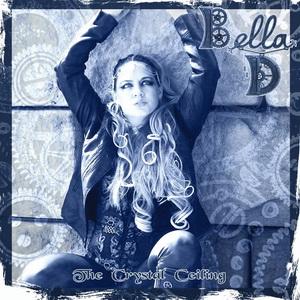 Bella D. pushes the boundaries of artistic hard rock with a unique signature blend of operatic vocals and intricate steampunk themed storytelling. This blend of interesting styles can be heard on Bella D’s new album titled “The Crystal Ceiling” which will be released on May 13th. Media Mikes had the pleasure of speaking with Bella D. recently about the albums creation, her partnership with drummer Charlie Zeleny and her plans for upcoming live performances.

Ryan Albro: How did you and Charlie Zeleny come together to work on this project?

Bella D.: Charlie went to high School together but we didn’t really know each other. We just saw each other in the hallway kind of thing. We actually met in college as we had a class together and that’s where our friendship started. I did a lot of theater at the time and I got him a lot of jobs as a theater music and stuff. He and I worked in together a lot and then we parted ways for a little while his career went 1 way and my career went another way. When I got the wild hair to finally do this album I knew I really needed a partner to help me with it. It was one of these things where the album became so big that there was no way I was going to be able to do this by myself. After talking with Charlie he asked me to do a video with him which got us back in touch with each other. I told him the idea about the album and he said he might be interested, Charlie wanted to see if we could write a song together before we invested a lot of time in the project so that’s what we did first. We sat down and wrote one song which went very quickly. From there we tried another and so on. All of a sudden things just exploded and the album literally started to take on a life of its own.

RA: Where did the idea for the dystopian, steampunk theme come from?

BD: It came from me. Charlie’s alter ego is very cyberpunk but I have always been very theatrical and I have always been in love with the Victorian age. I wound up discovering steampunk and fell in love with the idea of a very modern world, with modern objects that are all run by clockwork, steam power. There is something very romantic and badass about it at the same time. Steampunk started off as kind of very small niche and now you are starting to see it a lot more.

RA: The majority of great song lyrics generally can be traced back to writers telling very personal stories in the form of song. What was it like for you to tell not only your own incredible story, but to shape it into a hard rock, steampunk fueled album?

BD: Charlie and I worked very closely together on this album. The album is made up of a lot of my experiences which at times was very emotional for me. We all go through these moments where we feel like we’re beaten up, either by life or just by every day conflict. We are all beaten up and we are all fighting against something and the album sort of reflects that battle. It is one of these things that you have to go into full force and swing that sword, shoot the gun, whatever genre you’re fighting whether its fantasy or steampunk or modern cyberpunk. That is the general feel of it. I have gone through a couple really rough patches in life and I really drew from that. That’s where the story came from.

RA: How did you going about selecting the musicians who appeared on the album?

BD: That all comes down to Charlie. I always joke that he has got this little black book, not of women, but of every musician he has ever worked with. I think it rivals the New York City phonebook. He has had a fantastic career and is really amazing at what he does so because of that he has been able to build up some great connections with all of these artists. Charlie reached out to everyone with the idea of what we were doing and they were like that’s insane, I want in. That’s basically all that happened and the even crazier thing is that none of these artists were in the same room with each other at any time. This was all done digitally. Charlie would plug the performances into pro-tools and tweak little things here and there to make everything sound fantastic.

RA: What can you share about the comic book series that’s coming out with the album?

BD: Basically the music and the story coincide with one other. When we wrote the concept album I wrote the lyrics with a story in mind but not in such a way that you’re going to sit down a listen to a recording of a musical. This is a concept album and each song stands on its own 100% but, if somebody really wanted to sit down and listen and actually enjoy the whole concept of it they could. I really wanted to be able to tell my vision with this album. Being a huge comic book fan and knowing how popular comics are right now it made perfect sense to make this something that if people want to know what was going on story wise in the music they could follow along in the book. I worked with a really great artist who I think captured the first portion of the story quite well.

RA: What do you want listeners to take away from the album and your story?

BD: I think the biggest lesson I’d love people to take away from this is an understanding that we all have been there, we all have been that person who’s been struggling and feeling like the world is literally falling apart around them. The biggest message is that you can make it through, but you have to work at it, you have to pick yourself up, you have to have those moments of “yeah this stuff is horrible” but I’m still going, I’m still alive, I’m still breathing and today I’m going to kick its ass.

RA: What are some of the plans you have for live performances of the material?

BD: We are doing a release party at Carroll Place in New York City on May 19th. As far as live performances past that we don’t have anything locked in yet. I am working on getting into Comic Con as I would love to perform there, especially since I am releasing a comic along with the album. We also have two lyrics videos being released online soon and also a full production video of another song. That’s all in the can ready to go, it looks fantastic, we’re just waiting for the release date.