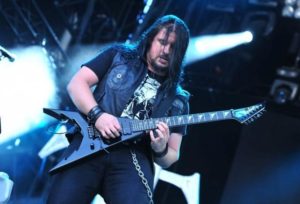 Heavy Metal band Trivium released their 7th full length studio album titled “Silence in the Snow” in October of 2015. Since that time the band has been performing at a relentless pace playing to thousands and thousands of fans all across the world. As the summer tour months get closer and closer the band is showing no signs of slowing down. Media Mikes caught up with the bands co-guitarist Cory Beaulieu recently to discuss the latest album, the bands upcoming performance at the inaugural “Rock N’ Derby” event and his thoughts on the changing tour landscape here in the United States.

Adam Lawton: Now that “Silence in the Snow” has been for a few month how do you feel the reception has been not only from a sales stand point but also from live performance reception?

Corey Beaulieu: Every record we put out there is always this quick knee jerk reaction from various places that either love it or think it sucks. A lot of time people build up these expectations in their head of what a record is going to be and if it ends up being something different than they expected there tends to be a negative reaction. There are also people who take their time with a record and really digest it and take it for what it’s worth. A lot of people have come up to us and said they weren’t sure about the album at first but after giving it some time they really like it. The album has been doing great and gotten on radio in a big way. Because of that we have been able to reach new fans that didn’t know who we were. We also have been able to change radio’s perception of who they thought Trivium was. I think there were some out there that thought we were a death metal band from Sweden and weren’t too sure about playing our albums. After meeting us and hearing the new material they have jumped on board and this new exposure here in the States has been really great.

AL: From a player/band stand point is there anything you would want to go back and change about the album?

CB: We spent a lot of time honing in the songs for this album. We knew exactly what type of record we wanted to make and what songs we needed to write. We spent a lot of time jamming and feeling the songs out. We wanted everything to feel very smooth and natural. If something didn’t feel natural we would re-write it. We didn’t stop till every key point we wanted to achieve with the record was done. I don’t think there is anything we would want to change however when you reflect back on a record you look at it and pick out things that you may or may not want to do with the next record. This record is definitely a great step for us and how we plan to do the next one.

AL: How much of the new album has made its way into your live set thus far?

CB: We have been doing a lot of headlining on this album which has allowed us to have longer set times which has been great. So far in the set we have four or five new songs that we have played. We try and balance things out between the newer and older material. Our new drummer has been learning a lot of the older stuff that we haven’t performed in years so to add in some of that stuff along with the new material has been a lot of fun. Each show we have been changing the set list so it’s a little different each night. By doing this we have been able to play a lot more material and we keep working on other songs to add in to the set on different nights and for future tours. I think it would be a lot of fun to be able to play “Breath in the Flames” and “Rise Above the Tides” which are both off the new record so hopefully for the next U.S. run of shows we will be able to debut some of these.

AL: With each album release do you find it harder to fit new material into your sets due to fans wanting to hear a lot of your back catalog?

CB: It seems like every song we rotate in and out fits pretty well. We aren’t switching a real popular one with a more obscure one or anything like that. All of the swaps are pretty equal. I think each of the sets that we play is equally strong regardless. With the internet it seems after you do your first show fans can check out the set list and know what you are playing ahead of time. It’s cool being able to swap sets because people come in not knowing what we are going to be playing that night. That brings back the excitement of not knowing what’s going to be played and makes for a cool surprise. Also with our new drummer learning more and more of our back catalog and by us adding in stuff here and there people will see that we are trying to cover all of our history and by doing that we hope more people will come out to the shows and see what we bring. Every show is different and the excitement that fans want is there each night.

AL: What are your thoughts on the recent climate shift in touring here in the States where we are seeing less multi-city traveling festivals and more single city weekend festivals similar to what have been done in Europe for quite a long time now?

CB: There is definitely more of a Euro style going on as of late. Weekend destination festivals are a model that has worked in Europe for twenty plus years. Traveling festivals like Mayhem and Ozz-fest were great in that they helped break a lot of bands but a lot of those shows took place during the week when a lot of fans were working an unable to attend. With shows shifting to a more weekend based time frame more fans are able to attend. People fly in from all over for these types of shows. Festivals like “Rock on the Range”, “Knot-Fest” and “Rock N Derby” show that this type of model is working here and are very popular.

AL: Outside of the bands appearances at various festivals this summer what other plans does the band have?

CB: “Rock N’ Derby” is actually our last show on this run of shows. After that we have a little time off then we head over to Germany to start a Euro festival run that is four weeks of shows over there. After that we are taking some time off from touring but will be working on other band related work. After that we are looking to finalize a fall headlining tour that will start in September and run through October. There is also potential for us to hit some new territories in the winter months and then wrapping up the album cycle early next year with another possible European run. You never know what else may pop up in between now and then though.