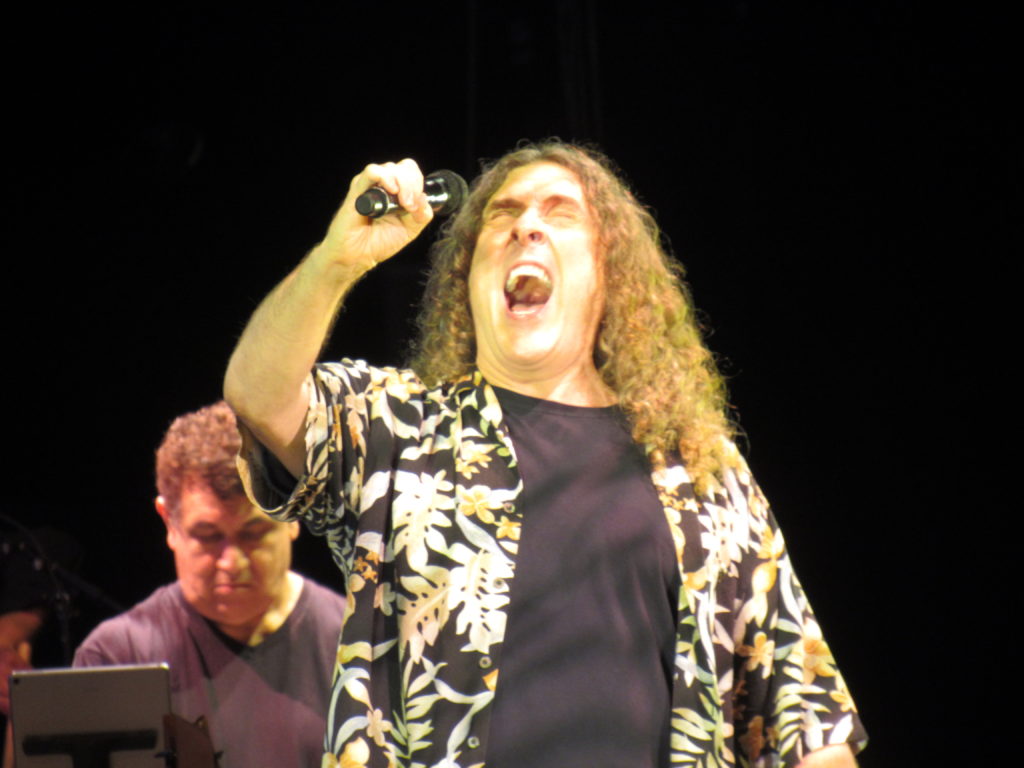 Like many other people, I have a musical bucket list. This is a list of people or groups I MUST see before I die. Over the past few years I’ve been able to cross a few of them off my list. Van Morrison? Check. Tom Petty? Check – and rest in peace. Santana? Check. But tonight I finally crossed of one that has been on my list for almost 40 years when I took in the amazing “Weird Al” Yankovic!

It was September 14, 1980. Two days before my 20th birthday. That night, while listening to Dr. Demento’s radio show, he had a guest in studio that wanted to play a song of his. The guest was “Weird Al” and the song was Another One Rides the Bus, a clever parody of Queen’s current hit Another One Bites the Dust. Something about Al – his personality oozed through my radio – instantly endeared him to me, and I listened regularly, hoping to catch one of Al’s new ditties.

On November 24, 1991 I had planned on seeing him when he came to Baltimore. He had made an appearance at a local record store – wow, I just dated myself – and very graciously signed two of my album. For some reason, if memory serves me, the show was cancelled or moved to another date. The only thing I can remember from that date is that this was the day Freddie Mercury and KISS drummer Eric Carr died. Almost three decades later, I finally fulfilled my plan.

The name of the tour – “Strings Attached” – is to inform you that not only is Al traveling with his band, but he’s bringing a 41-piece orchestra with him. Led by conductor Eric Roth, the orchestra began the night with some classic movie themes, beginning with John Williams’ “Raiders of the Lost Ark.” As I listened in rapt attention, I couldn’t help but notice one of the violinists having the time of his life playing the music. While many of the orchestra members sat still and stiff, he would move his head to the music and it was obvious that he was that rare person who really loves his job! After a few more themes, finishing with The Throne Room and End Title music from “Star Wars,” there was a 20 minute break before Al and his band joined the orchestra on stage.

Dressed in his customary loud Hawaiian shirt, the show began with a quick medley of I Lost on Jeopardy, I Love Rocky Road and Like a Surgeon. He then went into a photo-filled version of The Biggest Ball of Twine in Minnesota. As the show progressed, Al would often play along with the band and the audience. During one break, as the band played a chair was brought out for him to sit in. His brow was then mopped and a glass of wine brought to him. A touching version of You Don’t Love Me Anymore was prefaced by him thanking the Martin Guitar Company for replacing the guitar that was inadvertently broken during their last gig. When the song was over the guitar, which Al never played, was shattered in anger ala Pete Townsend.

As the night progressed, the band also got into the act, sporting everything from Viking Helmets to an impressive collection of “Star Wars” outfits. In between the audience was treated to several videos. One was a compilation of many of the television programs and films Yankovic has appeared in or been mentioned on, including “Family Guy,” “The Simpsons,” 30 Rock” and “The Naked Gun.” Their was also a faux trailer for a film called “WEIRD,” which featured Aaron Paul as “Weird Al.” He also did a nice walk through the audience and had a member of the audience electrify the show with a rousing Oboe solo!

One thing that I really noticed is that Al Yankovic, weird or not, has an amazing voice. There were a couple of times when he held prolonged notes that made me think if the funny song thing didn’t work out he’d be fronting a metal band somewhere.

The show ended in an amazing “Star Wars” style, with Al and the band dressed as everyone from Darth Vader to Obi-Wan Kenobi. Unfortunately we were only allowed to take photos during the first three songs of the evening so we can’t share the images with you. Just use your imagination.

When the show was over I headed to my car, humming Another One Rides the Bus, smiling and thinking to myself one thing. FINALLY!!

SET LIST: The Orchestra – Main titles from “Raiders of the Lost Ark,” “Mission: Impossible” and “Superman: the Movie.” The Throne Room/End Title from “Star Wars.”