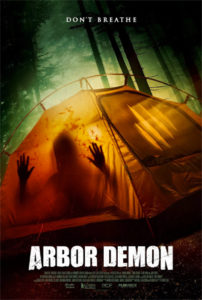 At 37-years-old, Director/Writer Patrick Rea is already making a name for himself in horror circles around the country. Since graduating from the University of Kansas in December 2002, Patrick has made dozens of short films and collaborated with other directors and writers on even more. He’s starting to get his footing as a feature-film director and took time out of his busy schedule to talk with MediaMikes about his latest film, “Arbor Demon,” which was a part of the Panic Fest lineup in January and premiered on video-on-demand on February 3rd.

Jeremy Werner: Not to steal one of the questions from one of the fine folks that attended Panic Fest, but I loved the answer you gave at it. So I have to ask, where did the inspiration for “Arbor Demon” come from?

Patricka Rea: It was a combination of things. When my wife and I were dating, we went camping one night at Lake Perry, near Lawrence, Kansas. In the early hours of the morning, there was an altercation that occurred between two other campers near our tent. After the fight ensued, one of the campers decided to hop on a rusty four-wheeler, with a deer skull on the front, and drive angrily around the campgrounds, narrowly missing our tent. My wife and I were pretty freaked out, but to cut the tension, I joked that it would be funny if something came out of the woods and attacked them, so we could get a good night’s sleep. That was where the seed of the idea came from. Once Michelle Davidson and I actually started writing the screenplay years later, my wife was pregnant, so the story really shifted to dealing with a woman’s pregnancy, along with being trapped inside a tent.

JW: What was it that Davidson brought and added to the script?

PR: Michelle is a great screenwriter and a terrific partner. Our process is really about going back and forth with ideas and solving problems within the story. She added so many layers to the script and really brought a fantastic female perspective. The movie is primarily a female driven story, and Michelle took that aspect to the next level. She also is a mother of two, and has a lot of experience to draw upon.

JW: I remember hearing that this script, including the name of the movie, has changed over time. What was it that changed and why?

PR: The original title of the film was “Enclosure”. It has played at a number of film festivals with that title and will continue to carry that name overseas. The biggest reason for the change was that distributor wanted the film to be more visible to consumers on Video On Demand. Since the film now starts with an “A”, it will be higher up on the listings.

JW: The creature in the movie, you really don’t get a good look at it until the end. But when you do, you notice all these different look quirks about them. What hand did you have in crafting the creature and what inspiration did you draw from?

PR: Davidson and I worked hard to come up with a fresh take on the monster. I enjoy drawing, so I sketched out ideas for the design. Eventually, we hired Megan Areford (“VHS: Viral,” “Cooties” and “Sharknado”) to handle make-up effects. She took my initial artwork and made some of her own sketches, which were incredible. From there she started working on the actual prosthetics for the creature and we communicated over Skype.

JW: Since the woods and nature plays a role in the movie, was there anything you manipulated in the woods you filmed in?

PR: I would say that we spent a good amount of time just trying to find unique trees and formations in the woods that would enhance the setting and story. But, in terms of actual manipulation, we built a small forest, designed by Production Designer, Leslie Keel (“May,” “Red” and “Welcome to the Jungle”) on a soundstage around the tent. This was to create the illusion that we were still in the woods when shooting all the tent interiors. This also allowed us to control the lighting and sound.

JW: What horror inspirations do you draw from when writing and directing?

PR: The early work of John Carpenter has always been a big influence on me, from the framing of the shots, to the pace and storytelling skills. I’m also inspired by directors like Wes Craven, Sam Raimi and of course Steven Spielberg. At this point in my career, I like to read about the challenges they faced while making their films. It helps me feel better when I have various roadblocks to overcome during the process.

JW: You’ve done a lot of shorts in the past and a handful of full-length movies…which one do you tend to gravitate more towards and enjoy working on?

PR: Well, I prefer doing feature films, but I love making short films. Short form filmmaking allows me to experiment with new equipment, crew and ways of telling a story. There are a lot of films that I don’t think should exist outside a smaller duration, so I tend to gravitate to those types of projects between features. I think I’ll always make short films, if nothing else to keep my storytelling skills sharp. Making a feature can take years, so it’s good to keep putting out shorter work in order stay on everyone’s radar.

JW: Obviously, this is your career. This your passion and love. What’s something outside that horror genre that you’d be interested in experimenting with and what are you working on next?

PR: I’m working on a number of things, including a CBS kids show titled “The Inspectors” which airs on Saturday mornings. Right now, Michelle and I are getting our next horror feature off the ground, that is a fresh spin on the imaginary friend story. As for experimenting, I really want to direct a high-concept sci-fi film. Just waiting for the right project to come along.

Things aren’t exactly going well for Charles (Ryan) and Dana (Dourif). They are getting ready to celebrate their anniversary, by returning to the spot where Charles proposed to Dana, and their different perceptions of life and long term goals are beginning to show. While Charles doesn’t exactly seem to know it yet, the trip is a way to patch up the relationship as it exists now and take it another step forward with Dana’s recent discovery at the doctor. She’s pregnant.

Charles isn’t the most enthusiastic about having children, seeming to ignore kids they encounter in public and jokingly saying that they’re not the kind of married couple that’ll have kids. However the risk of impregnating Dana doesn’t ever slow down his insatiable sex drive. There’s an impending sense of doom as they enter the woods, but things get eerie when they encounter a drunken group of hunters, firing wildly into the air and making a ruckus at the dead of night.

The encampment of drunks is attacked by an unseen force and soon Charles, because he’s a paramedic, makes it his duty to risk his life and take in an injured member of the group, Sean (Busey). The trio hunkers down inside the flimsy safety of an orange tent as something sinister stalks around in the woods, blending in with the surroundings. But it doesn’t attack. That’s because it may want Dana.

Lacking jump scares and jolts of fright, “Arbor Demon” seems more interested in the tension that evolves inside the tent that Dana, Charles and Sean are cowering in. When not focused on backstabbing survivalism, the movie peels back layers of its own mythology, touching upon the supernatural elements of nature and it’s deep connection to motherhood. It’s not until the end that the “demon” reveals itself and we understand why Dana is the treasured prize of the creature lurking in the woods.

Dourif, who’s probably sick and tired by now of hearing about how much she looks like her father, carries the fear of Dana of well through her eyes, breathing and physical reactions. Dana isn’t just fearful of the creature, but seemingly more fixated on if her marriage can survive the bombshell that she’s carrying Charles’ child. It plays into the third act and the movie floats away from its horror elements, finding more fun by playing with Indian mythos and supernatural components.

The story evolution helps break-up the potential monotony of your run-of-the-mill terror in the woods plotline. “Arbor Demon” isn’t going to scare you, but it does give the viewer a moment of reflection about how humanity and nature are so closely related, yet we constantly forget about it. “Arbor Demon” says a lot about gender roles when you get down to it. Dana seems to have an understanding while Charles and Sean seem to be in fight-or-flight mode.

The folks behind Panic Fest have a deep passion for horror and it showed all weekend long. Just like the past four years, the event was an absolute blast. While there’s always room for improvements, such as the amount of room there is at the Screenland Armour, it genuinely feels like the movies, the Q&A’s, the vendors, and everything else, were passionately combed over and whittled to near perfection. The efforts behind the creators and sponsors didn’t go unnoticed by those in attendance

The highlight from my first day was the sampling of local horror. Attendees were treated to movies with a local connection. I caught “Tonight She Comes” which was filmed in Missouri, just south of St. Louis, and was not for the faint of heart, squeamish, or those with a working moral compass. The other movie I caught was “Arbor Demon,” which was directed by KU alum, Patrick Rea. Despite his desire to film in his stomping grounds, he filmed his camping trip turned nightmare in South Carolina.

The second day, since I wasn’t hungover, began with an 11 a.m. selection of Saturday morning cartoons. Forever Bogus hosted the screening of late 80’s and early 90’s cartoons. As for the rest of the day, it was an eccentric collection of B-movie horror, nostalgic throwbacks, and psychological horror. The highlight of my night though was “The Last Podcast on the Left.” The trio of hosts, Ben Kissel, Marcus Parks, and Henry Zebrowski, tickled the funny bone throughout with taboo topics like Charles Manson, and absolutely bizarre topics like Batsquatch.

The final day was a rehash of some movies folks may have missed along with some new movies mixed in for flavoring. I feel like I caught the two best films of the festival that day though. Despite my well belief that the “Walking Dead” has ruined the zombie genre, “Train to Busan” and “The Girl with All the Gifts” is evidence to the contrary. And I’d be crazy not to mention “The Void.” Imagine if the creature effects people behind “The Thing” stumbled into a Clive Barker fever dream. That’s what watching “The Void” was like.

For those who attended, I bet you had a blast like I did. For those who didn’t, I hope to see you next year. You can check out the Screenland Armour here since they will be sprinkling some of the films from Panic Fest throughout the year. You can also go to the Panic Fest website here to keep an eye out for next 2018 and check out the movies I mentioned and didn’t mention.

Read Complete Article
Filed Under: Art/Theatre, Conventions Tagged With: arbor demon, girl with all the gifts, panic fest, the barn, the basement, the last podcast on the left, ...
Page 1 of 1