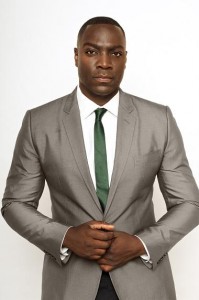 Adewale Akinnuoye-Agbaje is best known for his roles in TV series like Mr. Eko on “Lost” and Simon Adebisi on “Oz”. He has one hell of a busy year planned for 2013 with “Bullet to the Head” with Sylvester Stallone, Marvel’s “Thor: The Dark World” and a coming-of-age film “The Inevitable Defeat of Mister and Pete”. Media Mikes had a chance to chat with Adewale about how he gets into characters and his busy year.

Mike Gencarelli: How was it going head-to-head with Sylvester Stallone in “Bullet to the Head”?
Adewale Akinnuoye-Agbaje: Well as you can imagine there was a lot of testosterone, but also a lot of fun. You are working with a legend of that genre, also Walter Hill, who is a legendary director. It was a lot of fun but it was also strictly business. It was bullets to the head…get in there and deliver. Just had a great time overall man!

MG: Give us some background on your character Morel?
AAA: He is an African businessman, who is somewhat corrupt. He has escaped from Africa with huge amount of funds, moved to the United States and landed in New Orleans. He is very smart and also ruthless and his goal is to own most of New Orleans…by any means necessary. He has his stable of henchmen and is also very sophisticated. It is all camouflage for what lies below, which is a ruthless and cold-hearted businessman. He is also conflicted with a crippling disability but he does not allow that to impede him as a formidable force. In fact he uses that to propel him and try harder.

MG: Is there anything in particular you do to prepare for a role like that?
AAA: It is just a matter of having dialogue with the director. A lot of it was on the page but then we added texture and dimension. I chatted with the director and saw what he would like to explore. Also I was given the choice if I wanted to make him crippled or not. I thought it would be an interesting challenge to do so and add more texture to the character. So we went for that. I think as we started to see him on screen we started to see him unravel with different layers. I did have to hobble around on sticks for a good 2-3 weeks before we shot it though in order to get the disability right. Other than that it was really get in there and feel the character. We shot it in very opulent locations in New Orleans and that always adds to your performance.

MG: How did you prepare for such an iconic comic villains playing both Algrim the Strong and Kurse in “Thor: The Dark World”?
AAA: It was a huge opportunity to pull double duty. In order to prepare you obviously go through and read the comics and research the characters history. You also look at the imagery and have discussions with Marvel and the directors to see their vision for the characters. Then the rest is left for the designers who create the costumes, which really then assists in your performance. Specifically for Kurse, it was very much looking at the costume and what I thought it would embody. For instance it had a certain look, so I used that look for his interpretive actions. I found that very useful. So with the horns and everything, I just went with that flow and tried to define a way of moving and fighting that was in the rhythm and the way that he looked. With Algrim, again the aesthetic look and the outfit really factored in as does the location and the set. From the moment you step into that world, you immediately become that character. You make them real. So in a way you have to ground the character in reality that makes it normal for them to be in that world. I believe and hope that we have done that well in this and that the audiences are going to enjoy it.

MG: You were called “The Biggest Badass in Hollywood” (by Huff Post); what keeps you coming back and playing the villain in roles like this?
AAA: What makes me or what makes them keep hiring me? I think it is one in the same thing. I think we both enjoy it. I think the industry knows that I can deliver when playing the villain. I certainly enjoy playing the villain because you have this created likeness to really go anywhere. When you play the hero, there are parameters that you cannot cross. But with the bad guy, there is no such thing and you can do basically what you like. That is a creative freedom and luxury that I love. They also always make the most interesting character for me. The funny thing is though; I never really look at these as bad. I look at them as guys who have agendas and they will do what they need to do in acquire, obtain or accomplish them. So to make the most interesting villain is that you need to see him as an ordinary guy who have a mission.

MG: From action to superheroes we go to the coming-of-age “The Inevitable Defeat of Mister and Pete”, tell us about this project?
AAA: This is a very different type of movie. As you can see we have done all genres across the board from huge Marvel tentpole to iron-packed action. This film really comes down to what I really love, a small independent film. It premiered at Sundance and was shot by George Tillman Jr. It has got Jeffrey Wright, Jennifer Hudson, Anthony Mackie and an absolutely spectacular group of children actors. It is based on the survival of these two children in a hot and tough summer in Brooklyn. I play a cop, on the other side of the law this time, who is trying to keep these straight kids off the streets. It is just one of those endearing stories of survival and friendship. It is very real. I also love shooting in New York during the summer. This one is not about the costumes or effects or anything. It is about heart-to-heart relationships.