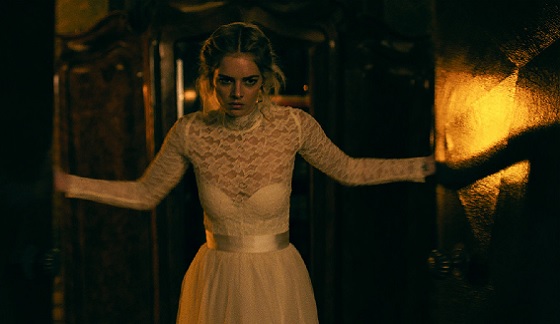 I guess a film like “The Hunt” was a little bit too on the nose. There were several disappointed horror junkies, back on August 7th, when it was announced the latest Blumhouse film would be shelved after several mass shootings in America, along with some rumored outrage by President Trump. Maybe those disappointed filmgoers, who are going this year without another “Purge” movie as well, can get a cathartic release from “Ready or Not.”

It’s Grace (Weaving) and Daniel Le Lomas’ (Brody) wedding day. The young couple is getting married at the Le Lomas’ mansion, which was built on a card and board game empire. Daniel’s family, which he begrudgingly introduces to Grace, is an eclectic bunch. Which is a nice way of saying they’re a bunch of snobby 1%’s who believe Grace is a gold digger. Whether or not they warm up to Daniel’s love seems to come down to strange family ritual, a game. Grace must draw a playing card from the film’s McGuffin, and play the game that’s printed on that card. She’s told by several other people who’ve married into the family that they simply played a game Chess or a round of Old Maid. She draws Hide and Seek.

You’ll be disappointed if you go into “Ready or Not” expecting a rich satire about politics and class, but if you’re expecting a gory good time you’ll be stuffed. The goal of Hide and Seek, for the Le Lomas’ family, is to hunt down and kill Grace. This isn’t supposed to be for sport, but to maintain an otherworldly pact, which is certainly a dig at the corrupting power of wealth. If you start thinking about some of the film’s inherent flaws, the set-up quickly falls apart and you’ll begin to wonder about things like logic. So don’t think too hard during this one.

The film isn’t short on violent deaths, blood and visually graphic tomfoolery. It’s all played for comedic effect and eye-wincing shock. Some of the more comedic moments are when one of the drugged out members of the Le Lomas family continuously manages to find accidental ways to kill mansion staff, while some of the most visually disturbing scenes include one where a character makes unfortunate use of a gaping wound in their hand. The scenes unfortunately smack audiences at a blistering pace. There’s a lot of downtime for the characters to wordlessly linger from scene-to-scene and discuss inconsequential plot points.

“Ready or Not” promises a fun cat-and-mouse game, but ends up repeating the formula of Grace being captured, but only to escape. This happens about half a dozen times, if not more, including three times in the climax. At least the movie wrings out a strong performance from Weaving, who has the makings of a scream queen. She has a cold icy stare when her character is in vengeance mode, as well as a perfect high-pitched scream during moments of physical agony and mental anguish. Everyone else is casually fine. The problem is that the actors portraying the Le Lomas clan can’t decide whether or not to be cognizant of the absurdity of it all.

“Ready or Not” sits in between the two extremes of horror content in 2019. It’s not a complete misfire like “Ma,” but it isn’t as intricately put together as “Midsommar” or “Us.” It’s a film that’ll satisfy the late night sweet tooth for people wanting to gnaw on a dark comedy and have guilty belly laughs. It’s the kind of genre mash-up that would have developed a cult following in the 80’s.