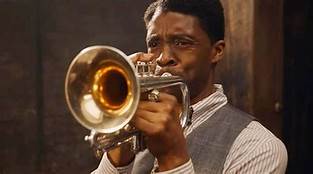 It’s a hot summer day in Chicago in the late 1920s.  In a small, enclosed room a group of musicians gather, waiting to back up a recording session for the tardy Ma Rainey (Davis), forever known as “the Mother of the Blues.”  Among the musicians is Levee (Boseman), a horn player with aspirations of musical fame of his own.  He’s tired of being part of a “jug band” and wants to introduce the musical world to a new style.  But he soon learns that Ma isn’t interested in a new style.  And what Ma says, goes.

Like “Fences” before it, “Ma Rainey’s Black Bottom” is a film adaption of an August Wilson play, again produced by Denzel Washington, who also produced, directed and starred in “Fences.”  “Ma Rainey” is directed by the amazing 15-time Tony Award nominee (and three time winner) George C. Wolfe.  Wolfe skillfully opens up the play on screen while keeping the performances front and center.  And what amazing performances they are.

Davis is tough as nails as Ma, a woman a lot smarter than some give her credit for.  She knows that her white producers only want her for her voice = that otherwise they would have nothing to do with her.  So she wields the power her voice gives her by making demands that must be met.  Whether it’s fetching her a Coke or ensuring that her nephew will appear on a record and get paid, she is as strong a Black woman as the times will allow.

The supporting cast of musicians are equally strong, especially when killing time by sharing stories of their musical past.  Turman, Michael Potts and Colman Domingo share their tales with great conviction and, occasionally, humor

As the session producer, Jeremy Shamos is both firm and bendable, depending on whether he’s dealing with his boss or Ma.

God bless Chadwick Boseman.  His star shone brightly with amazing work in films like “42,” “Get on Up” and, of course, “Black Panther.”  He left this world much too soon, but he left us with a performance that will be remembered forever.  Levee is a dreamer, but when his dreams are dismissed, or downright crushed, his jovial smiling face turns into a mask of anger, an anger that needs to be released.  Boseman, like Ms. Davis, has been Oscar nominated for his performance and they both richly deserves to win.