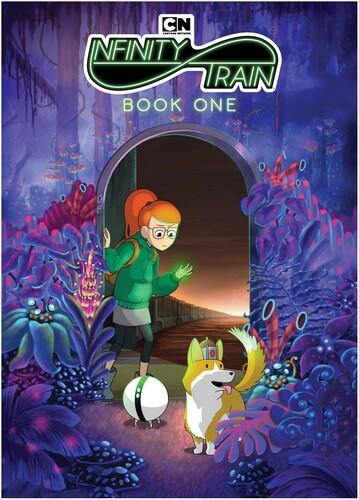 “Infinity Train” is a new show created by Owen Dennis (former writer and storyboard artist from “Regular Show”) which aired on Cartoon Network. The show was split into two books, the first book will take you on a journey will all 10 episodes from the first season. Also included with Book One is an hour of epic bonus features including commentaries, documentaries, animatics, and more! I love the animation style from this show, it is simple yet extremely complex. The colors are so vibrant. I can’t wait to see what season two will bring as each episode literally draws you in deeper and deeper into the mystery of the show.

Official Premise: Join Tulip on a mind-bending journey aboard the mysterious Infinity Train, alongside her companions Atticus, the canine king of Corginia, and One-One, a robot with dueling personalities. With puzzles and perils awaiting them in every car and the relentless Steward on their trail, will Tulip ever find a way off the train and return home?

The voice cast is also very impressive Ashley Johnson aka Chrissy Seaver in “Growing Pains” and tons of other voice over projects including “Teen Titans” and the video game “The Last of Us”. Also included is Ernie Hudson aka Winston Zeddemore in the Ghostbusters film series. Reocurring characters include Kate Mulgrew aka Captain Kathryn Janeway on Star Trek: Voyager, Lena Headey aka Cersei Lannister on Game of Thrones and Dee Bradley Baker from Phineas and Ferb, SpongeBob SquarePants and 100’s of other shows.

Infinity Train: Book One is available to own on Digital. Digital purchase allows consumers to instantly stream and download all episodes to watch anywhere and anytime on their favorite devices. Digital movies and TV shows are available from various digital retailers including Amazon Video, iTunes, Google Play, Vudu and others.