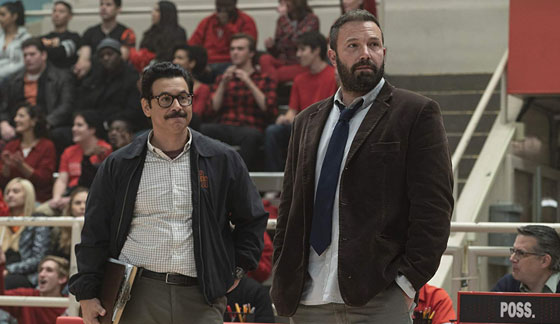 Having its release date delayed several months was not a good sign for the new sports drama “The Way Back” starring Ben Affleck. However, instead of just being another piece of cinematic rubbish that is typically released at the beginning of each year, “The Way Back” proves to be one of the greatest cinematic surprises in recent memory. With one of Affleck’s finest performances to date, this sports drama about an alcoholic who becomes a high school basketball coach ranks among the pantheon of such classics as “Hoosiers” and “Bull Durham.”

The life of construction worker Jack Cunningham (Affleck) has boiled down to this: wake up and have a beer while showering; drive to work while having another beer; work all day while drinking some more; drive back home while drinking; and then either drink a case of beer in his run-down apartment or drink himself into a stupor at a local bar. It’s a tragic life as he is clearly on a path to drinking himself to death.

One day, Jack receives a coaching offer from the priest who oversees his alma mater – a private Catholic school that is experiencing some hard times thanks to diminishing enrollment. We learn that once upon a time, Jack was a high school basketball phenom and was recruited by NCAA Division I programs. However, Jack walked away from basketball after high school and never looked back.

Reluctantly, Jack takes on the role, but he soon discovers that his team is less than stellar and his assistant coach (Al Madrigal, “The Daily Show”) is a math teacher with no real experience. There are some predictable things that subsequently occur, but for the most part, the story evolves beyond general sports clichés, which typically dominate this subgenre, and deals with real life issues, thus giving “The Way Back” substance over style.

Whether he likes it or not, Jack becomes a mentor to his players, particularly so for the team’s lone standout. Yet his newfound lease on life is shaky at best because of the underlying issues that remain, which are brought to the forefront again when his estranged wife, Angela (Janina Gavankar, “True Blood”) reaches out to him. Inevitably, Jack hits rock bottom in a painful and sad way.

Once upon a time, yours truly was offered a position as a basketball coach at a private high school. Strictly basketball speaking, Affleck nails the evolution of Jack’s growth as a rookie coach and as a mentor to young men, notwithstanding his profane tirades. Director Gavin O’Connor (“The Accountant”) also brilliantly captures the atmosphere of the little gymnasiums that these schools play in as well as bringing an authenticity to the depiction of games played.

Affleck has been open about his own battle with alcoholism in recent years and it is easy to see that he gave everything he had to the role. As the lone “star” of the film, Affleck lives up to the challenge with a fantastic performance as a man in great pain that is raw and authentic. In the end, like a Steph Curry jump shot, “The Way Back” is nothing but net.