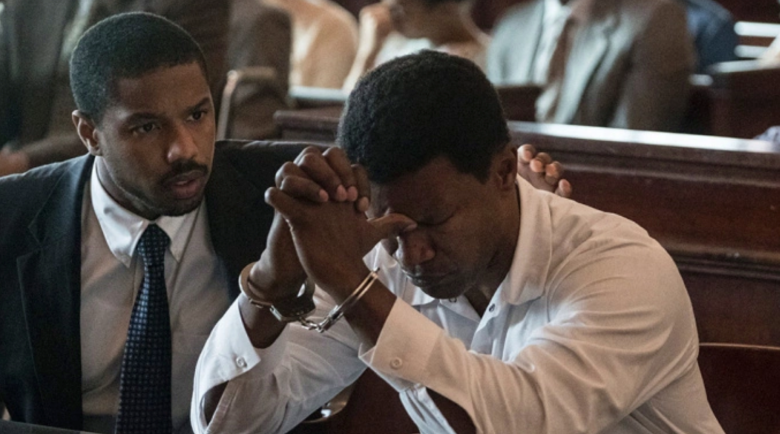 Recently here in Kansas City a gentleman was released from prison after serving 17-years for a crime he didn’t commit.  Naturally, your heart goes out to him and his family but, even in your worst dreams, there is really no way to understand what he went through.  I mention this because injustice is the theme from the new film “Just Mercy.”

Monroeville, Alabama.  Fans of the book “To Kill a Mockingbird” will recognize the town as the birthplace of author Harpee Lee.  It was also the birthplace of Walter McMillan.  We meet Walter (Foxx, in a top notch performance) in the woods, cutting down a tree and enjoying the freedom of nature.  However, Walter’s life takes a dark detour when he is arrested for, and convicted of, the murder of a young white woman.  I mention the victim’s race because that is an important part of the story.  You see, Walter is black.  Found guilty (in an amazing precedent the jury sentenced Walter to life in prison and the trial judge overrode the decision and sentenced Walter to death) he’s sat on death row for the past six years, waiting for the horrible dream his life has become to end.  Enter Bryan Stevenson (Jordan, equally strong) a young, Harvard-educated lawyer who has received a grant to start an advocacy program for inmates on death row.  To say Bryan is welcomed with open arms would be a lie.  More like welcomed with clenched fist – and closed minds.

A powerful film that pulls at your emotions, “Just Mercy” is based on a true story, one of racial bias and unscrupulous people.  It’s almost fate that the story takes place in the birthplace of “To Kill a Mockingbird,” That bit of information is played up by the locals, who urge Bryan to visit the Mockingbird Museum and stand in the same courthouse as Atticus Finch.  But “Mockingbird” also deals with the trial of an innocent black man, Tom Robinson, who is falsely accused and, even though there is mounds of evidence to prove his innocence, is found guilty.  Bryan, like Atticus Finch before him, believes in the system and can’t understand how that system has failed Walter.

As noted above, the performances from Mr. Jordan and Mr. Foxx are powerful.  Jordan continues to add great work to his resume’ and this is easily Mr. Foxx’s best performance in years.  As Bryan’s assistant Eva Ansley, Brie Larson delivers in a true supporting role and Tim Blake Nelson is well cast as a fellow convict whose testimony sent Walter to prison.  The film is well paced and Mr. Cretton’s direction is spot on, his camera capturing the little things that help make the story a powerful one.  He has definitely created one of the best films of 2019.