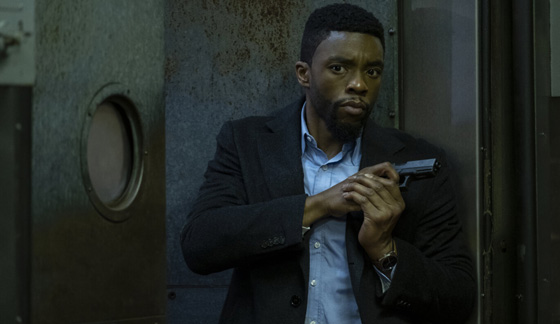 Perhaps the greatest consequence of watching the crime drama “21 Bridges” is how much it makes you appreciate actual great movies. Some of the words that come to mind while reflecting upon 99 minutes of what were presumably good intentions to make a quality film are predictable, stereotypical and cliched. Despite having a bankable star in the form of Chadwick Bosman (“Black Panther”) in the lead role, Irish-born director Brian Kirk (“Game of Thrones,” “Boardwalk Empire”) fails to make much of an impression with his first foray into feature-length films.

We meet Andre Davis (Bosman) when he is a little kid attending the funeral of his father, a NYPD officer who is described with such sappy, glowing prose that it is easy to feel like you are being hit over the head with a radioactive mallet. Unsurprisingly, when we fast forward 19 years, we see that Andre has grown up to become a driven NYPD detective with a history of fatally shooting his suspects. Some credit is due to Kirk because at least he tries to provide a glimmer of insight into Det. Andre’s motivations, but it is so fast-paced that neither he nor Bosman are able to turn the lead character into someone that is more than just a cliché cop.

Kirk does grab our attention for a bit when two military veterans – Ray Jackson (Taylor Kitsch, “John Carter”) and Michael Trujillo (Stephan James, “Race”) – pull a late-night heist that goes completely sideways. It goes so wrong that eight NYPD officers are gunned down. Of course, who is the first person called in to lead the investigation? You guessed it, the most famous detective in all of New York City. Everyone believes he will track down the two thugs and shoot them dead without any questions being asked. However, Det. Andre has some questions of his own as he begins all-night investigation the requires all twenty-one bridges leading into Manhattan to be shut down, thereby preventing the two gunmen’s escape.

Shockingly, Det. Andre doesn’t like having partners, but he is saddled with narcotics Det. Frankie Burns (a bland Sienna Miller) who often acts as a cheerleader as she roots for their prey to be shot down like dogs. The vice squeezes tighter on the cop killers as they try to figure out both a way out and how they ended up in the situation they are in. (We are left to wonder how they never seem to run out of bullets.) It all leads to a giant conspiracy that is so blatantly obvious that it would cause Sherlock Holmes to turn over in his grave, if such a thing is possible for a fictional character.

Kirk is consistent as he maintains his swift storytelling from beginning to end, which does occasionally give an artificial sense of suspense. His lone bright spot is Bosman, whose presence is about the only thing that makes “21 Bridges” watchable. Bosman does the best he can with material that should have had a team of writers to rework to prevent it from being something less than satisfactory. Oh, and Oscar-winning actor J.K. Simmons is in it but his character in the Farmers Insurance commercials is far more multi-dimensional and interesting.