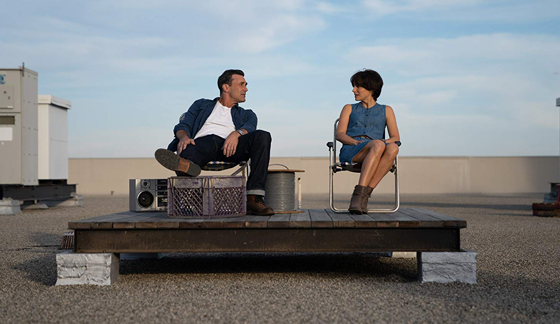 Like most North Korean missile tests, the disastrous melodrama “Lucy in the Sky” fails to achieve full lift-off and explodes into a million fiery pieces. Although we are told the story is inspired by real-life events, in truth it bears little resemblance to the bizarre 2007 actions of disgraced NASA astronaut Lisa Novak. Natalie Portman tackles her lead role with sheer abandon, but this turns into heavy-handed acting, resulting in an inability to take her seriously. First-time feature film director and co-writer Noah Hawley, whose previous directorial efforts have been limited to TV episodes of “Fargo” and “Legion,” has no sense of pacing as it veers aimlessly while making us feel like we just spent 40 days in the wilderness when it is over, which is the best part of the film.

Pushed by an alcoholic mother (Ellen Burstyn) to be better than everyone else, astronaut Lucy Cola (Portman) achieves a career pinnacle by spending two weeks on the International Space Station. Like a wide-eyed Major Tom, Lucy loses herself as she gazes at Earth during a spacewalk outside the station’s confines. (Lucy should go blind during this opening sequence because she stares at the sun without having her gold, protective lens down, but who cares about science?)

Upon her return to Earth, the childless Lucy immediately begins having problems readjusting to life with gravity. This includes her ever-increasing, distant relationship with her doting, religious husband, Drew Cola (Dan Stevens, TV series “Legion”), who seems to have been based upon Ned Flanders from “The Simpsons.” To her credit, Lucy does try to be a mentor to her teenage niece, Blue Iris (Pearl Amanda Dickson, TV series “Legion”), who looks up to her aunt as an inspiration.

Routine family life doesn’t cut it for Lucy as she becomes determined to go back into space, and along the way she starts an affair with fellow astronaut Mark Goodwin (Hamm). She views him as one of only a select few who understands her, but Mark is a playboy. So, when Lucy runs off the rails, he steps away from her and turns his attention to up-and-coming astronaut Erin Eccles (Zazie Beetz, “Deadpool 2,” “Joker”). The idea of losing Mark to another woman, who is also her competition for a seat on the next mission, pushes Lucy over the edge. Naturally, she hatches a plot to do a dirty deed dirt cheap while enlisting her impressionable niece as her help.

We are supposed to feel sympathy for Lucy as she struggles with her sanity, even after the story’s bizarre climax. However, this is a far-fetched idea by Hawley considering that if her plan succeeded someone would have probably died a violent death. As for the real facts, without spoiling too much and keeping it to a nutshell, Novak was married with three children during her approximately two-year affair with astronaut William Oefelein.

She was arrested in 2007 in Orlando for attempting to kidnap a U.S. Air Force Captain who had become romantically involved with Oefelien. Lastly, Hawley’s fumbling attempts at exploring existentialism throughout “Lucy in the Sky” are too muted to accrue any depth. He also under-utilizes Eccles and simply lets the film drag on far too long.