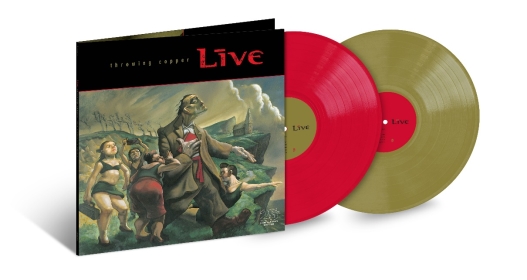 In celebration of Live’s momentous, platinum-selling album “Throwing Copper” 25th anniversary fans can now celebrate the album that started it all for the Pennsylvania-based band via a Special Edition double LP. First released on April 26, 1994, “Throwing Copper” transformed Live into one of the most lyrically impactful and instrumentally powerful bands of the modern alternative-rock era.

In the mid to late nineties it was almost impossible to turn on the radio or MTV and not hear or see a song/video from Live and the album “Throwing Copper”. As the follow up to Live’s 1991 major label debut “Mental Jewelry”, the album was a big step for the band hailing from the small town of York, PA and would spawn two No.1 Modern Rock singles (“Lightning Crashes,” “Selling The Drama”) and since been certified 8x multiplatinum by the RIAA, selling over 8 million copies. The 25th Anniversary release of “Throwing Copper” is a fitting recognition the monumental release and comes packed in a full color, dual gatefold sleeve with linear notes and is pressed on either standard black or limited edition red and olive heavy weight vinyl. Though no remixing and mastering was done to this package you do get 3 bonus tracks “Hold Me Up”, “We Deal In Dreams” and “Susquehanna” along with the track “Horse” which was included on the original release as a hidden track.

Revisiting this album in vinyl form was really a lot of fun. It instantly conjured up memories of when I had first heard some of these songs or when I was lucky enough to catch the band on one of their many college tours. Each track offered a warm, more natural sound than what I remember hearing on my digital version so that alone was worth the listen. The addition of the three bonus tracks was also a plus especial the track “Hold Me Up” which was featured in the Kevin Smith film “Zach and Miri Make a Porno”. If you every owned this album and reluctantly sold it to one of those “cash for cd’s” music stores that used to be popular around the same time as when this album first came out then I highly recommend you grab a copy of this album on vinyl as it will surely put a smile on your face while affirming that the 90’s weren’t all bad.

1. The Dam At Otter Creek