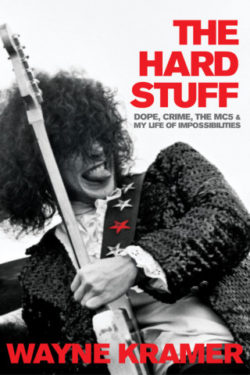 “The Hard Stuff: Dope, Crime, the MC5 and My Life of Impossibilities” is the story of legendary guitarist Wayne Kramer. From his childhood in Detroit where he found inspiration from the likes Chuck Berry and the Rolling Stones to his pursuit of “avant rock” with his group the MC5. Released via Da Capo Press “The Hard Stuff” is a 311 page biography recounting a life of rock and roll excess to prison confinement making all stops in between and any there-after.

As gritty as the ground breaking groups music “The Hard Stuff: Dope, Crime, the MC5 and My Life of Impossibilities” is a brutally honest, in-depth look at M5 founding member Wayne Kramer’s life. Told by the man himself Kramer recounts his upbringing in a home with an abusive stepfather and how he channeled his inner frustrations about the world around him into some of the MC5’s most notable material. Though I found the chapters recounting his time with the band the following chapters after the group disbanding was where my attention was really held. Kramer painstakingly tells of his time in prison after a drug bust and the years after in which he struggled with addiction up through reconnecting with his biological father.

“The Hard Stuff” is a roller coaster ride of emotion that keeps the reader interested and turning the pages. Not many people (if any) have had a life like Wayne Kramer and this book makes that abundantly clear. You don’t need to be a fan of Kramer’s music to enjoy this book as the author speaks his truth and does not shy away from darker periods of his life or difficult subject matter. For those hoping to catch the MC5 on the 50th anniversary tour this is the perfect foundation to help connect or reconnect with one of rock music’s most influential artists/groups.