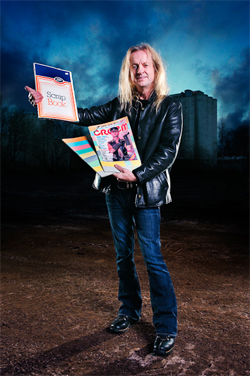 Ken “K.K.” Downing is a founding member of the heavy metal band Judas Priest. He was active with the group from its inception in 1969 to his departure from the group in April of 2011. Downing has recently released a book via Da Capo press title “Heavy Duty: Days and Nights in Judas Priest”. Media Mikes had a chance recently to speak with Ken about the creation of the book and where he plans to go next

Adam Lawton: Can you give us some background behind the writing of the book?

Ken Downing: Since my departure from the band eight years ago lots of people have been asking me if I would like to do a book. Year after year I just kept saying no and then finally last year I decided to finally do it. I sort of had three basic ideas for doing this. I thought it would be a good opportunity for fans to get to know me a little bit better. That probably sounds a bit ridiculous after having been around for so long now but, there is always another story to tell. I wanted to share how I started off in life and ended up playing some of the biggest stages in the world. Lastly I wanted to bring some sort of closure to the banter which was being thrown about across the internet related to my position within the band.

AL: How did you go about selecting what memories or stories you wanted to include in the book?

KD: That was really the difficulty part as I didn’t have a plan or anything. My ghost writer Mark Eglinton helped quite a bit with this side of things. He helped me dig a bit deeper along the way as we approached things chronologically as one lives life. As we moved along we paid attention to what would come to the surface and tried not to dwell on certain topics too long as we wanted to keep the book moving. If I had elaborated too much on things this would be a very thick book. (Laughs) It was difficult at times as I wanted to keep things honest and after forty years in rock and roll there were a couple stories we had to leave out. (Laughs)

AL: How did you get connected with Mark (Eglinton)?

KD: Mark came to me through my website which is run out of Helsinki, Finland. 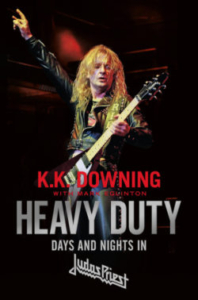 I had been approached previously by a bunch of other people about doing a book but Mark was in the UK and he made a couple trips down to see me where we just talked and got to know one another. I felt that worked well and we went from there. We did things in chunks based on a certain amount of years. That let me focus on one specific time period at a time. Mark and I would just basically talk. Every now and then he would prompt me to elaborate more on certain periods of the band. Both Mark and his brother have been rock fans for a very long time so he had a fans perspective of what other fans might want to know more about.

AL: Was it hard revisiting some of your earlier years growing up?

KD: It was. I had always kept a lot of those memories be it good or bad to myself. My childhood was very personal to me and I had never shared my experiences with anyone. To have someone hear them and then in turn document them for others to read was something I really had to think about. To keep things transparent we went ahead with it. I may have skirted around a couple things or been less descriptive but it’s all there. When you are born in to a dysfunctional family things are going to be a bit different so I didn’t have to go into too much detail.

AL: Had you let any of the people included in these stories know beforehand that you were releasing a book on your life?

KD: No not really. I had talked to my mom as I was a bit concerned she might get a little emotional about me telling the family story. As it happened when I spoke with her she told me she was not worried and she also mentioned she had read Ozzy Osbourne’s book and loved that one. (Laughs) When she did get the chance to read my book she affirmed that that’s how things were so I was pleased with that.

AL: Now that people have had a chance to read the book, are there any pieces you feel you should not have included or been so detailed with?

KD: I feel a little relieved now that it’s out and that I have not received any real adverse repercussions. The general feedback has been much better than I was expecting. Every now and then I think about other things I would have mentioned but didn’t. That seems to happen though be it with this book or records you always want to turn out the best product so you keep working and working at it. Eventually you just have to stop and turn it in. I wanted to put out something that people could get their heads into and find it just as enjoyable as watching television or something.

AL: With the completion of the book are you looking to now shift your focus back to music?

KD: I am thinking with the coming winter here in the UK I am going to disappear into my music room and just see what happens next. I have a few ideas I might want to play about with but this game for me is all about getting that chance to jump back into Judas Priest. If I am not doing that then the name of the game is creating new material.

For more in on Ken you can visit his official website at www.kkdowning.net

Be sure to check out our review of “Heavy Duty: Days and Nights in Judas Priest” here.