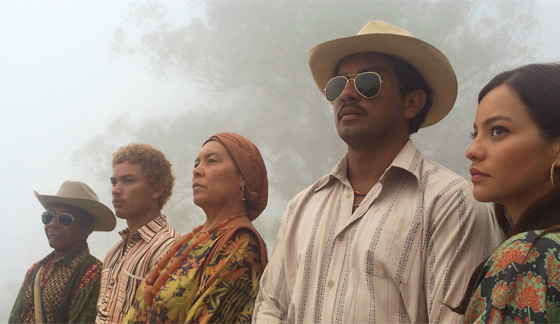 Operating with dangerous impunity from roughly 1976-93, the infamous Medellín Cartel of Colombia was once among the most powerful and notorious drug trafficking organizations in the Western Hemisphere. While it is hard to tell how much is fact, or fiction, the Colombian entry in this year’s Academy Awards, “Birds of Passage,” which did not make the final cut of five, does take us back to the humble origins of the drug trade in the years just prior to the Medellín Cartel’s savage rise. From the late 1960s to the late 1970s, “Birds of Passage” paints an intriguing, although uninspired picture of the native Wayuu people and how a desire to pay for a dowry turned into a bloodbath heated by blind revenge.

If you have never heard of them, the Wayuu are a Native American people from the Guajira Peninsula, straddling northern Columbia and northwestern Venezuela. Unlike many other native groups, the Wayuu were never fully conquered by the Spanish thanks in large part to their adaptation of using guns and horses. Their indomitable spirit is still reflected in the matrilineal society we are introduced to in the late 1960s when Zaida (Natalia Reyes, who is set to co-star in “Terminator: Dark Fate”), the daughter of protective clan leader Úrsula (Carmiña Martínez), is ceremoniously presented as being ready for marriage.

Rapayet (José Acosta) is a single man who announces his desire to marry Zaida through a “word messenger.” However, the dowry is steep. While contemplating his quandary, the unemotional Rapayet and his friend Moisés (Jhon Narváez) encounter some American Peace Corps members who are looking to score weed to take back to the United States. Rapayet seizes the opportunity and convinces his older cousin Aníbal (Juan Bautista Martínez) to harvest some whacky weed for the gringos. Not only do the profits allow him to pay the dowry, much to the chagrin of Úrsula who disapproves of Rapayet, but they also provide everyone involved a way to become filthy rich.

Greed begets power and power begets violence as Rapayet’s influence grows, but a pivotal moment involving the hot-headed Moisés has vicious repercussions for years to come. Additionally, the ancient traditions of Úrsula’s clan come under increasing attack from the new times they live in. It all comes to a bloody head that is reminiscent of something straight out of “The Godfather,” “Scarface,” or virtually any other organized crime-type of drama. And that’s a major problem with the film.

Directed by Cristina Gallego and Ciro Guerra, who previously worked together on the 2015 drama “Embrace of the Serpent,” “Birds of Passage” does contain a terrific, Shakespearean tragedy at its core. It is saddening to witness the meteoric rise and epic downfall of both a family and an ancient culture all at the hands of the illegal drug trade. However, it’s boringly predictable and the characters are stereotypes. Furthermore, the acting varies between being wooden and over-the-top with pacing that is sluggish at times. Take a pass on “Birds of Passage.”

One Reply to “Film Review: “Birds of Passage””