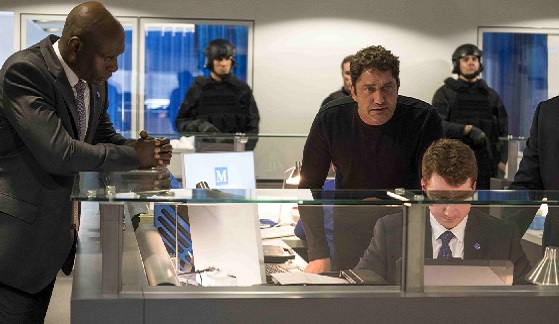 You ever have that moment where you’re surprised that something is popular enough to still be hanging around? You know what I’m talking about. Like when you hear about how “The Simpsons” has been renewed for another season or when Woody Allen released another movie. Much to my surprise, 2013’s “Olympus Has Fallen” has warranted not one, but two sequels. I don’t have to wonder too long about why that’s possible because the third of this franchise, “Angel Has Fallen,” answers that question quickly with mind numbing action.

In the reportedly final installment of this franchise, terrorists are making yet another assassination attempt. This time they’re not only targeting a worldwide figurehead, U.S. President Trumbull (Freeman), but they’re using U.S. Secret Service Agent Mike Banning (Butler) as the fall guy for the whole affair. So not only does Agent Banning have to find out who the real perpetrators are, while fighting them, but he also has to deal with various federal government agencies chasing him down. That’s about as simple as I can whittle down the absolute mess that this story is.

While the film’s story is fairly cut and dry, the foundation of the plot crumbles underneath any sight of logic, but this isn’t a franchise or movie that lends itself to being intelligent. Everything about these movies, as well as the newest one, is loud and dumb, like a caveman shouting at the top of his lungs while swinging a big club. The use of graphic blood and violence keeps these films from being too cartoonish, on a level like the “Fast and Furious” franchise. There are several moments of self-awareness, though, that make it seem like the creators are sometimes in on the joke that these movies are silly trash.

That’s why it’s so odd to see so many dramatic elements being wedged in, especially with Banning’s character. The filmmakers start the movie off with breadcrumbs that Banning is dealing with some form of PTSD and work fatigue, even though that plot thread only pays off in one predictable way by the end. We’re also introduced to Banning’s estranged father (Nick Nolte), who’s living in the middle of the West Virginia forests, so that we can add a layer of family drama to the whole shebang. By the end, these components really feel meaningless because of how poorly they’re handled, unless you’ve somehow managed to grow attached to this character over the years.

“Angel Has Fallen” fails only because it strives to be something it’s not, a competent action flick like “Die Hard” or any “Mad Max” film. It earns gold stars for filling numerous scenes with vacuous shootouts, lunkhead fist fighting and earth-rattling explosions. It somehow manages to screw up some of that though, with poorly lit sequences or chase scenes at night that fail to illuminate what’s happening. Fans of these films will get their money’s worth; everyone else will feel too indifferent by the end to ask for their money back.