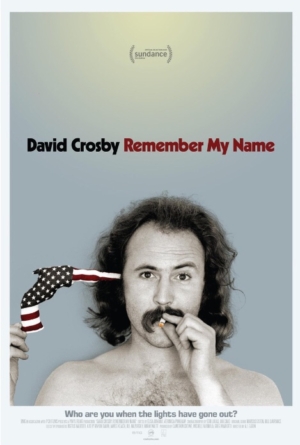 I met David Crosby in 1987.  He was backstage getting ready to perform on a Vietnam Veteran’s concert being taped for HBO.  I accidentally walked into what I thought was the bathroom only to find out it was his dressing room.  He was very nice and we talked for a few minutes.  Later that afternoon he, Stephen Stills and Graham Nash performed in (as always) perfect harmony.

Today, at age 72, Crosby is still on the road.  He has to be.  Though he was very successful during his time with The Byrds, Crosby, Stills and Nash (CSN) and Crosby, Stills, Nash and Young (CSNY), he is quick to point out that he is the only member of those bands who never had a solo hit record.  The new film, “David Crosby: Remember My Name” finds Crosby about to head out for a six week tour.  This saddens him, as he would rather stay home with his wife, Jan.  This saddens Jan, as she is aware of Crosby’s health problems and always fears that when he leaves for a show he will never return home.  But if there is one thing Crosby loves as much as his family, it is to sing.  So out on the road he goes.

An excellent combination of archive footage and interviews, “David Crosby: Remember My Names” is an outstanding film which reminds me, in style, of another documentary, “Glen Campbell: I’ll Be Me.”  This could be because the director of the Campbell doc, James Keach, is an executive producer here.  The film covers almost every aspect of Crosby’s life, both the highs (no pun intended) and the lows.

The son of an Academy Award winning cinematographer (Crosby’s father, Floyd, won the award for his work on the film “Tabu”), Crosby listened to his mother’s records and soon began playing the guitar.  When he got older, he became a co-founder of The Byrds, a very successful group.  However, due to some of his antics – including telling a concert audience that President Kennedy was killed as a result of a conspiracy – he was booted from the band.  He then teamed up with Stills and Nash to form one of the biggest super groups in music history.   We are shown a

Montage of drug fueled images from the period, including one with my friend Carl Gottlieb expounding on them.  (NOTE:  Carl helped David Crosby write his two volume autobiography, “Long Time Gone” and “Since Then”)  We also learn that Dennis Hopper based his character in the film “Easy Rider” on Crosby.  However, things begin going bad when Crosby’s 21 year old girlfriend, Christine Hinton, is killed when a bus hits her van head-on.  Heartbroken, Crosby finds solace in sailing – and drugs.   Later in his life, his addiction will send him to prison.

The film also allows Crosby to take the audience to Kent State University, where 4 students were killed on May 4, 1970 when members of the Ohio National Guard fired their weapons into a group of students who were protesting the war in Vietnam.  There is a cultural center on campus now, a museum dedicated to the images of that tragic day.  The emotion still wells up in Crosby’s voice as he describes how one leader in the National Guard swore he’d never fired his weapon, when a photo on the wall captures him doing just that.  Within a month of the shootings, CSNY release their song “OHIO,” which Neil Young wrote after seeing a LIFE magazine cover story on the shootings.  Neil Young has said that the event was so emotional that David Crosby wept while recording the song.  That emotion, almost 50 years later, is still obvious.

The film also includes footage of Crosby on tour, and his voice is just as sweet as it was in the 1960s.  He also shares some personal stories about such fellow musical icons as Cass Elliott, Joni Mitchell, Jerry Garcia and Bob Dylan.  If you’re a fan of Crosby, or just the music of the period, this film is a must see!