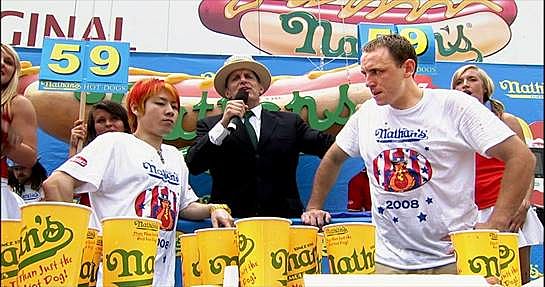 As the 4th of July approaches, many Americans will head to their backyards and throw some hot dogs on the grill. I know I am. And, if I’m particularly hungry that day, I might eat 3 of them. Which would in no way get me invited to Coney Island to participate in the Nathan’s International Hot Dog Eating Contest!

The contest has been going on since 1972, but it wasn’t until 2001, when a young Japanese man named Takeru Kobiyashi showed up and ate an amazing 50 hot dogs, with buns, in 12 minutes. He held the title for 5 years when, inspired by Kobiyashi’s success, a young man named Joey Chestnut took a chance at winning the coveted Championship Mustard Belt. He lost. Thus began an rivalry as intense as any in sports. And yes, Competitive Eating is a sport.

A very in-depth behind the scenes look at an event that draws 30,000 people annually, “The Good, the Bad, the Hungry” is another excellent film in ESPN’s 30 for 30 canon. Though I had certainly been aware of the annual Coney Island event, I was surprised to learn that competitive eating as a sport has long been recognized in Japan. We are introduced to early Kobiyashi gastronomic feats, like eating 19.6 pounds of food at one sitting. As the rivalry between Kobiyashi and Chestnut grows, so do the contests. I love me some Krystal hamburgers, but there is no way in hell I’m eating 97 of them. And their calorie intake isn’t the only thing that’s large. Chestnut has made six figures a year doing this.

What is amazing is that these two take their skill seriously. They train daily, everything from figuring out the right temperature of water to soak the buns in to training the various throat muscles to help swallow easier. We also learn about each one’s upbringing through conversations with their parents. While Chestnut’s parents are all for Joey’s achievements, Kobiyashi’s father is more subdued. Born after World War II, he notes that to him food is meant to be thankful for and appreciated. This doesn’t mean he isn’t proud of his son, of course,

Another thing noted are the cultural differences. Once Chestnut beats Kobiyashi, the Japanese man is shocked by the crowd’s sudden change. Where they had constantly cheered him, once defeated he is met with cheers of “USA! USA!” Not understanding American culture, his feelings are genuinely hurt.

I should add here that when he arrives in America, Kobiyashi is stunned at the size of some of the competitors. In Japan, most of the competitive eaters are thin. In fact, Kobiyashi only weighs 144 pounds and often celebrates his wins by pulling up his shirt and showing off his six-pack! If I won I’d be flashing a keg!

An entertaining film about an entertaining subject, grab a couple of hot dogs this week and pull up a seat in front of the television. Who knows, maybe you’ll be inspired enough to take Chestnut down nest year.