Foo Fighters
Sprint Center, Kansas City, MO
October 12, 2018
During an introduction a few years ago on CBS’s “Late Show with David Letterman,” the now-retired host said this about the Foo Fighters, “We can all sleep easy at night knowing that somewhere at any given time, the Foo Fighters are out there fighting Foo.” With founder Dave Grohl at the helm, Foo Fighters did plenty of that and then some in front of a packed audience for three wild hours on Friday night (Oct. 12) at the Sprint Center in downtown Kansas City, Missouri.
After hitting the multi-generational crowd with three songs – “Run,” “The Sky Is a Neighborhood” and “La Dee Da” – from their ninth studio album “Concrete and Gold,” Grohl, who somehow manages to not blow out his vocal chords, took a break from wailing to let drummer Taylor Hawkins perform an epic solo, which was upon a miniature stage that rose a couple stories above the main stage. This led into “Something From Nothing,” also from their current album, before Grohl and company – bassist Nate Mendel, guitarist Pat Smear, Hawkins, guitarist Chris Shiflett, and keyboardist Rami Jaffee – took the Sprint Center on a rock journey across their 23-year music career.
Using just the right amount of laser lights and other visuals to complement their music, the Foo Fighters often went on extended, improvised versions of such classic hits as “The Pretender” and “Learn to Fly.” Without missing a beat, the audience was impressively able to sing every song word for word when called upon by Grohl, who once again proved he is a master showman. Some singers can bore you to tears when they decide to stop and talk in between songs. Grohl is a brilliant exception. Even with plenty of f-bombs to spare, Grohl, much like he did while sitting in a guitar throne three years ago during their last Sprint Center appearance, kept his spectators engaged and entertained. 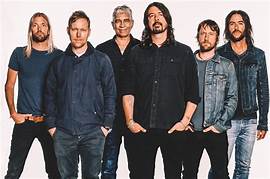 The Foo Fighters took a break from their hit parade to allow each band member to have their own feature solo. No one in the house was disappointed as they demonstrated masterful musicianship, highlighted by a fantastic rendition of “Blitzkrieg Bop” with Smear taking the lead and “Under Pressure” with Grohl on drums and Hawkins on lead vocals. However, perhaps no more fun was to be had than when Grohl explained how important music can be to healing differences with Jaffee playing “Imagine” in the background. With everyone expecting to sing along with the John Lennon classic, Grohl surprised everyone by doing Van Halen’s “Jump” lyrics to the music of “Imagine,” again showing their versatility and playful side.
The Foo Fighters wound up the raucous evening of pure American rock with classics “My Hero,” “Monkey Wrench” and “Best of You” before diving into a slightly surprising encore. It featured Grohl inviting an 11-year-old kid onstage to play “Enter Sandman” on guitar, which was to the gleeful delight of the crowd, before the group ultimately ended with mainstay “Everlong.”

SET LIST:  Run, The Sky is a Neighborhood, La Dee Da, Sunday Rain, Something From Nothing, Walk, These Days, Arlandria, The Pretender, Times Like These, All My Life, Learn to Fly, Breakout, Another One Bites the Dust, Imagine/Jump, Blitzkrier Bop, Under Pressure, My Hero, Monkey Wrench, Best of You.  ENCORE:  Enter Sandman, Dirty Water, This is a Call, Everlon.,