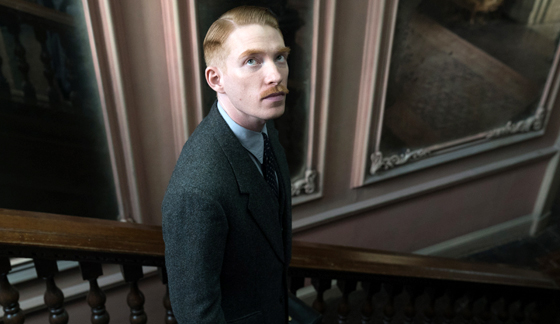 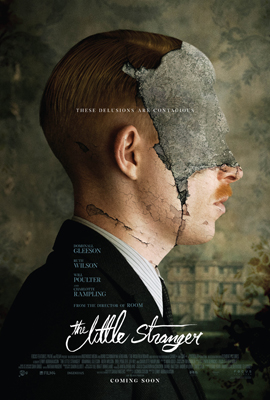 THE LITTLE STRANGER
Starring Domhnall Gleeson, Ruth Wilson, Charlotte Rampling and Will Poulter
Directed By Lenny Abrahamson
Rated R
Runtime: 1hr. 51mins.
Focus Features
The pitfall of turning a gothic tale into a feature film seems to be Hollywood’s tendency to sell it as a horror film. As most trailers do, they cram the most exciting visuals or scares into two minute bites hoping to draw that genre’s audience while never considering the ill will they’re potentially engendering with such a mischaracterization. It fascinates me as far as choices go in this age of Cinescore post-screening chatter although I can’t begrudge the trailer makers for their need to get butts in seats. I say this all up front because that is the case with Lenny Abrahamson’s The Little Stranger, an adaptation of the 2009 novel by Sarah Waters. What they really have is a carefully crafted and, critically, a glacially slow paced period drama where the “big” bloody moments are few and far between. To be clear, I actually am more of an ideal audience member for English period drama than horror but even my limits were tested. The talented cast languishes in beautiful atmosphere and effective sound design that amounts to a pile of supernatural McGuffins.
The year is 1949 and Dr. Faraday (Domhnall Gleeson) is summoned to Hundreds Hall to check in on the Ayres family’s young maid, Betty (Liv Hill). Betty isn’t sick so much as she’d like a doctor’s excuse to send her back home. The drafty house’s halls don’t sit well with Betty. This uneasiness is chalked up to youth and inexperience but as the doctor learns, her line of thinking isn’t isolated among the inhabitants. Roderick (Will Poulter), the man of the house and brutally scarred up WW2 vet, also swears by a malevolent presence that’s out for his family. Again, dismissed by the rational doctor as well as Roderick’s caretaker sister Caroline (Ruth Wilson). To complicate things, Faraday has a kind of reverence for the place having been enchanted by being brought there as a child in 1919 with his mother, then a member of the house’s full staff. Over all of this lies the spectre of Caroline and Roderick’s dead sister whom the young Faraday had a brief encounter with during that long ago visit. Faraday’s love for the estate drives him to grow closer to the Ayreses, Caroline in particular.
I was excited to check out The Little Stranger, being a fan of Abrahamson’s previous three films (all also adaptations) as well as Domhnall Gleeson who is consistently reliable. The trouble is The Little Stranger can’t quite decide what it wants to be. The awkward romance between Faraday and Caroline occupies far too much screentime for where it ultimately goes while the horror and supernatural aspects of the story pretty much plateau rather than ramping up to a satisfying conclusion. I couldn’t tell if said conclusion was actually meant to be a twist or not because I had connected the dots so so long before the story wended its way to meeting me there and when it arrived, did not add anything exciting. I suspect Waters’s novel made much of the turmoil the Ayres family finds themselves in in Hundreds Hall but the film leans too heavily on its production design to fill in the gaps of its stilted characters.